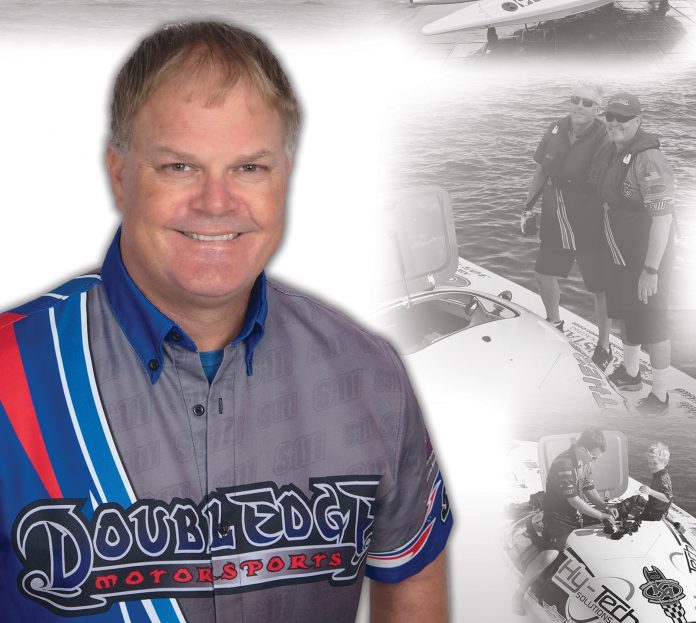 Ryan Beckley dreamed of being a throttleman and now he’s one of  the sport’s best.

As a kid growing up in Key West, Florida, Ryan Beckley always knew he wanted to throttle a race boat. He would be there to greet the race teams as they came to town every November for the World Championships with a notebook full of race boat drawings he had done over the year.

Beckley would give team owners and drivers the pictures, who in turn would give him some money or a T-shirt for his artwork. The youngster was like a sponge soaking up any wisdom the drivers and throttlemen would share with him.

“I thought it was the coolest thing ever, especially growing up down there,” Beckley said. “I always knew that I wanted to throttle a race boat.”

Now the 44-year-old is taking pictures with kids and hoping to inspire a new generation of offshore racers. Beckley is a fan favorite because of his affable personality and passion for the sport.

As the owner of DoublEdge Motorsports, Beckley has traveled the country living out his dream of racing boats for more than 25 years. Beckley campaigns a 30-foot Skater in Super Stock and consistently finishes near the top of the class. Over his offshore racing career, Beckley has collected two Offshore Powerboat Association World Championships, one APBA World Championship in Key West and was the Cat Outboard National Champion in the now-defunct Offshore Super Series from 2008-2011.

Beckley, who owns Kinetic Animation in Sarasota, Florida, has blended business and racing. His company produces high-performance vinyl graphics for boats and cars, which allows him to sell custom sponsorships for every stop he races on the Offshore Powerboat Association circuit. Beckley swaps out the graphics on the Skater so the local sponsor is featured prominently. The program has been so successful that local sponsors seek Beckley out.

“One of the things I’ve always said is if you get sponsors is always give them more than you tell them, more than you sell them,” Beckley said. “Give them more, something more because so many times I come across sponsors or approach a sponsor, they’re like, ‘Oh, well we did it before, but our sticker was only this big and they didn’t do what they said they were going to do.’ And that doesn’t help any of us trying to go boat racing.”

Drivers also pay Beckley to race and combined with the sponsorships, the racing program pays for itself. “We do it all in-house, we’re our own marketing agency,” he said.

During a race in St. Clair, Michigan in 2018, Beckley arrived at the fire station for the prerace morning physical. The next thing he knew, he was in an ambulance and spent four days in a Detroit hospital.

It was a dizzying turn of events for Beckley, who had gone from preparing to race to questioning whether he would be able to climb into a race boat again. Beckley had a resting heart rate of 147 beats per minute, far above the typical 60 to 100 beats per minute for most adults.

“They saved me, because honestly, I felt fine the whole time, that was the weird thing,” Beckley said. “And they’re like, ‘You sure you don’t feel like somebody’s standing on your chest, or you’re having a heart attack right now?’ I’m like, ‘No, I’m good. Why?”’

Doctors diagnosed Beckley with atrial fibrillation, an irregular heartbeat that can lead to blood clots, stroke or heart failure, according to the American Heart Association. Approximately 2.7 million Americans are living with AFib

Beckley underwent heart surgery and had two ablations—a process that destroys a small area of heart tissue—to stop the rapid heartbeat. “It wasn’t something that had been there a long time,” Beckley said of the heart condition. “They just don’t know what ended up triggering it right then.”

Beckley had to step out of the boat for the remainder of the 2018 season as he recovered and after getting a clean bill of health, he raced a full 2019 campaign.

Not only was 2018 tough for Beckley, it was hard on his boat too. Beckley let someone else race his boat for the OPA World Championships in Englewood, Florida, and they flipped the catamaran, which landed right-side up. The crash led to a host of problems with the race boat that the team was chasing well into the 2019 season. The season ended on a high note with OPA World Championship.

“To win straight up, to pass some great guys that are always out front, was really fulfilling to do that at the final race and make up for a really terrible year,” he said.

Living on Florida’s west coast allows Beckley and his family to enjoy year-round boating. The family boat is a 24-foot Skater that they run on the Gulf in Sarasota with his stepson Chris driving and his 6-year-old son Connor on his lap. Beckley’s wife Debbie, sits in the backseat.

Beckley met his wife indirectly through boating. He was at the Tampa International Airport waiting to fly to Dubai where he was going to race with Gary Ballough. Beckley struck up a conversation with Debbie, who seemed skeptical of his offshore race story.

“She thought I was full of (crap) when I told her that,” he said with a laugh. “She’s like, ‘No, you’re not.’ And she looked me up on Facebook that night.”

Their son Connor is following in Dad’s footsteps by racing BMX. Beckley was racing pro BMX when he founded Kinetic Animation in 1995 and quipped he was “either going to make a living at BMX or Kinetic, and it wasn’t going to be BMX.”

Sarasota has the oldest continuously running BMX track in the United States and bike racing is big in the community. Beckley said his 6-year-old is a far better racer than he ever was. “It’s amazing to watch him, how quickly he’s evolved and how good he is at it,” Beckley said.

On a day when most people are nursing a hangover, the Beckley family is out on the water with 300 fellow boaters to honor his late friend Joey Gratton, who died in an offshore racing crash in 2011. Beckley had started the informal fun run years prior with his friend John Smith but renamed it the Joey Gratton New Year’s Day Fun Run as a way to remember Gratton.

Beckley said Gratton’s family helped shape his life. Gratton’s widow, Priscilla, helped him get a loan to buy his first house when the bank wouldn’t lend him the money.

“She was one of the first people I called when I paid that house off, and I still own it today,” he said.

The first fun run attracted a dozen boats and for 2020, Beckley expected between 75 and 100 boats to participate. Boaters from as far away as New Hampshire and Michigan were expected to attend. “It’s a good excuse to come to Florida and get out of the cold somewhere else,” he said.

Having an event with 300 attendees has its challenges, especially on a holiday. The group meets for lunch at a specified restaurant, which Beckley set up, but otherwise there is no set schedule or registration.
“We did it many years before Joey had passed and Joey used to come to the run every year,” Beckley said.

Spend a few minutes talking to Beckley and you quickly appreciate his deep knowledge of offshore racing history. He can rattle off the names of the sport’s legends and the boats they raced. But one myth he hopes to slay is that offshore races decades ago had more than 100 boats per event.

“A lot of people throw numbers around of 100, 150 boat races. Those are mythical,” he said. “I mean, I’ve been doing this since 1982, I saw my first boat race. The number of hundred-plus boat races I can count them on my fingers, let’s just say that.

‘People would always say, ‘Oh, we used to have a hundred-plus boats,’ no, you didn’t. There weren’t really a hundred-plus races. There were a couple, but not very many. These races with 60 and 75 boats were huge.’

Beckley thinks offshore racing is in the best shape it’s been in 20 years, and he credits OPA and P1 Offshore for bringing professionalism and willing to listen to racers and make any changes that are needed. Most of the OPA races averaged more than 60 boats last season, albeit a large chunk were in the nonprofessional classes.

The race organizations have stayed above the political fray and that gives Beckley optimism for offshore racing’s future.

“There’s plenty of days when I’m like, ‘Why in the hell do I do this?’” Beckley said, “and there’s other days like winning, coming in, crying after I won at Englewood and that was the coolest thing ever.”