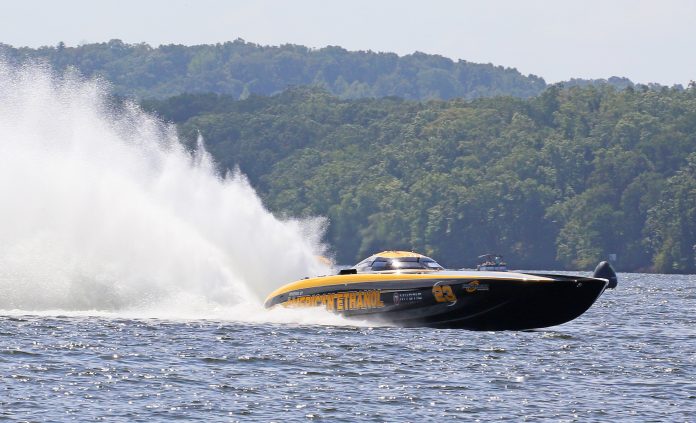 With a 207-mph pass during Sunday’s 34th annual Lake of the Ozarks Shootout, American Ethanol set a record and claimed its eighth consecutive Top Gun title.

Organizers ended up canceling the Sunday afternoon speed runs as rain and lightning moved into the area. The Shootout had record crowds on the water and at Captain Ron’s, the host for the event.

Driver Tony Battiato and throttleman John Cosker made two passes Sunday morning in the 51-foot Mystic Powerboats catamaran. Owner Don Onken turned up the boost on the Onken Racing-built engines producing a total of 8,000 horsepower. After turning a 199-mph pass, they returned to put up a 204-mph pass on the 3/4-mile course.

“They made some changes on the boat last night and I launched it a little bit differently than we had on (Saturday),” Cosker said. “Both engines just hooked up perfectly off the line and there was a slight hop to it, got it trimmed up and got it to fly. Really from 190 miles an hour up it was just pulling like a freight train. It was absolutely fantastic.”

Added Onken, “Our plan (today) was to turn up the boost and see what happens.”

American Ethanol did just one pass on Saturday with a 197-mph run.

The team set the previous speed record of 217 mph in 2017 but that mark was set on a 1-mile track. Organizers shortened the course the following year.

Shootout organizers were expecting to have a record number of runs this weekend, but the rain washed about five hours of passes on the course.

Look for a complete story on the 34th annual Lake of the Ozarks Shootout in the next issue of Poker Runs America.