The 2016 National Champions Dominated the Professional Classes at the Superboat World Championships.

After three days of offshore powerboat racing that started on November 9, Superboat International crowned its 2016 world champions the following Sunday and, for the first time in recent memory, every team in the professional categories that won the season-long national championship in its class also claimed the world title at the Superboat World Championships.

It’s a testament to the time commitment that it takes to excel in classes such as Superboat where the boats and engines are built to exacting specifications that make it difficult to get a mechanical advantage. It comes down the small details. “The more time we could get together in the boat definitely makes a big difference,” said John Tomlinson who throttled the 38’ Skater, Performance Boat Center to the world championship with Myrick Coil driving. In addition to winning all but one of the races on the national schedule, Tomlinson and Coil spent plenty of time testing the boat at the Performance Boat Center headquarters in Missouri. “It gave us time to try things,” said Tomlinson. “Some worked, some didn’t.” 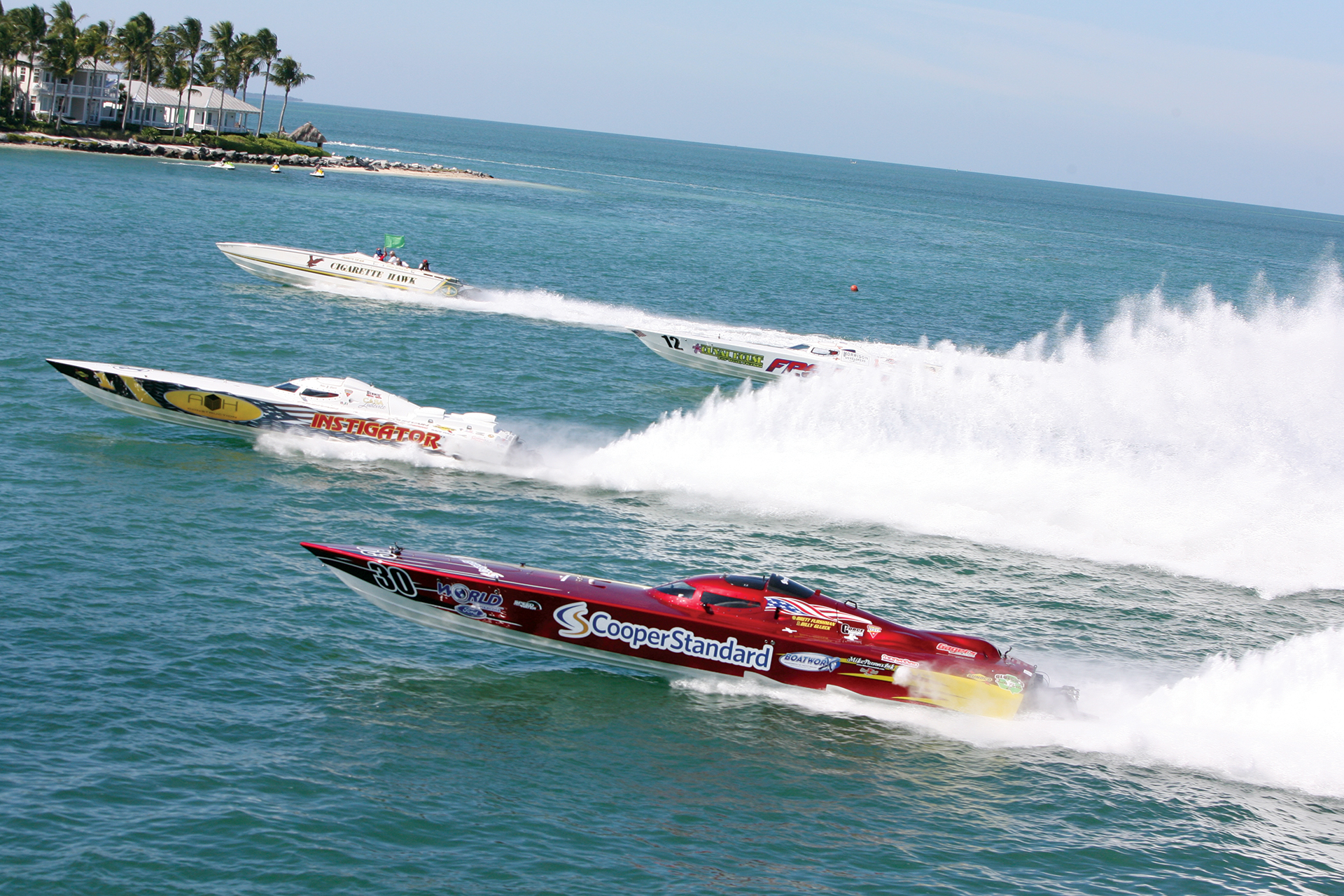 The Superboat World Championships are a stand-alone event with the competitors racing on Wednesday, Friday and Sunday. The team with the best combined results for the week wins the world title and, on many occasions, the championship isn’t decided until Sunday because that race is double the distance and worth double points.

Coil and John Tomlinson started off on a positive note on Wednesday when they got around owner/driver Billy Mauff and throttleman Jay Muller in their 40’ Skater, WHM Motorsports, on the last lap to take the checkered flag. They averaged 94.68 mph for the 41.9-mile race. The 39’ MTI, Pro Floors New Zealand, finished third on Wednesday. On Friday Tomlinson and Coil tried to line up on the outside of the course to avoid a crowded first turn, but they were facing the wrong way when the pace boat brought the boats up on plane. After a quick green flag, Performance Boat Center got caught at the back of the fleet and had to settle for fourth place. WHM took the Friday race while the 36’ Skater, Teague Custom Marine, with owner/throttleman Bob Teague and driver Paul Whittier finished second on Friday. Throttleman Grant Bruggemann and driver Jake Noble took third in the 38’ Skater, Stihl, placed third.

For Sunday, Tomlinson and Coil took the inside lane knowing that they needed to try to get to the front early. When the green flag flew, they got to the first turn just behind the 38’ Skater, Cleveland Construction, with throttleman Keith Holmes and driver Ed Smith. Conditions were tricky when the boats made the left-hand turn and Cleveland Construction appeared to stuff, setting off a chain reaction. Pro Floors New Zealand flipped and WHM hit the overturned boat, causing bottom damage to WHM. Pro Floors Driver Wayne Vlader and throttleman Chris Hanley escaped the accident without injury. Eventually Performance Boat Center got around Cleveland Construction and ran away with the checkered flag and the championship. Second on Sunday went to Bruggemann and Noble in Stihl, and that was good enough for them to claim third in the overall championship. Noble had taken over the driving duties for the Stihl team after his father, J.R., unexpectedly passed away earlier this year. WHM crossed the finish in third, taking second in the championship.

The world championship is a stand-alone event with the competitors racing on
Wednesday, Friday and Sunday.

In the Superboat Unlimited class, attrition on the final day of racing helped throttleman Jeff Harris and rookie driver Rusty Rahm complete Rahm’s dream season in the 48’ MTI catamaran, Wake Effects, which is powered by twin Mercury Racing 1650s. Rahm recently bought the boat from former owner Bob Bull and will campaign it again in 2017.

After a horrific 2016 season, the 44’ Victory catamaran Miss GEICO looked to have finally solved its mechanical issues by appearing to take the win on Wednesday. They averaged just over 110 mph for the 41.9-mile race, but were assessed a one-minute penalty. That moved the 48’ MTI, Team CRC Sunlight Supply, with owner/throttleman Mike DeFrees and driver Gary Ballough into first.

For the Miss GEICO team of driver Marc Granet and throttleman Scotty Begovich, Wednesday’s positive vibes were short-lived. They didn’t complete the required number of laps on Friday and didn’t even complete one tour of the course on Sunday, sustaining significant hull damage in rough water on the first lap. The 2015 world champion, Bob Bull’s 52’ MTI, CMS, finished second on Wednesday. With Bull driving and MTI president Randy Scism throttling, CMS ran away from the fleet on Friday, averaging nearly 5 mph faster than the second-place boat. Unfortunately, CMS succumbed to mechanical issues on Sunday and wound up third in the overall championship.

The most dominant performance of the week came in the Superboat Stock class. Even though owner/throttleman Ballough was teamed with a new driver, Darren Kittredge, in the 32’ Doug Wright catamaran, FJ Propeller, the team checked out at the start on all three days and ran away with the world championship. Second in the final tally went to Lee Austin and Damon Marotta in the 30’ LA Marine catamaran, Specialty Marine Center, while veteran racer Ryan Beckley and driver Tanner Lewis took third in the 30’ Skater, 5 Brothers Grocery.

In the Superboat Extreme class, Peter Meyer’s 40’ Fountain, AMH Construction Instigator, ran pretty much unopposed to the national championship, but the always fast 38’ Fountain, Cooper Standard, with throttleman Billy Glueck and driver Brett Lee Furshman started off the week with a convincing win on Wednesday. Their average speed was just under 91 mph. Second went to owner/throttleman Joe Ferrer and driver Jason Ventura in the 40’ Fountain, Freedom. After some confusion regarding the number of laps the team ran, Meyer and driver Johnny Stanch were awarded third place on Wednesday. On Friday and Sunday, Ed Smith replaced Meyer on the throttles in AMH Construction Instigator and he and Stanch dominated the class, running away with victories on both days, giving Meyer yet another world championship as owner. 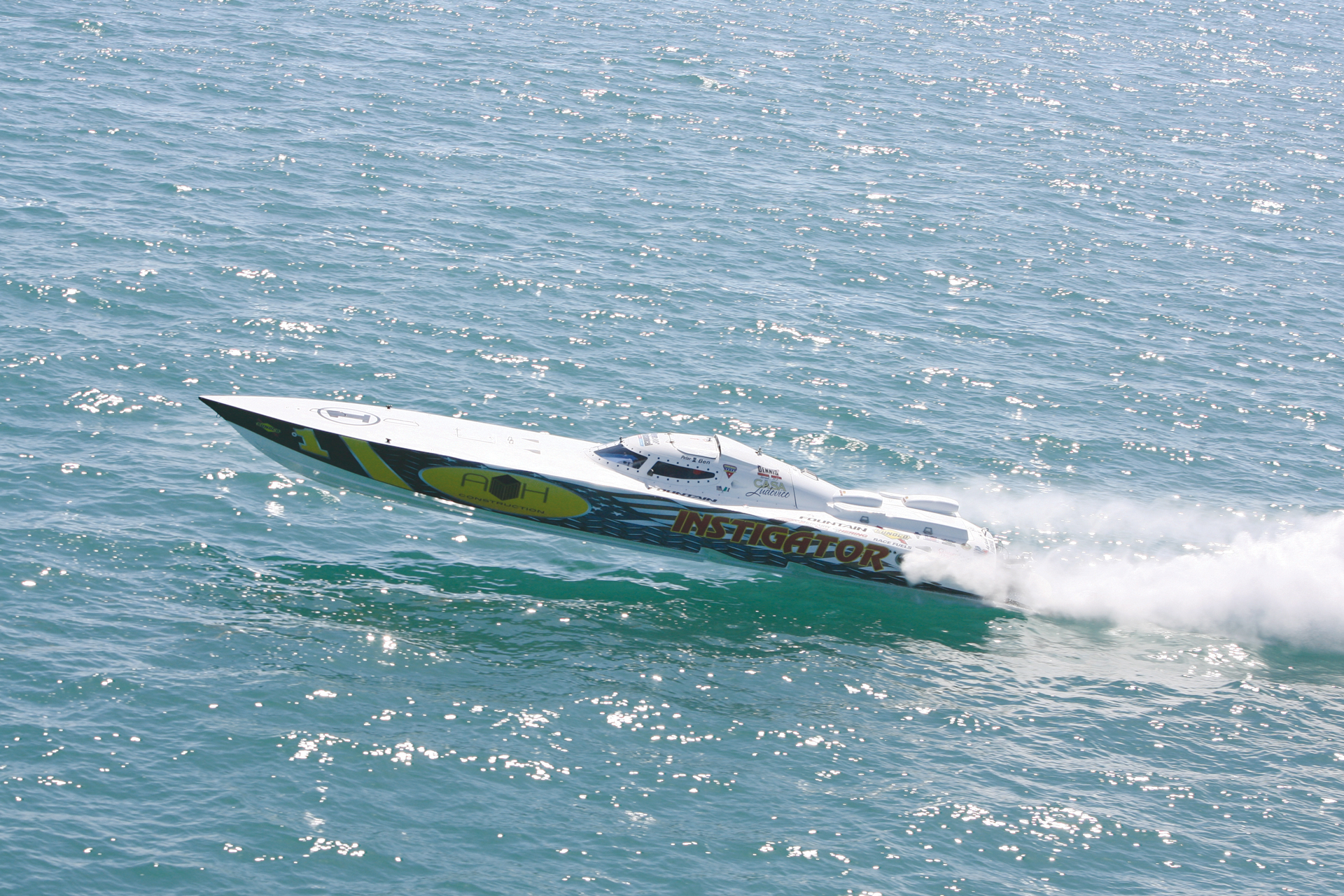 The Superboat Vee class was the most controversial of the week. On Wednesday, the super-fast 29’ Outerlimits, Marker 17 Marine, which is driven and throttled by Brian Forehand and navigated by Doctor Michael Jansen, did what everyone expected, taking the win. During post-race technical inspection, the team was disqualified, which moved throttleman/owner Steve Miklos and driver Steve Fehrman and their 29’ Extreme, Sun Print Magic Butter, into first place. The father-son team of Steve (dad) and Stephen Kildahl finished second in their 29’ Extreme, Boatfloater.com and national champions Britt Lilly and Ron Umlandt and their 30’ Extreme, LSB Rev-X Oil, took third. On Friday, Marker 17 Marine took the win again, but was out of the running for the world title. LSB Rev-X Oil  finished second followed by Boatfloater.com, so the championship was up for grabs on Sunday.

During the Sabbath-day race, Marker 17 Marine and Sun Print Magic Butter collided, which opened the door for the other teams to move up. LSB Rev-X Oil and Boatfloater.com battled for laps until the latter succumbed to mechanical issues and LSB Rev-X Oil claimed the world championship. For complete results, check out www.superboat.com