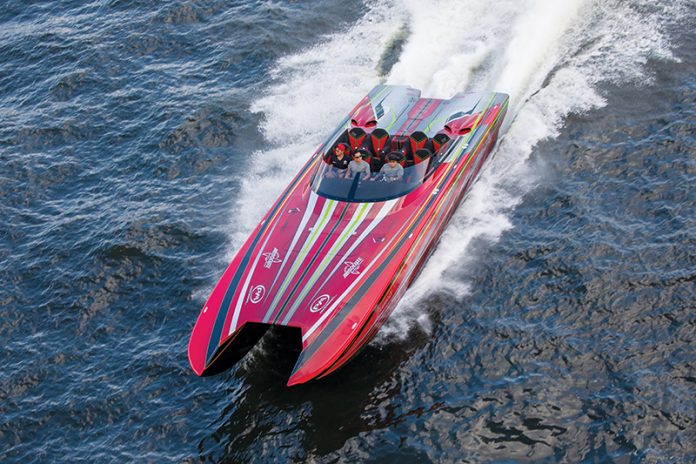 Photographer Jim Davis is on the hunt for the perfect image.

Jim Davis started out posting photos on Facebook so his mom could see his trips to Lake of the Ozarks in Missouri, and it turned into a passion for photographing go-fast boats.

Twelve years later Davis is still posting photos for his 86-year-old mom Harriet Schneider but instead of an audience of one, he’s built an audience of more than 32,000 followers on Facebook.

“I just started shooting some pictures with my drone and some videos and I wanted to kind of show my mom, who lives in Tennessee, what I did,” Davis said. “She’d always ask me, ‘What did you do today at the lake?’ So, I made this Facebook page so she could get on there and look at stuff. That’s kind of how it started.”

Whether it’s a poker run or fun run on the lake, there’s a good chance Davis is the guy in the helicopter shooting video or still photos. His work has appeared in countless publications and visit any of the waterfront bars on Lake of the Ozarks, there’s a good chance one of his photos is hanging on the wall.

By day, Davis works as a real estate agent in Iowa selling farm ground and then on the weekends, he makes the 3 1/2-hour drive from Ottumwa, Iowa to Lake of the Ozarks to take photos and meet up with his boating friends.

One of Davis’ first experiences riding in a powerboat was when his father-in-law took him for a ride in a 26-foot American Offshore boat that went well over 100 mph.

“I couldn’t believe it, the power and I was hooked with boats,” he said. “When we got down to Lake of the Ozarks, I’d never seen boats like that before and I wanted other people to experience what I saw.”

Davis always had a interest in photography and in high school was the kid who always had a camera. About 12 years ago, he got serious about his hobby and bought a Cannon camera and some lenses. He didn’t have a plan to get into marine photography, initially it was an opportunity to hang around the powerboats.

It’s one of the reasons that Davis loves to shoot poker runs and fun runs.

“They come here happy because it’s a vacation,” Davis said. “Everybody is in such a good mood and it’s so great to see people.”

Shooting photos or video from a helicopter going 100 mph isn’t for the faint of heart, but there are few other places the 58-year-old would rather be. Davis flies with pilot Tom Cline, owner of Tom Cline Helicopter based in Lake of the Ozarks. Both have worked together long enough, to know what is needed to get the perfect shot, Davis said.

When asked about one of his favorite memories shooting video, Davis said they were out in 2021 flying on the lake when they came across a kid running a 20-foot Baja for the first time without a parent in the boat.

“We shot him for 5 minutes and he was just balls to the wall. He had his hat on backwards and he was doing a great job,” Davis said. “About two days later, I got a call from his mom asking if I was in the helicopter taking video. It was the first time he had ever taken the boat by himself without his dad. We sent that video to him and they just cherished it. That was cool.”

Davis will be busy again this summer documenting everything from poker runs to the Lake of the Ozarks Shootout.

“It’s a good feeling when you capture some these moments,” Davis said. “I don’t care if you are an adult and if got a 42 MTI or a Sunsation, you’re like a kid when you see a picture of your boat or a video. You’re like a kid at Christmas.”

Primer for Visiting Lake of the Ozarks

Avoid Holidays
Holidays at Lake of the Ozarks can be especially busy with nearly 1 million people visiting the lake during the Fourth of July in 2021. With that many people, the lake becomes a giant washing machine, especially for smaller boats. “They would have a lot better time and wouldn’t scare them as much if it wasn’t during a holiday,” he said.

Take it Easy
Davis recommends spending a week at the lake to enjoy the area and visit the waterfront restaurants and bars. “You can boat anywhere on the lake no matter where you are during the week,” he said.

Favorite Spots on the Water
Lake of the Ozarks has tons of waterfront restaurants and bars. Among the places worth a visit are Backwater Jacks, Redhead Yacht Club, Fishing Company, Dog Days, Franky & Louie’s, Captain Ron’s, Coconuts at the Lake and Camden on the Lake. Typical bar food such as pizza, fish tacos and wings but fine dining is available. “People will find their personalities at different establishments,” Davis said.

Play it Safe
Lake of the Ozarks may be a big party during the weekend, but law enforcement has zero tolerance on the water when it comes to drugs and alcohol. Make sure to have a sober driver when bar hopping by water.

Lake of the Ozarks Shootout
For those who love powerboats but don’t own one, a trip to the Shootout should be on the bucket list. The 34th annual Shootout is set for Aug. 27-28 at Captain Ron’s with a series of events leading up to the weekend. A large no-wake zone is enforced on the lake to reduce rollers for the competitors.

“Ozarks” Wasn’t Filmed There
The Justin Bateman thriller “Ozarks” on Netflix is based in Osage Beach, Missouri, on the Lake of the Ozarks but it’s actually filmed in Georgia. The show still features exteriors from around the lake, Bagnell Dam and the famous “Welcome to the Lake of the Ozarks” sign.