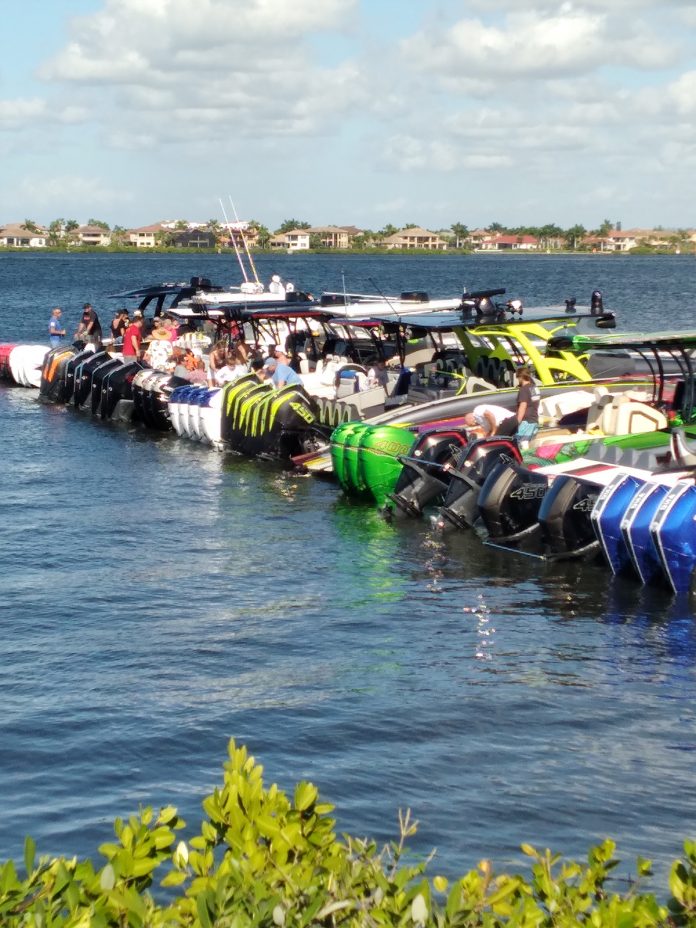 The fog had shrouded Florida’s Sarasota region in the days leading up to the Joey Gratton Memorial New Year’s Day Fun Run, and organizers could only hope Mother Nature would deliver sun on the day.

“I was afraid to open my blinds on Saturday morning to see fog,” said organizer Ryan Beckley. “When I saw it was sunny out, I just thought, ‘thank God!”

About 100 boats from around the country turned out for the Fun Run on January 1 to remember offshore racer Joey Gratton, who died in 2011 as a result of a crash at an offshore race in Key West, Fla. Ryan Beckley and friends had started the informal New Year’s Day Fun Run 20 years earlier as a New Year’s Day gathering but renamed the event following Gratton’s death. The Gratton family attends each year.

The Hyatt Sarasota was the de facto location for the week with the docks filled with Cigarettes, Skaters and MTIs. Participants arrived in town the day after Christmas and on Thursday before the Joey Gratton Memorial is the “Munyon Run,” affectionately named after Bill Munyon and his son Jack. The 60-mile run goes to Tampa Bay for lunch at Hula Bay Club. This year, the Munyon’s couldn’t participate in their own event because a starter failed on one of the Skater 368’s Mercury Racing engines.

On New Year’s Eve, photographer Pete Boden rented a helicopter to shoot photos of the participants running their boats offshore.

For the Joey Gratton Memorial New Year’s Day Fun Run, Beckley estimates about 100 boats made the lunch run to Caddy’s Bradenton, which has turned into the busiest day of the year for the restaurant. Because the fun run has grown so large, participants were encouraged to pick other lunch spots to ease the crunch.

“There’s no place that can take 100 boats,” said Beckley, who was joined by his wife Debbie and sons Chris and Connor for run. “We tell them here’s where we’re going to go and you can go to any of these areas and enjoy yourselves, but don’t everybody go the same place because none of them can take all of you.”

The fun run attracted boaters from the Northeast, Michigan and as far as way as California with Devin Wozencraft dragging bringing his 30 Skater to Florida for the week. Mystic Powerboats owner John Cosker made the trek to Sarasota from Florida’s East Coast to participate. Also in attendance were Todd Lamb from Spectre and Scott McCormick from Velocity Powerboats.

Celebrating its 10th anniversary, the Fun Run’s self-directed approach is a big reason why it’s grown to more than 100 boats. There’s no entry fee, and participants handle their own travel arrangements and dockage.

Beckley said the only organizational duties he has is to call the restaurant and have Graphic Ink in California print up the event shirts.

“People come up and tell me I need to charge a registration fee, and that I deserve to make money on it,” Beckley said. “I don’t care about that. That’s not my business. It’s only been the last 10 years since Joey (Gratton) passed, that we made it in honor of him because Joey used to come on the run every year. So it’s just a Fun Run, and the Gratton family loves it as a tradition.”