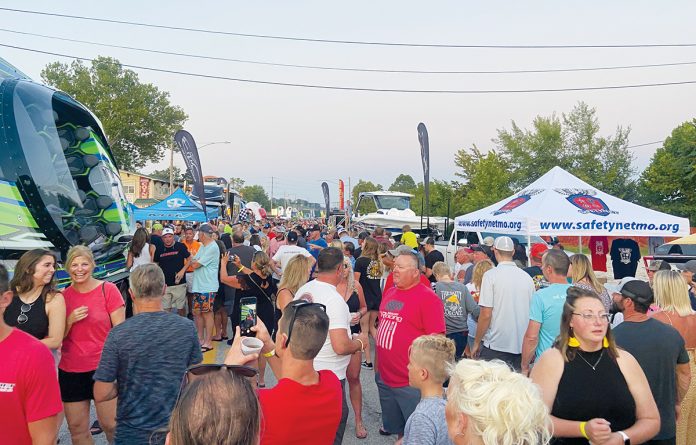 Thousands of spectators turned out Wednesday night for the Shootout on the Strip Street Party, the lead up to this weekend’s Lake of the Ozarks Shootout.

The street party had the largest turnout in the history of the event on Bagnell Dam Strip, organizers said. More than 100 boats, from pontoon boats to go-fast catamarans, lined the road for than a mile.

“I’ve been to a lot of these street parties over the years,” said Randy Kent, owner of DEFCO Trucks. “This is the biggest I’ve seen. It’s impressive to see how this event has grown.”

Kent had a display that included a McLaren car, helicopter, Renegade center-console boat, and a display from Marine Concepts, a company he founded in 2005 and sold two months ago.

Marine Technology Inc. had the largest setup on the strip, featuring numerous catamarans and center-console models. Lake of the Ozarks is the home waters for MTI, which is built in nearby Wentzville, Missouri.

Shootout on the Strip organizers had to turn away boat companies that wanted to participate for the first time in the event’s history. Bars and restaurants along the Bagnell Dam Strip were packed with spectators enjoy the warm summer night.

“This event is where a kid comes to dream,” said Jim Tate, who was visiting from Kansas City, Kansas. “This is probably my fifth or sixth Shootout and this is the highlight for me. I can go up and touch the boats, talk to the boats owners and appreciate these machines.”

The Shootout on the Strip is one of the most popular events leading into the Shootout on Saturday and Sunday at Captain Ron’s Bar & Grill. Organizer Ron Duggan expects more than 100 boats to take turns putting up speed laps on the 3/4-mile course.

“We expect another 30 to 40 boats to register (for the Shootout) by the weekend,” Duggan said. “We should be at where in past years if not a few more boats.”

Lake of the Ozarks Shootout has grown from a two-day event to a month-long series of events leading up to the weekend. The Shootout on the Strip is one of several bolt-on events that has helped the Shootout grow in popularity since it was founded 34 years ago.

Last year’s Shootout raised a record $445,000 for charity and the event has raised millions of dollars over the years for charities around the lake.