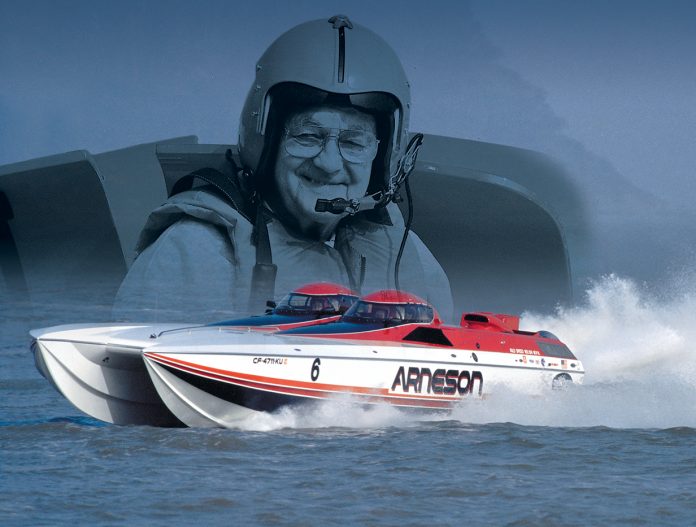 For most of us breaking the 100 mph mark on the water is a monumental achievement. Few boats can reach these speeds and even fewer can maintain them. Howard Arneson’s life on the water begins at 100 mph. Arneson has probably spent more time on the water at speeds over 100 mph than any man in history. Based on a small fraction of the time recorded on the hour meters in two of his boats, to account for engine warm-up, maintenance and idling time, Arneson estimates that he has travelled more than 80,000 miles at such speeds. His world famous turbine powered catamarans have achieved speeds over 170 mph. To Arneson, cruising at speeds over 130 mph is like a walk in the park.

Howard Arneson made his impact on power boating with the development of the surface drive that can be steered and trimmed, and bears his name. A surface drive operates with its propeller partially above the surface of the water. This affords less appendage drag as well as a reduction in cavitation because the propeller is vented to surface atmospheric pressure. The result is an extremely efficient drive system for high-speed applications.

Arneson introduced his drives to offshore racing in 1980 and in the early 1980s dominated the racing scene. Today, most of the drives used in offshore racing and high-speed pleasure boating are surface drives.

Howard Arneson is a fascinating gentleman. He’s a combination of innovator, inventor, entrepreneur, scientist and artist. His knowledge and experience in high speed power boating is unique. He holds 18 patents in a broad range of fields, including an emergency vehicle light, a swimming pool sweep, the Arneson surface drive and a rocker plate that provides rocker or hook for boat trim (See Performance Alley in this issue). His success with the swimming pool sweep has given him the independence to apply his mind to his favorite hobby, high speed boating.

Arneson was born on May 25, 1921, in Benicia, California, a seaside city north of San Francisco. Growing up near the water, he was interested in boats as far back as he can remember. His first job was with a gold dredge manufacturer. He also worked at a nearby naval shipyard and entered the U.S. Navy as an aviation gunnery instructor. In this capacity he taught and trained pilots in skeet and trap shooting to familiarize them with shooting at moving targets. A world class shooter, Arneson won the California State Trap Shooting Championship in 1947.

After leaving the Navy, Arneson sold color televisions for Sears and Roebuck when they first became available and raced 225 cubic inch hydroplanes. His racing career was short lived when he flipped his boat and woke up in the hospital.

Soon after, Arneson was hired to work on a project to develop a system to clean swimming pools. After completing the project and selling the system, he developed and patented a swimming pool sweeper. This product was extremely successful and, in 1969, Arneson sold it to Castles & Cook, owner of a number of companies including Dole Pineapple Corporation. He had a five-year contract to manage the business but was so successful that he stayed with the company for 12 years before he retired.

As the pool sweep business grew, Arneson was able to afford more boats. He bought a 47-foot Concord Cruiser, a 28-foot Magnum, and a 36-foot Cigarette offshore race boat, Boss O’ Nova. He ran the Cigarette for four years and in 1977 ordered a 40-foot Arena Craft with fixed-shaft surface drives. Arneson raced the new boat at Newport Beach, California. The boat began to delaminate and didn’t finish the race. The surface drives provided good speed, but handling was not the best.

Following the teachings of  Sonny Levi, who is credited with the development of  vee-bottom boats with increased deadrise in forward sections, convex sections and lifting strakes, Arneson believed in the surface drive concept.

In 1979, he purchased a 38-foot Scarab and installed the fixed-shaft drives. After testing this boat it became evident that the inability to trim the drives was a handicap. While in theory, a boat can be set up to run and handle efficiently with a fixed-shaft drive, changing sea conditions and varying boat weight distribution often make this difficult. A drive that can be trimmed and steered increases operator control to optimize performance in varying conditions.

Arneson began development of a surface drive that could be trimmed and steered. In 1980, he ordered an 18-foot Arena Craft and installed a prototype of his patented Arneson drive. The boat ran great. It handled well and reached a top speed of 78 mph with 280 horsepower. The Arneson drive was born.

Arneson ordered a custom 38-foot Cougar Cat to race with his new drives. The boat was rigged and throttled by Terry Laughlin in California, and driven by Tony Garcia. Keith Hazel and Sammy James shared throttling duties. The boat, “Arneson”, won nine successive races and the World Championships in Open Class in 1983 and 1984. At the end of its first season, Arneson sold the boat to Bernie Little who raced it with Tony Garcia driving and Sammy James throttling.

In 1984, the world champions in Open, Modified and Sport classes all ran with Arneson drives. Arneson drives were designed in different sizes to handle the full range of power available to the race and pleasure boat markets.

Arneson licensed Borg-Warner to manufacture the smaller drives with input torque below 750 lb/ft and retained the rights to manufacture the larger drives in his company, Arneson Marine. He sold this company, with its manufacturing licence, to Castles & Cook. When they divested themselves of their non-food businesses, Castles & Cook sold Arneson Marine to an investment group lead by Craig Dorsey.

When Borg-Warner consolidated their holdings, they sold the small drive business to the same group of investors. In 1990, the investment group sold their holdings to Bill Bennett of the Circus Circus, Excalibur and Luxor hotels in Las Vegas. The drives were manufactured in Henderson, Nevada until 1993, when the company was sold to Racine, Wisconsin-based Twin Disc, the current manufacturer.

Arneson still owns the patent. Because of their great efficiency and ability to handle high torque input, the majority of drives produced are sold to the large pleasure yacht market.

Arneson continued to use and promote his drives. During the mid 1980s, he bought a custom 50-foot Cougar Cat, constructed in wood, and powered by four engines outputting into two Arneson Drives. The boat was later purchased and raced by Tom Gentry, and set the world Superboat record at 149 mph. This boat pioneered the four engines into two drives concept in racing.

Al Copeland, Joe Mach, Fabio Buzzi and Dan Campbell have since incorporated this concept in their Superboats. Copeland’s boat, equipped with Arneson drives, was driven to a win by Chuck Norris in a race in Long Beach, California.

Around 1986, Arneson became interested in gas turbines. He rebuilt a 450 hp Boeing turbine and installed it in a 23-foot deep-vee Arena Craft. As the boat gained speed, it ran out of bottom. The boat became unstable and Arneson recalls having to back off the throttle. To avoid this problem he purchased a 29-foot Sanger catamaran.

The result was outstanding. Powered by an 850 hp Pratt & Whitney gas turbine, the boat, “Alley Cat”, ran 127 miles per hour. Arneson built and sold four more of these boats. To date he has built 16 turbine powered boats, of various sizes and configurations for such famous clients as the ruling family of Dubai, Bill Bennett and Al Copeland.

In 1990, Arneson built a 32-foot Skater with a 1,250 hp GE gas turbine to race 1,039 miles up the Mississippi River from New Orleans, Louisiana to St. Louis, Missouri. On September 20, 1990, at the tender age of 69, he won the race in 12 hours, 40 minutes and 50 seconds, eclipsing the previous record by seven and one-half hours, a truly amazing feat. Arneson drove and throttled the entire race by himself.

Looking back, that had to be one of the highlights of my career,” said Arneson. “We made four fuel stops, passed through the huge wakes created by some 200 to 250 tow boats and barges, and still averaged 82 miles per hour. We had to be running continuously at speeds in excess of 100 mph. When we completed the race, the engine readouts were exactly the same as when we started.”

The stress on man and machine had to be at least as great as competing in the iron-man triathlon. There is no doubt that this has to be one of the greatest accomplishments in boating history.

Arneson’s next boat was a 40-foot Skater with twin 1,350 hp GE T-58 turbines. The boat consistently hit speeds near 160 mph. Arneson recalls the tremendous amount of testing on this boat.

Arneson at that time completed a 46-foot Skater powered by a single 4,500 hp Lycoming gas turbine. The boat was still in testing and not yet dialled in. Arneson has seen 170 mph and hasn’t had it at full throttle. He thinks that he will see 180 mph when the project is completed.

That past December, Howard and wife Eva celebrated their 47th wedding anniversary. The Arnesons have a daughter, Christine.

“Eva is a great lady. She has supported me in all of my activities. No other person could put up with my life style,” he says.

Howard Arneson’s accomplishments in boating are legendary and, at 77, he’s far from finished. His shop is like a laboratory, stocked with prototypes of many of his inventions. He is currently working on what he believes is a revolutionary breakthrough in propulsion systems.