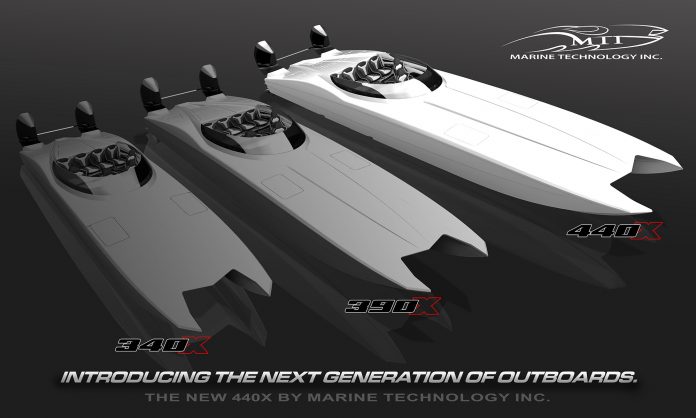 Just when it seems that outboard catamarans can’t get any bigger, Marine Technology Inc. is working on a 44-foot catamaran the Missouri company hopes to debut in early 2023.

The 440X catamaran will join the 340X and 390X pleasure versions in MTI’s outboard lineup. MTI owner Randy Scism introduced the 340X in 2016 and followed it up with the 390X three years later. Scism pressed on with the model even though the company has a substantial backlog. MTI reportedly had eight boats on order even before the announcement of the MTI 440X.

The 44-foot catamaran has already gone through design and tooling with MTI building hull No. 1, which is slated to debut at the 2023 Miami International Boat Show. The MTI 440X will feature a larger cockpit with seating for eight people as well as an updated dash and side panels.

MTI isn’t saying what the power will be for the new model, but its smaller 390X sibling has twin Mercury Racing 450R outboards. Mercury Racing is rumored to be working on an outboard with higher horsepower and would pair nicely with the MTI 440X.