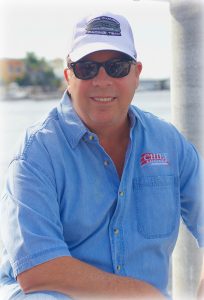 Paul Reddish was running his 44’ MTI catamaran at the Poker Runs America Cape Coral Poker Run on October 15 at about 120 mph. His wife, Lisa, and 11-year-old son, EJ, were riding with him. A 48’ MTI passed him at an estimated 140 or 150 mph. Like any 11-year-old, EJ looked over and said, “C’mon dad, let’s go.” Reddish laughed and said, “No son we’re fine right here.” Reddish didn’t want to tell EJ that he couldn’t have caught the bigger boat even if he wanted to, but EJ still didn’t let his dad forget that he had been passed for the rest of the day.

A veteran of performance boating, Reddish, 59, takes a conservative approach to going fast on the water. “I have no desire to be the fastest one out there,” he said. Reddish just loves to be on the water.

The water is where Paul Reddish feels most at home. The family lives in Meredith, N.H., on Lake Winnipesaukee during the summer and in Naples, Fla., during the school months so attending the Cape Coral event, which was the last one of the Poker Runs America 2016 season, was easy. In addition to E.J., Paul and Lisa also have a daughter, Anna, who is 18 and attending college in Florida. A successful entrepreneur, Reddish is managing partner at ProMed Waste Solutions, the largest privately owned medical waste processing company in Florida. Prior to ProMed Waste, Reddish built up and sold the largest privately owned refuse company in Florida, starting in Marco Island, Fla. with one truck and winding up with more than 125 statewide.

He grew up in the business. Reddish’ father Edward was in the landfill business in the Boston area and his mother Elsa is a homemaker. Edward Reddish passed away about 12 years ago and Elsa is still alive and splits time between Naples, Fla., and Wellesley, Mass. There were six kids in the Reddish household and they were all active. One brother played baseball in the Yankees and Orioles organizations while another won a Division Two national championship in hockey at Rochester Institute of Technology and a third played four years at Holy Cross University.

Paul Reddish played high school sports, but unlike the rest of his siblings, he was drawn to the water at an early age. “I just always had a passion for it,” said Reddish. “I grew up watching offshore racing anywhere I can find it.” His parents owned a home in Marco Island, Fla, so he was boating as much as possible. His first boat was a Formula 206 LS with a 350 MerCruiser stern drive and open exhaust. “I thought I was a badass until I ran offshore in that boat the first time,” he laughed.

He saw a 30’ Scarab Panther at Shep Brown’s Boat Basin at Lake Winnipesaukee and traded in the Formula. He took the Scarab down to Marco Island. “I was buzzing along, having a good day and someone passed me in an Apache and it was love at first sight.” Before he would get his own Apache, he bought a new 38’ Fountain Fever from Ralph Martin at Everglades Marina. He did a poker run with Martin and when a couple of Apaches pulled into the docks, Reddish said, “I gotta have one of those.”

Reddish bought a 41’ Apache powered by twin 850-hp Carolina Racing engines with MerCruiser Number III drives. The boat was called War Party. Like so many performance boaters, moving up to bigger boats was in his blood.

He kept War Party for a number of years and then started a pattern that Reddish would continue for many years. He sold the boat and bought a Sea Ray 380 Sundancer with a pair of diesel inboards. “

I decided I had enough of fast boats,” said Reddish. “I kept that for a year or two but I couldn’t handle going everywhere at 20 knots.”

Starting another behavioral pattern, Reddish bought another 41’ Apache, called Flying Falcon. It was powered by twin 850- hp fuel-injected Open class racing motors with Mercury Hi-Performance Number Six drives. Known as a six-pack boat, it had six standup bolsters and a half cabin. He took the boat to Marc McManus at Apace Powerboats and spent $400,000 to have the interior re-done and have Chief engines build a pair of 950-hp pleasureboat motors. “If I buy a boat new or used, I rip it apart and go all through it,” said Reddish. “If you don’t spend the money and go through it, you’re going to have problems soon enough. ” Once Flying Falcon was finished, Reddish said, “With six people in the boat, we could run 90 to 94 mph all day.” He sold the boat through Mark Adams of Marine Management to a dealer in Europe who still races it off-shore and has been quite successful.

At the same time, Reddish also owned a Fountain 38 Tournament Edition center console powered by triple outboards. That was his every day boat while the Apache was for poker runs and weekend hot rod trips.

In 2009, Reddish bought his first new catamaran from Marine Technology Inc. in Missouri. Larry Goldman of Xtreme Powerboats put the deal together and Reddish developed an instant appreciation for the boat’s handling and fit and finish.

Once again he thought he was done with going fast and Reddish traded in his MTI to David Woods at Pier 57 for a Cigarette 39’ Top Fish powered by four Mercury outboards. He ran the boat for a while and enjoyed it, but he missed the ride and feel that can only come with a catamaran. Another new MTI wasn’t in the budget, so he heard about a 40’ Skater SS that was available for the right money and he bought that boat.

Reddish ran the Skater with the motors it came with until one blew up. Then it was time for a redo. He sent the boat to Grant Bruggemann at Grant’s Custom Rigging to have it gone through. The upgrade includ-ed a pair of 1,250-hp Cobra Power engines. In addition to participating in some poker runs in the Skater with his friend, offshore racer Wayne Courson, the duo teamed up for Reddish’s first and only experience racing offshore to date. They competed in the 2009 Miami to Bimini race. After starting at the back of the fleet because Reddish was a rookie, they finished in 61 minutes averaging around 115 mph. Reddish said that experience definitely has him thinking about doing some more offshore racing in the future. He wants to start in the outboard-powered Super Stockclass because he wants to gain experience and work his way up to the Superboat class.

After losing some friends in what has been a difficult summer for the performance-boating community, Reddish said the accidents have made him think. “If we want to stay in this hobby, we can always be more careful, but I’m still going to go boating,” he said.

He’s enjoying his 44’ MTI, and said his next move would be to a 48-footer powered by twin Mercury Racing 1350s.

Regardless of the boat he owns, Reddish will always find his escape when he takes to the water after putting in a 12 or 15-hour work day. “It’s a passion. You either have it or you don’t,”. he said. “My release is when I’m running 100 mph.” And if a boat pulls up alongside challenging Reddish and his co-pilot EJ to a race, don’t expect him to take the bait.