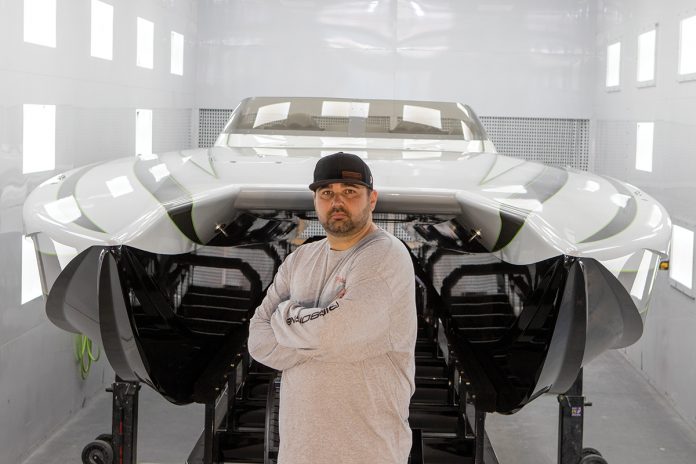 Canada’s Krytiuk Motorsports is perfecting the art of the paint job.

Mark Krytiuk knows the frustration of getting good service and finding the right shop to do paintwork as the owner of several powerboats.

It’s one of the reasons he launched Krytiuk Motorsports about three years ago to raise the level of painting, rigging and service in Canada. Both U.S. and Canadian boaters have taken notice of the work coming out of Krytiuk’s shop in Penetanguishene, Ontario, about 90 minutes north of Toronto.

“I was an enthusiast long before I had my own shop and I didn’t like missing poker runs because the (shop) owners would say, ‘We’re going to do this and they don’t,’” Krytiuk said. “We have such a short season up here, you can’t lose a lot of time. You have a couple of weddings and a couple of rain weekends, and that’s what is left to enjoy these toys that we spend a lot of money on.”

As the owner of seven powerboats and a motorsports business, Krytiuk has a unique perspective on the industry. Originally, Krytiuk started the shop to look after his own equipment and realized there were no shops that could paint large boats.

“With the number of boats, racecars, trucks and trailers I had it got to the point that I was able to hire a mechanic and painter for my own projects,” he said. “It then quickly morphed into a business because my friends heard we had a painter in-house that can actually do phenomenal work.”

One of those friends is offshore racer Cole Leibel, who hired Krytiuk to paint one of his boats (a 34’ Nor-Tech center console) and completed fiberglass and paint corrections on four of his other boats.

Besides painting for the Leibel family, other notable projects include giving a modern update to the Speed Racer-themed MTI catamaran. One of Krytiuk’s favorite projects has been the restoration of the offshore racing boat Airborne Marine.

Krytiuk purchased the catamaran built by the late Randy Linebach and set up Airborne Marine out of his facility in Penetanguishene. The project was a labor of love taking the early 2000s-built catamaran and modernizing it.

The molding was shaved off the 54-foot catamaran and a bustle was added along with a wraparound windshield. Krytiuk reconfigured the cockpit to seat eight people and replaced all the gauges, as well as re-rigging the boat and new paint.

Krytiuk estimates the catamaran has more than 2,500 hours in it between the glass, mechanical and paint work. The restoration, which has taken two years, is expected to make its debut at Poker Run America’s 1000 Islands Poker Run in early August.

“The underside of the bustle of Airborne took three weeks of prep work just to work the underside that no one is ever going to see. It’s painted black and no one is going to really pay attention to that,” Krytiuk said. “But it’s something that you will see when it’s on the trailer and we expect perfection out of the shop.”

Anyone who has had a boat painted or visited a boatbuilder, can appreciate the amount of work that goes into a new paint job. Take the Airborne project, where workers started with clear coat and then sanded the boat to get rid of any hard edges from the paint. Between clear coats the airbrushing is added and the process is repeated until the final product. The Airborne catamaran required 18 gallons of clear coat, Krytiuk said.

“A lot of guys can’t fathom how much work it takes and how much perfection we expect,” he said.

Krytiuk said during the COVID shutdowns in 2021, he hired several workers (the company has 10 employees) who were laid off in the automotive industry. The potential hires were surprised they had seven days to polish a boat.

“You definitely need a different kind of employee that really understand that we’re not a shop that is worried about just pumping out 10 different car bumpers a day,” he said.

What sets Krytiuk’s paint shop apart from competitors is a climate control paint booth that can accommodate boats just under 68 feet long and 20 feet wide.

“It’s an incredible setup, I mean probably one of the best paint booths in Canada for sure but it’s up there with the sort of upper-tier guys as well,” Leibel said. “It’s a state-of-the-art paint booth and it’s massive.”

Krytiuk said some painters work outside because the boat won’t fit in the building.

“I don’t know how you can expect a good quality paint job when you’re painting outside in a dirty driveway and you’re having mosquitoes and dust and flies into your clear coat,” Krytiuk said. “You can’t expect to have the same quality paint as what we do in a fully climate-controlled booth.”

Krytiuk’s background is in construction and the cannabis industry, so art design isn’t his formal training. The shop will create basic designs for customers or for more complicated projects they have worked with Chris Mills of Boat Customs in Michigan in the past.

Krytiuk is a fan of clean and simple paint jobs, the anthesis of a typical go-fast boat. The common designs Krytiuk is currently seeing are long linear lines limited to two or three paint colors, far from the Outerlimits Powerboats paint scheme in the early 2000s.

“They had these crazy paint jobs that look phenomenal but then they’re out of style 10 years later,” he said. “I feel like a lot of the guys that are painting boats right now are doing them in a way that I think it’s still going to look great in 20 years.”

With the used boat market so strong, Krytiuk has been approached by customers looking for quick paint jobs to flip the boat and he won’t take the work. “Not all customers are willing to spend what it takes to fix it properly and whoever buys the boat is going to know that we did the repair,” he said.

A typical paint job can cost between $30,000 and $60,000 with the more extreme paint jobs running nearly $150,000. Because of the exchange rate, Krytiuk’s paint work is 25 to 35 percent cheaper than in the U.S. Of course, it requires hauling a boat into Northern Canada, but Krytiuk is looking at expanding into South Florida.

“We haul boats all over the U.S., whether it’s going down to Arizona or Florida,” he said. “We work with our clients to pick up the boats anywhere in the U.S. to make it really trouble-free.”

Expect to see Krytiuk attending local poker runs in the newly completed 54’ Airborne catamaran, which can hit speeds up to 170 mph, and in the 44’ MTI Speed Racer that consistently runs 185-plus mph.

“We’re definitely going to hit all the events in Canada that we can,” Krytiuk said. “Kingston has always been one of my favorite poker runs and when it was cancelled (because of Covid restrictions), you don’t realize how much you look forward to that weekend in August until it’s suddenly not there anymore.”