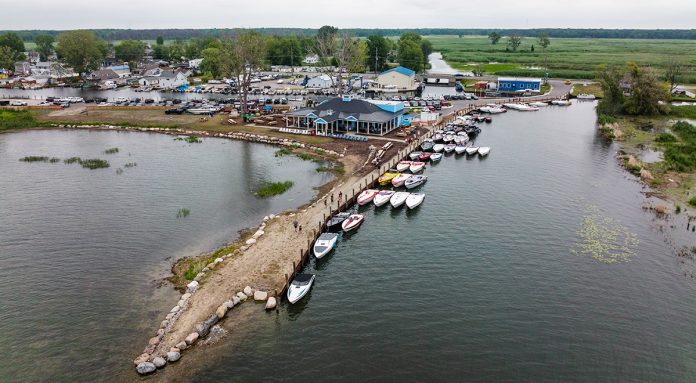 The builder held a Sun Run that attracted Sunsation owners from around the country.

When the boats spanning the Sunsation Powerboats’ 40-year history headed out on Lake St. Clair for the Sun Run, marketing director Brad DiMaggio admits it was an emotional day for the company’s employees.

“We have a lot of employees that have been here for 15-plus years,” DiMaggio said. “One of our guys, Jeff Love, who’s been here for 20 years, said he got a little emotional just watching all the boats take off for the for the run and seeing his hard work out there over the course of his 20 years here at the company. I mean, it was emotional for everybody.”

Sunsation Powerboats, founded by Wayne Schaldenbrand in 1982 and quickly joined by his brothers Joe and John, started out building high-performance boats and transitioned about a decade ago to manufacturing performance center consoles.

The early August event reflected the diversity of models that Sunsation has built from the 16-footer when the company first started to its new 40 CCX Center Console. About 75 Sunsation owners attended the Fun Run that kicked off with a midweek barbecue at the Sunsation facility with dozens of customer boats on display.

“Wayne Schaldenbrand brought five of his own boats that were the little 16-footers that they started with, and he even brought a kneeboard where he learned how to do lamination,” DiMaggio said.

Sunsation owners from as far away Florida, Georgia and New York made the trek to Algonac, Mich., for the anniversary celebration. As typical for summer in the Midwest, they had to chase rain that started a couple hours into the barbecue and into the next morning for the Sun Run.

Weather didn’t stop the Sunsation owners from participating in the run. The company’s 45 employees were given a paid day off and rode with the boat owners.

The run started on Lake St. Clair started at Cabana Blue in Clay Township, Mich., a restaurant on a 4-acre island.

“We pretty much took that over and it was the first time they closed to the public in the one year they’ve been open,” DiMaggio said.

From the restaurant, the run went north to Metro Park, which is about 16 miles from Detroit. The boats did a parade lap through the canals and then split up with some boats going to Detroit to do a photo shoot with the city skyline, while the remaining boats went across the lake to Brown’s Bar on Harsens Land. Afterward, the boats met up at Muchies Bay before closing it down at sunset.

The following day about 25 owners went on a shorter run and Sunsation Powerboats hosted a lunch. A few of the owners then left to attend the Great Lakes Grand Prix in Michigan City, Ind. A week before the Sun Run, Offshore Powerboat Association was racing in St. Clair, Mich.

“it was nice to be able to piggyback that for people coming from out of state,” he said.

The event was so successful, Sunsation won’t wait to for its 45th anniversary. DiMaggio said they are looking at making the Sun Run a yearly event to celebrate the brand.

“We’ve already gotten some commitments from a couple of venues around here,” DiMaggio said. “We’re just trying to get a pulse if everyone would want to do it again. We’re hoping to make this an annual event.”