Read our article from last year’s event below as a sneak peek of what’s to come this year!

Register today!  You don’t want to miss out on this sure to be a historic weekend.

A RETURN TO PROMINENCE

For the past 30 years, the Kingston 1000 Islands Poker Run has been the premier stop on the Poker Runs America schedule and in 2016, the event returned to its flagship prominence on a weekend that also saw the popular Canadian band, The Tragically Hip, play its last performance in Kingston, Ontario, the city that hosted the poker run.
The Kingston 1000 Islands Poker Run is one of the original high-performance boat poker runs and has a long history of being a popular event. To make the run available to more participants, Poker Runs America and the City of Kingston were finally able to change the 2016 date to the weekend of August 19-21. The number of entries increased to nearly 90 performance boats, with a large contingent from the northern  states. 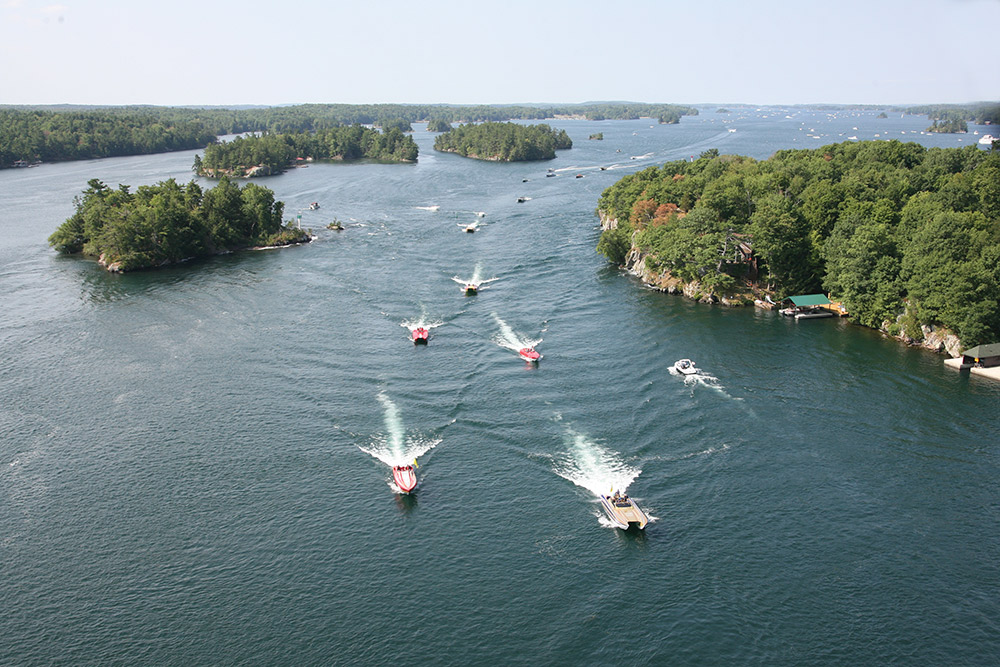 The fleet was made up of some well-known boats and names. Local favorite Bill Tomlinson had his turbine-powered 52’ Mystic, My Way, running at the front. Chris Walker made the trip from Evans, Ga., with his Mystic C4400 catamaran, Agent Provocateur, which is powered by twin Mercury Racing 1100 SCi engines and won the weekend award for Best Graphics. Walker also builds custom trucks at his company Extreme Supertruck and tows the boat with a matched vehicle. Another local  in the performance boating community, Cole Leibel brought his Skater 388, Dirty Duck, that’s powered by Mercury Racing 1350s. A DCB catamaran with a pair of 1350s was also running at the front of the pack. It was great to see Double R Performance’s Raymond and Peter Roberts and Ed Poirier at the helm of their Nor-Tech.

From a manufacturer’s standpoint, however, no company made a bigger showing than Outerlimits Offshore Powerboats. Vinnie Diorio of Wisconsin took delivery of his new Outerlimits SV43, Cazzo Veloce, also powered by twin Mercury Racing 1350s with M8 drives at the 1000 Islands Poker Run. Not only was the boat an instant hit with fans at the docks, it won the Best Engine Compartment for the weekend. Canadian Chris Mastronardi brought his stunning new SV50, also powered by twin 1350s with M8s. Dave Scotto and Team Gotta Go certainly put on a show with their Outerlimits SL50 that’s powered by Mercury Racing’s 1350/1550 hybrid engines. The team also won the Best Crew award for the weekend.

Outerlimits owner Joe Sgro had an empty seat in his enclosed 43-footer that was powered by twin Mercury Racing 1350s and I had the chance to ride shotgun with him. All told there were at least 10 Outerlimits running in the event. “I’ve never seen so many Outerlimits in one spot and it’s all nice ones, not any old boats,” said Diorio.

While the big boats always steal the show, the presence of a number of entries less than 35’ long was a definite shot

in the arm for performance boating as a whole. There were a number of Baja boats, some smaller Fountains and two single-engine Activators, plus a 29’ Warlock. Also from the West Coast was an Eliminator Daytona and even a new Advantage 34’ Party Cat, Nothing Mathers. PBC has long been an advocate of bringing in new participants to poker runs and was enthused by the numbers of new entries.

Additionally, local boat dealer Executive Yacht Sales brought Everglades 35’ center-console model to the run. It was powered by a pair of Seven Marine 557 outboards that give the boat all the speed it needs to perform well in a poker run. The boat had some issues at the start of the run, but was running fine the rest of the weekend.

Look for a test on it in an upcoming issue.

The host hotel for the weekend was the Delta Kingston, which is right on the waterfront in downtown Kingston Ontario and is right next to Confederation Park where Poker Runs America had the air conditioned Speed Zone Theater where folks who couldn’t get out on the water could watch the boats run on a large video screen. Given the bright sunshine and temperatures around the 90-degree mark, it was a great place to escape the heat and watch the run. The Blu Martini restaurant hosted the welcome party and a delicious steak dinner before the Saturday night card drawing.

With Fiji Water providing corporate sponsorship for the event and the whole 2016 Poker Runs America season, all the crewmembers could stay hydrated. Special thanks to all the local volunteers plus Dennis Stein, Chris Avery, Andrew Henstridge and the Kingston Yacht Club for their dedication of managing the marshall boats. The exciting start was captured by SkEye Steam.ca on the drone cameras based aboard Peter and Kathy Papousek’s Sea Ray. 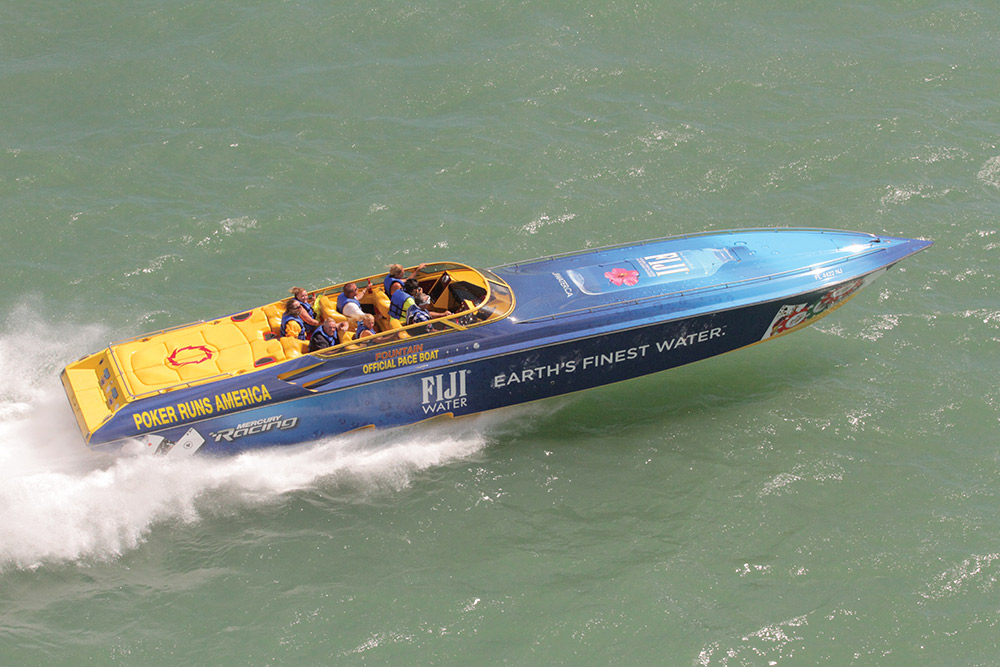 The weekend started a bit inauspiciously with a few boats heading out onto the St. Lawrence Seaway on Friday afternoon. They went on the wrong side of the channel markers and paid the price, damaging their drives and propellers.

On Saturday morning, Poker Runs America president Bill Taylor informed all captains at the drivers meeting to pay close attention to the channel markers for all the card stops. After leaving and heading South, the participants needed to keep the green buoys on their right or starboard side and the green to port. This goes against what many of us were taught, ie Red, Right Return. Red markers are to be kept on your right when heading north.

Right after the driver’s meeting, the poker runners headed down to the docks where they awaited the order to “Start Their Engines.” A poker run is not a race, but when all those engines fired up, there was definitely some adrenaline pumping.

When the boats departed Kingston at 11 a.m., they headed south to Brockville, ON, for the first card and lunch at Hardy Municipal Park. Poker run officials organized the boats by speed. Those that run faster than 100 mph had yellow number stickers and those who ran less than 100 sported a blue decal and the starts went off smoothly. The St. Lawrence seaway was full of spectator boats, but the participants all obeyed the 50-mph zone at Camelot Island, the 40-mph zone at Brockville and the slow zones around Ash Island and Rockport and there were no incidents.

Keeping in mind that a poker run is at least in part a show for spectators, after lunch, the fleet had a mandatory group start before heading south to the second card stop at Prescott Bridge. After the boats received their cards and waited for some of the slower boats to arrive at the bridge, the faster boats were allowed to leave and head back north for the fourth card at Stone and South in Gananoque. From there it was back to Kingston. The total distance was about 122 miles. The majority of the boats completed the run and the event could not be considered anything but a success. 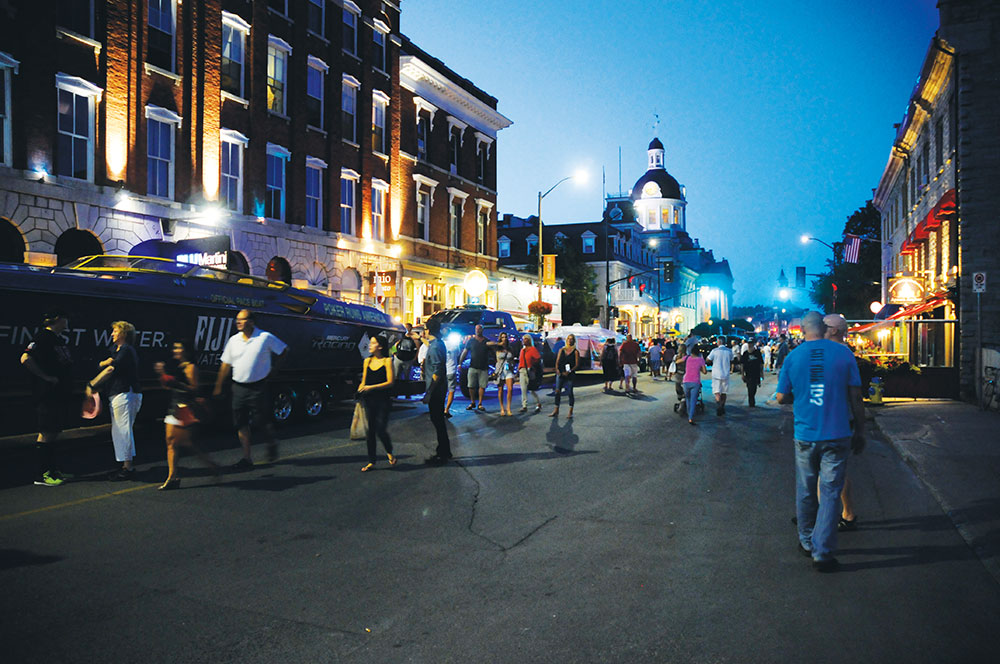 At the card draw, Max Taillefer in his 38’ Fountain, had the third best hand while second went to Ken Kleitz and his 40’ Outerlimits, Nth Degree. The big winner for the card hands at Kingston was Tony and Justine Joseph who ran their 38’ Hustler.