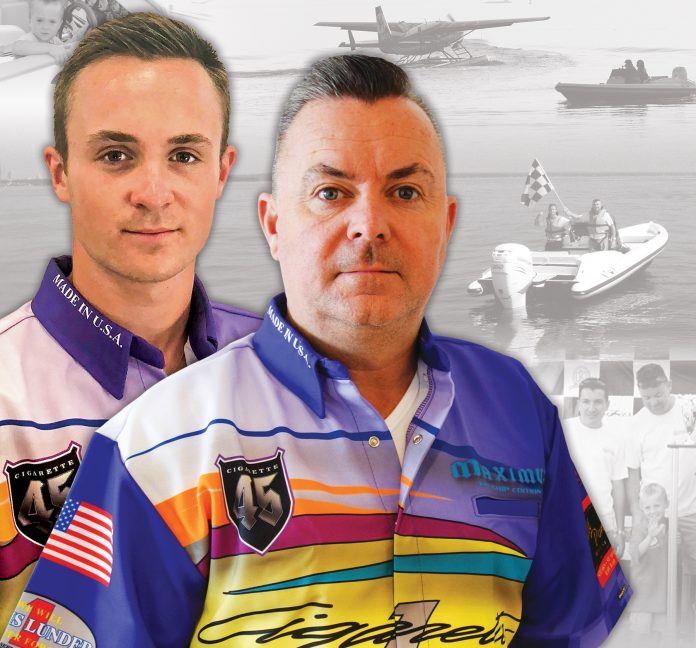 The Apple does not fall far from the tree. Boating has been a lifelong obsession for poker runner Tom and now Wesley Abraham.

When Tom Abraham was a child growing up on Long Island, he knew that boating was going to be an integral part of his life. Thirty-five boats later and more than 40 years on the water, Abraham is just as passionate about boating today as he was riding around on the family’s Chris-Craft boat as a young child.

“From the first day that we had this boat down on the south shore of Long Island in the marina, I was absolutely hooked on just the marina itself and fishing,” Abraham said. “I would go with my father like clockwork every weekend, Saturday, Sunday, whatever it was. Whether I went out on the boat, whether he was working on the boat, I would be fishing or crabbing.”

Abraham is a fixture at poker runs across the country and in recent years has been running an MTI V-42 quad with Mercury Marine engines. There is nowhere Abraham would rather be than running his center-console boat at a poker run loaded with friends and the music bumping.

Spend a few hours with Abraham and you can see his passion for boating. He bought his first boat at age 14, a 16-foot V-bottom. “We would take our friends out on the weekend and instead of going to house parties and all that, from April to October, we would bring our boats over to the town dock and hang out there at night on our boats.”

A couple years later, Abraham would convince eight friends to chip in and spend $2,000 to buy a 30-foot Chris-Craft with a pair of small-block Chevy engines. They left the boat on a mooring unattended and when a heavy rainstorm came through, the cabin cruiser took on water because the battery died and nearly sank. “We got into some trouble for that, but we got it all straightened out,” he said.

Abraham’s passion for boating can be traced to his late father, who bought a boat in the early 1970s from a family friend. With seven children in the Abraham family, the 1956 Chris-Craft was aptly named Lucky Seven.

“The comedy of going out on a Saturday with seven kids and multiple friends of my parents in a single-engine Chris-Craft,” he said. “(My Dad) trying to navigate out of a marina, literally hitting every boat on the way in and the way out.”

The Abraham family would buy a larger boat a couple of years later but eventually sold it and got out of the sport altogether. Abraham stayed with it and after graduating high school, he started a swimming pool business and then a landscaping/masonry company before launching Abraham Development Group, which builds high-end luxury homes in the Hamptons.

After having a couple of successful real estate deals in the late 1990s, Abraham wanted to buy a Cigarette and flew to Miami to chase his dream. “We all knew what a Cigarette was but nobody had one because they were very expensive,” he said.

In Miami he met up Phil Lipschutz, owner of Lip-Ship Performance, to potentially buy a Cafe Racer. Lipschutz showed him a Cafe Racer that was in pristine condition, but Abraham remembers he was turned off by the black dashboard, preferring a white dashboard.

“(Phil) had very little patience when I said I’m going to look at a couple more boats and get back to him,” Abraham said. “He had the famous quote that I still remind him on: If you don’t buy that boat, you’re not a buyer. We pulled out of there and it was amazing because an hour later … I wanted to show this guy I’m a buyer. I went back and bought the boat, wrote a check two hours later. His line got in my head.”

That would be one of many Cigarette Racing boats that Abraham would buy over the years. He bought the 38 Top Gun that was owned by retired All-Star catcher Pudge Rodriguez. From there he bought the first stepped-bottom 42 Tiger and then converted a 45 Maximus race boat into a poker run boat. His last Cigarette was a 46-footer.

“It’s amazing to this day I don’t have a tattoo on my body that says Cigarette,” Abraham said.

By 2010 Abraham said he had owned most models in the Cigarette Racing lineup and was looking to go a different direction. (Abraham still owns two small Cigarettes that he runs periodically in poker runs.) Although Abraham said he wasn’t a catamaran fan, he went on a test ride with David Woods in an MTI and was hooked. He purchased a 36 MTI with twin 700-horsepower engines.

“We’re riding down the St. Johns River (in Florida) at 140 mph and I absolutely could not believe what I was seeing, feeling or driving for that matter,” he said. “My brain was done. That was very hard to get out of a catamaran and get back into a V-bottom.”

Abraham drove the MTI but also saw a spate of catamaran crashes that had claimed the lives of boating friends he knew. The last straw for Abraham with catamarans was in 2014 when Outerlimits Powerboat founder Mike Fiore died in a crash at the Lake of the Ozarks.

“I take my kid and my friends (with me),  and we have ridden very fast many miles without any incidents,” he said. “I threw the towel in on the cats only for the reason I didn’t want to be that guy who knew better.”

Abraham sold his MTI and had Randy Scism build him a new V-42 center-console, which he still runs today. The focus for Abraham was no longer about just going fast but enjoying the ride.

“I’ve never had as much fun in a boat as this one,” Abraham said. “Not only is it an incredible boat, we’ll put 18 people on it and still ride at 70 mph everywhere we go, music blasting, everybody can walk around and having fun.”

Racing never appealed to Abraham and the only race he’s done was the Don Aronow Memorial race to Bimini. “I had enough stuff to manage with boats, friends and my son, it just didn’t fit into my program,” Abraham said.

What appealed to Abraham was trying to break the “Around Long Island Marathon” record that had been set by Stu Hayim in 1991. Abraham’s first attempt in 2010 came up short when he broke a driveshaft about 50 miles into the run. But what he learned from the attempt, he applied to a second try this past August.

Abraham’s 18-year-old son, Wesley, wanted to break the single-engine record that took nearly seven hours to complete the 275 miles around Long Island (Read to full story: https://pokerrunsamerica.com/?p=26591). Wesley convinced his father and they built a 31-foot Airship rigid inflatable for the run. The younger Abraham added two temporary 40-gallon fuel tanks so they wouldn’t have to stop during the run.

“It took months of first getting the boat done, playing with it and making sure it was good,” Wesley said. “Then we were trying to find the weather window. It literally took two months to find the right day.”

When the perfect day arrived in August, the father and son duo started at 6:30 am and had good water conditions except for a couple of stretches. Wesley drove while his father throttled and navigated their way around the island.

“I grew up here so I know the water very well,” said Abraham, who now lives in Lloyd Harbor, New York. “We literally shaved off every possible tenth of a mile I could, cutting everything as close as I possibly could but no matter what you still have to go around Long Island by water. You can only trim so much.”

They were well on their way to smashing the record when the outboard engine went into guardian mode. The code was for a boost control valve error, something neither father or son had seen before. “I thought it was over, we’re done,” Wesley said.

Slowing down the boat for a few seconds, the engine went out of guardian mode and they pushed on to finish in 3 hours, 59 minutes, besting the previous record for a single-engine boat by almost three hours. Abraham couldn’t move for a couple of days after the 272-mile record-setting run but said it was worth it to do the challenge with his son.

“It was one of the biggest days of our lives together,” Abraham said. “He actually puts me to shame of being a boat addict. He had his 100-ton captain’s license at 17 years old, he can run a yacht, he can run a fast boat, he can run a cat. He can run anything. It was a very proud day.”

While Abraham enjoyed the endurance run around Long Island, his focus remains on doing poker runs.

“It’s a cliché line but it’s so true, it’s more than the boats,” Abraham said. “It’s the people and friends that I’ve met and made over the years.”