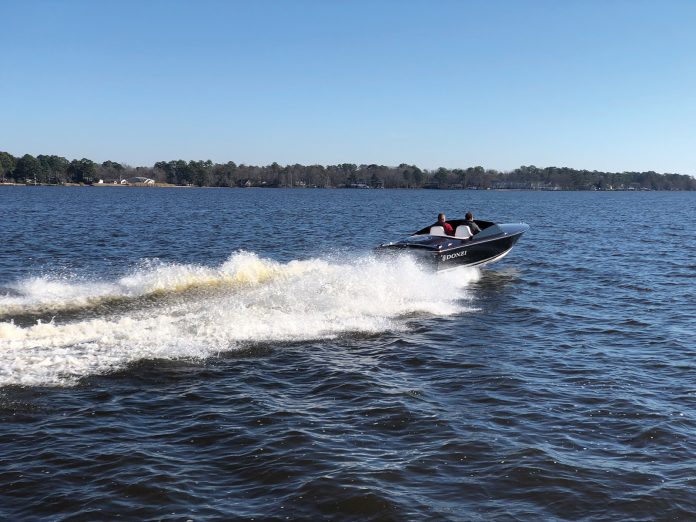 Iconic Marine brings back some top models from Fountain Powerboats and Donzi Marine.

It’s the middle of winter in Washington, North Carolina and the Iconic Marine factory is buzzing as workers are laying up hulls, producing boat interiors and rigging boats. A few winters ago the same plant was essentially idle and the future was uncertain for Fountain Powerboats, Donzi Marine and Baja Boats.

The company has come roaring back thanks to owner Fred Ross and the talented team at Iconic Marine. High-performance sport boats and center-consoles are rolling off the line as Iconic Marine works to meet pent up demand.

Iconic Marine brought marine journalists, including Poker Runs America, to North Carolina in December to showcase its revamped lineup and the high-end product the company is producing. Iconic Marine had six models available for testing including the Fountain 34’ Thunder Cat, Fountain 47’ Lightning and the sport center-console Fountain 34’ SC. The Donzi offerings included the 41 GTZ, 38 ZRC and the 22’ 55th Anniversary Classic.

“When Iconic started up 2 1/2 years ago, (late COO) Joe Curran was at the helm, he did a very good job of figuring out what we could build and what people were buying and that was center consoles, so he started with that obviously,” said Jeff Harris, Iconic Marine’s chief operating officer. “He could have easily said bring back the 42 Lightning but the marketing numbers doesn’t show that there’s a big demand for 42 Lightnings as there are center-consoles. Now that we put our product out there for center consoles and that’s established, we’re looking at other markets.”

Harris is tasked with picking models where there is a market and updating those products, many of which haven’t been updated in a decade. It’s also aligning the brands so they no longer have models competing against each other.

When Ross purchased the company one of his first moves was to bring Fountain Powerboat founder Reggie Fountain back to consult and promote the brands.

“Reggie had so much experience and knowledge and it would’ve been a waste to not bring him back to talk to him to gain some knowledge,” Ross said. “He knew the guys, you know the heavy lifters, that could get things done.

“I wanted to wrap my mind around both sides because I’m a truck and crane guy but I like to understand and there wasn’t anybody better to teach me why and how we did things. I’m not an expert yet but I’m working on my way to be more knowledgeable every day.”

Though Reggie Fountain is no longer putting in 12-hour-plus days, seven days a week, his influence is still felt at the plant.

“I enjoy working for (Fred Ross), he’s a good man and he’s got a big vision,” Fountain said. “He wants to take the company as far as he can, so I’m going to try to help as best I can.”

The high-performance market is fundamentally different when Fountain left the company in 2010 and one of the main reasons Iconic Marine has been conservative in reviving certain models. The market simply isn’t large enough to invest the millions of dollars in new tooling along with research and design.

The hulls on the six models have already been refined, so the models needed new interiors and deck improvements. It’s still expensive but far cheaper than to design a boat from scratch. Iconic Marine spared no expense in updating the interiors, replacing windshields and updating the decks. (Look for video reviews at www.pokerrunsamerica.com).