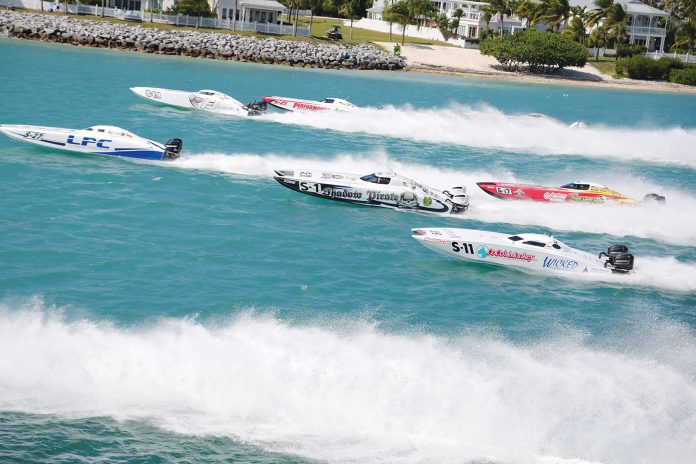 The Key West Championships go in a different direction

There are few boat races that draw fans from all over the world like the Key West Championships. Featuring the top racing and pleasure boats in the world, the week-long party is one of the biggest powerboating events on the planet.

When Race World Offshore came in to run the offshore championships, the great unknown was what the group had planned for the race other than to bring the glory back. Race teams went to Florida’s Key West with cautious optimism and the 39th running of the race didn’t disappoint.

The championships featured a spectacular crash when Team Allen Lawn Care and Landscaping and Team LPC flipped simultaneously during the first day of racing, drawing international media attention to the race. Beyond the headlines, 29 race teams entertained the crowds during the three days of racing.

Local promoter Race World Offshore won the rights last year from the City of Key West to stage the early November race. The city put the race up for bid after the contract with Super Boat International expired following the 2018 World Championships. SBI protested but the City of Key West, which controls the Truman Annex where the races are staged, stuck by its decision.

The United States Coast Guard didn’t issue a permit to stage the race until late September, creating some uncertainty for Race World Offshore President Larry Bleil and his team.

“For a first-year event, us coming out of the box with the changes that we did, it was great. I couldn’t ask for anything better,” Bleil said. “All we can do now is go up. When you get companies out there seeing events like this, they’re going to get involved, they’re going to spend money, hopefully bring on sponsors and help the race teams. Doing the local thing, as it has been going on for years and years, hasn’t worked. By bringing the class up, bringing everything up, it’s going to help the industry. That’s what I’m trying to do.”

Race World Offshore wanted to make the event more spectator friendly and to get greater community involvement. Bleil upgraded the VIP experience on the Outer Mole for offshore racing fans and held a build-a-boat contest to get locals involved. The contest was a roaring success with race teams and even Coast Guard members participating.

Bleil also collaborated with the Florida Powerboat Club, which brought a record 260 poker run boats to Key West for its 27th annual run. In past years, offshore promotors viewed the poker run as competition rather than complementary. During a break in the races on Friday—teams raced Wednesday, Friday and Sunday—the poker runners did a flag parade in the harbor. About 50 poker runners displayed their state or country flag for the race fans.

“It’s a long time coming because I think there is some synergy we’re able to explore even if it was just baby steps for the first time,” said Stu Jones, president of the Florida Powerboat Club.

Jones said the run to the Keys in November has become a bucket list poker run for attendees, especially when the boating season has ended in much of the country. The poker run and offshore races fits naturally, Jones said.

“A car club makes sense that they would organize a group to go to a big car race, likewise we’re just a boat club that wants to go watch boat racing,” Jones said. “It’s a nice backdrop, so I think that’s where the synergies come together so nicely.”

Bleil recognizes the club brings lots of fans to Key West, who stay in hotels and spend money at the local bars and restaurants.

“The poker run guys, as you know, is a big part of the industry,” Bleil said. “It’s huge and to have them involved, seeing the boats you guys are running around with and out there racing.”

The double flip of Wright Performance catamarans in the Super Stock race had fans talking in the bars on Duval Street. Allen and Larry Pinegar of Team Allen Lawn Care and Landscaping, and Mike Wright and Loren Peters of Team LPC were not seriously injured in the crash in the first race. After the crash, the 10-boat Super Stock field was reduced to eight.

CR Racing was in command all week, winning all three Super Stock races. The team was challenged by FJ Propeller, Performance Boat Center and Shadow Pirate but CR Racing proved to be too much for the field.

“We made some last-minute setup changes on the boat based on what the water was doing and it worked perfectly, and we got out there and we didn’t come off the line first but we ended up picking everybody off and then working our way to the top,” said CR Racing throttleman Casey Boaz.

“It was definitely a set up thing. Everything down there in Key West is set up because the water pretty much changes on an hourly basis. Man, you could have three different set ups just on one day second-guessing yourself, what’s going to work and what’s not going to work.”

In the eight-boat Supercat field, it was WHM Motorsports’ Billy Mauff and Jay Muller in their usual spot atop the podium. Running their familiar yellow 40-foot Skater, WHM won the first race and third place the next two races, but it was enough to earn a championship.

The Pro Floors Racing team of Grant Bruggemann and Wayne Valder would likely have a championship if it wasn’t for exiting race one early because of an ignition problem after being hosed down. Just three points separated WHM Motorsports and Pro Floors Racing.

The three-boat Extreme class quickly became a one-team race with Team CRC grabbing the championship. Team CRC’s Mike DeFrees and Jeff Harris were dominant in the opening race and in the next two races, neither of their competitors Team Freedom or HUSKI Chocolate Racing Squad were able to start or finish.

With the improvements to Truman Annex, including a new amphitheater in nearby Truman Waterfront Park, there isn’t as much room for race pits.
“Honestly, I don’t have room for a whole lot more boats here in Key West with the new layout of the park,” Bleil said. “I couldn’t put 70 boats down there if my life depended on it.”