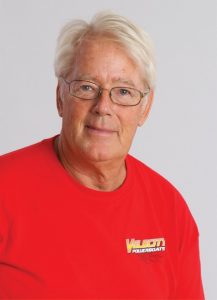 Poker Runner Ed Nichols has a lot to be excited about. His new 2013 390 SS Velocity made its debut appearance at the Poker Runs America Tampa/Sarasota Season Finale Poker Run in October and he is looking forward to a season of boating on the beautiful Gulf Coast.

Achieving an impressive speed of 92.5 mph right out of the gate, Velocity’s Steve Stepp pushed the envelope to squeeze an additional 8.5 mph to hit 100+ mph. The 390, powered by a set of staggered Mercury 565 Sterndrive engines with XR drives, spins a set of Mercury 5-blade Maximus 34-inch pitch props.
Reaching the century-mark isn’t exactly ground breaking news in the world of offshore performance boating – but Nichols, who stepped up from a 36 Velocity, isn’t out to claim fame. At 69, the retired mechanical engineer of 30-plus years just wants to have fun and keep up with the pack at poker runs with more modest power. 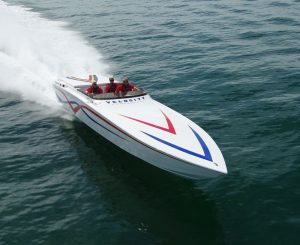 Rationalizing the three extra feet came down to a decision to match the demands of Chesapeake Bay and the Florida Gulf Coast where Nichols does his boating. Other factors included wanting a lighter model with efficient fuel consumption and a faster top end. Nichols also wanted more space in the cockpit and cabin, plus an ergonomically-designed helm. Unlike many boat buyers, Nichols was instrumental in the specs for the cockpit, cabin and engine room.
“After a having a 36, you get a little opinionated,” laughs Nichols, “I wanted more cockpit space than the 36 and more room than the standard 390 offered. I was in the factory with Velocity quite a bit during production. We did a lot squeezing and moving. We moved the dash and bulkheads forward by about six inches and fought for inches here and there. It was also built lighter as we wanted more speed and better fuel consumption.”

Nichols explains that Stepp and Velocity were great to work with and understood exactly what he wanted. When it come weight savings, Stepp replaced the standard refrigerator (among other concepts) with a built-in cooler and while the cabin was kept to a bare minimum to conserve pounds, comfort wasn’t compromised with a forward berth, face-to-face seating and a sink.

As a “hands-on” person who conducts his own engine maintenance, Nichols was very particular about the engine compartment, requesting the twin 565 Sterndrive engines be staggered for easier engine access, while the forward pumps and sea strainers were relocated for easier maintenance.

“If I am in an inlet and the strainers get plugged, I don’t want to stand on my head to fix it. There was a lot of that type of work in my previous boat. I also wanted staggered engines. It rides better, balances great and I can maintain the engines easier. With the 36, I had about three inches of working room. So I said ‘take three inches out of the fuel tank (which is equivalent to two or three gallons)’ and now I can maintain things easier. But everything on the boat was made to make the 390 light. The result is a model that is very nimble and rides really nice.” 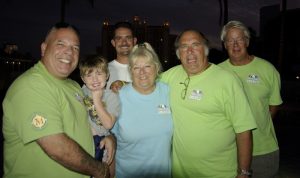 Being particular about all things mechanical is something Nichols says he was born with. Nichols’ father was an engineer, as was his grandfather. He was raised in Ridgewood, NJ, approximately 20 miles northwest of New York City. He became interested in working with his hands at a young age – particularly during the summer months when his family would spend the season on Peach Lake in Salem, NY, where he developed an interest in boating.

His first boat, an eight-foot Pram, was powered by a 7.5 hp Evinrude. When he was a little older, he built his own boat, a nine-foot hydroplane, followed by two 12-foot class utility racing hulls. Salem Lake was where he learned to waterski, a sport Nichols excels in to this day, with several regional and national American Waterski Association titles to his credit.

Following high school, it was only natural for Nichols to follow in his father’s and grandfather’s footsteps in the engineering field. He graduated from Clarkson University in Potsdam, NY., with a degree in mechanical engineering. Soon after, he met his wife, Sharon. They had two children together; Donald, now 39, who lives not far from Nichols in Townsend, DE, and Brenda, now 42, who lives in Winter Garden, FL., located just outside of Orlando. It was around this time when he also became serious about waterskiing, entering his first tournament in his late 20s in 1972.

In 1977, tragedy struck when Sharon suffered from a sudden aneurysm, passing away instantly while Nichols was traveling on business in Europe. Left alone to raise two children, Nichols had a position with DuPont in Newark, DE, in the design division, overseeing the development of new plants and facilities. He raised his children in Newark, DE, before moving in 2000 to Townsend, DE, his current residence.

“DuPont ran the nuclear plant in Savannah River and for a while I was doing atomic energy work. But when you are alone raising two children, you have to go where the good salary is. I was with DuPont for 30-plus years.” 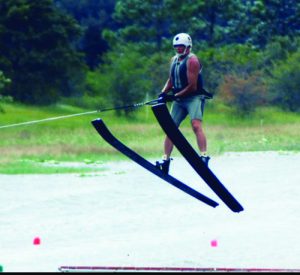 While raising his children, Nichols and his family were never too far from the water. He continued his interest in waterskiing with Donald and Brenda, with their first tow boat – a Ski Supreme.

“The nice thing about waterskiing is you can enjoy it with the whole family,” says Nichols. “I would come home from work, pick up the kids and we would go skiing on Chesapeake Bay. Waterskiing has been fantastic for our family.”

In fact, Nichols interest in waterskiing lead him to earn several titles over the years. He has been officially invited to officiate in 18 American Waterski Association championships. One accomplishment he is extremely proud of is earning the American Water Ski Association’s 2009 – 2010 National Jump Championship for his age group in the Mens 7. In addition to competing in the men’s Jumping, Nichols competes in Men’s Slalom and Trick Skiing and was undefeated in 2010 in Jumping, ending the season at the top of the national standings list. 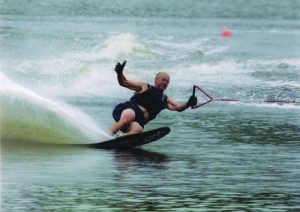 “In 2010, our family did something that hadn’t been done on the circuit. We had three generations win gold medals in the American Waterski Association the same year. I won jumping and second overall while daughter Brenda won Slalom and Jump, and Overall Woman’s Three. Brenda’s husband, Mike Baldwin also won in men’s Tricks while grand daughters, Brooke and Kristen, finished One-Two in Slalom/Trick and overall in Girl’s One.” In fact, Brooke is currently ranked number six in the World’s standing list for the Under 18 class. She tricked at the 53rd Masters Water Ski and Wakeboard Tournament May, 2012.

“Brooke, just tricked in the Masters this year. To ski Juniors in the Masters you have to be in the top six in the World’s standing list in the under 18-age bracket. She is number six.”

Now retired, Nichols divides his time between his second residence near Leesburg, FL, and his rural home in Townsend, DE, which is in a fly-in community where he keeps two airplanes that he built himself. After taking up flying in the mid-1990s, Nichols’ once again took matters into his own hands and built an 80 hp, 80 mph (cruise), amphibious seaplane. While Nichols enjoyed the fruits of his labor, after a few runs to Florida he realized that cars on the road were passing him. So, he opted for something with a little more speed. The result was a four-seat, composite/fiberglass plane capable of speeds of 180 mph (cruise).

“Since I live in a fly-in community, I can make the trip to Florida from my backyard in about five hours,” says Nichols. “The fiberglass kit planes are some of the strongest planes in the air.” 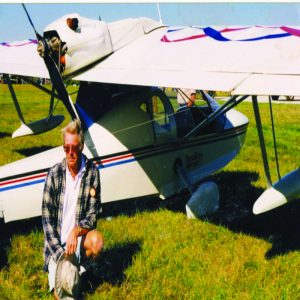 Following the purchase of his boat this year, Nichols is happy with his choice of the 390 Velocity and anticipates doing some runs in 2013. In fact, he explained that of the dozen or so poker runs he has attended, the PRA Cape Coral Season Opener Poker Run ranks as his favorite.

“I have done the PRA Miami Poker Run a few times and just recently did the Tampa/Sarasota Season Finale Poker Run. But I love the Cape Coral run,” said Nichols. “The facility (The Resort at MarinaVillage) and the area where we go on the water are just gorgeous. Plus, it’s not too far from where I live.”
In the summer, Nichols splits his time between waterskiing behind his CorrectCraft with his family and cruising in his Velocity on Chesapeake Bay.

“In the summer I usually bring the Velocity home and take it on Chesapeake Bay. It’s great cruising and that area is gorgeous as well. I enjoy areas including the Bohemia River and Locust Point.”

The 2013 season will certainly be an enjoyable one for Nichols. With a new boat, hefty power, and the interior design and speed just the way he wants it, he definitely has a reason to be excited.