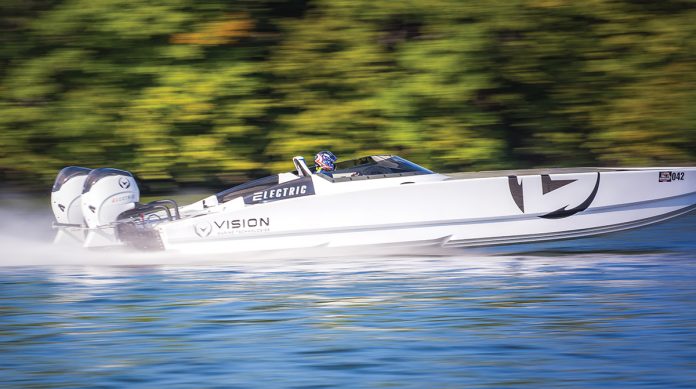 The fastest boat at the Lake of the Ozarks Shootout will always grab the headlines but electric outboard motor manufacturer Vision Marine pulled off a record-setting attempt.

A 32-foot catamaran with twin E-Motion motors and powertrain system ran 109 mph, the first for an electric boat. It’s a major advancement in electric boat technology and the Shootout fans knew it as the catamaran ran the 3/4-mile course.

“We’re always years ahead in working and developing our technology,” said Alexandre Mongeon, Vision Marine’s co-founder and CEO. “That’s why we’re the top leaders in the electric industry. We won’t stop and I think people will be amazed with the future.”

To make the record run a reality, Vision Marine recruited racer Shaun Torrente to dial in the catamaran and run it during the Lake of the Ozarks Shootout in late August. Weismann Marine developed the transmission for the boat.

The catamaran needed batteries that could deliver maximum power for 3 or 4 minutes nonstop, Mongeon said. The battery pack is the same it sells to consumers but was optimized for high output. Vision Marine recognized it had to create strong torque to quickly get on plane.

Torrente spent a few weeks testing the catamaran in Florida and knew it would easily break 100 mph, a remarkable speed for any boat.

“I like doing cool stuff and when Alex (Mongeon) originally called me, I didn’t believe him and told him it was going to be difficult,” Torrente said. “He sold me on his vision, pardon the pun. It wasn’t easy but nothing worth doing is easy.”

Mongeon announced in May plans to set the record again at Lake of the Ozarks Shootout, the largest unsanctioned race in the country. With more than 100,000 people attending the week-long event on the Missouri Lake, the Shootout was the perfect place to showcase the electric boat technology.

Last year Vision Marine won Top Gun for its class and set the speed record for an electric boat. Running a Bruce 22 boat with a single E-Motion 180E electric outboard and powertrain system, the V-bottom had a top speed of 49 mph. The boat broke the company’s previous record of 31 mph set at the 2019 Shootout.

“We won our class, but the Bruce 22 is a runabout,” said Vincent Prevost of Vision Marine.

To break the 100-mph mark, Vision Marine selected a 32’ Hellkat Super Sport Widebody catamaran. In addition to hanging a pair of the E-Motion 180E outboards on the transom, Vision Marine had put the battery packs—which weighs 400 pounds—in the gunwales.

To facilitate the record run, Vision Marine rented a house near the start line by Captain Ron’s Bar & Grill. The catamaran was towed to the start box, similar to the gas-powered catamarans but is capable of doing multiple 3/4 mile runs on one charge. The outboards were charged using a 220-volt charging outlet that is typically found in most marinas.

“When the boat isn’t set up for a top speed run, the powertrain technology is designed for 50 nautical miles of driving range. Most boaters generally do under 10 miles a day,” Prevost said.

The setup at Lake of the Ozarks was to showcase the possibilities for the zero emissions and noiseless technology. Vision Marine, a publicly traded company, hopes to own a large slice of the electric boat market that is expected to generate $16.6 billion in revenues by 2031. The company recently signed a deal with Groupe Beneteau to offer its electric outboards.

“We like to educate people about the possibility of racing with electric boats,” Prevost said. “This (type of) power and racing is kind of new to the boating world and this was a great outlet to showcase it.”

Adds Mongeon,”I’m delivering what I told everyone I would do and I’m not done.”