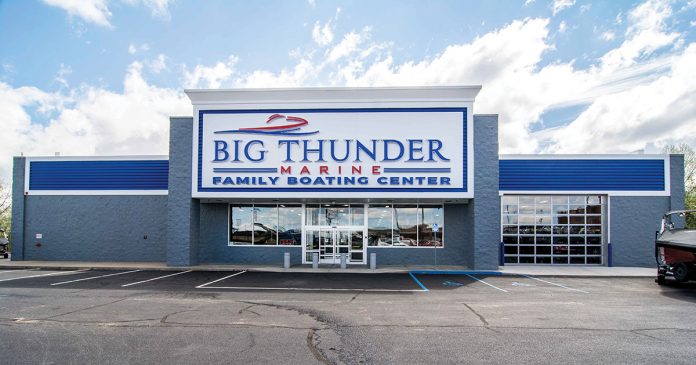 Big Thunder Marine continues to grow in Lake of the Ozarks and beyond.

Lake of the Ozarks is the center of the high-performance boating universe and Big Thunder Marine is a big reason why the Missouri lake is so popular with the go-fast crowd.

The marine dealership based in Osage Beach., Mo., helped put the lake on the map as one of the world’s largest high-performance dealerships. As the lake’s popularity has grown, the dealership has reinvented itself as more than a place to buy or sell a boat and get service.

Credit Fred Ross and his children, Chris and Andrea, who purchased Big Thunder Marine in 2015. They have transformed the dealership, which has added locations in Lake of the Ozarks and expanded into Florida.

“It’s not all about the lake and bikinis, it’s a family orientated business,” said Jason Hill, who has bought several boats from Big Thunder Marine over the past 10 years. “They’ve gone from the Flintstone ages to the modern today. That is how much they’ve changed the boating world down there.”

Running a dealership, especially one catering to high-end buyers, is demanding work but the team the Ross family has put in place has met the challenge, Hill said.

“There’s just nobody better than those guys,” said Hill, who lives in Kansas City. “They take care of us. I call down, their service is good, parts is good. When I buy a boat from them, it’s an over-the-top experience.”

The Ross family came in at the right time to save Big Thunder Marine before it went to the auction block in 2015. The dealership’s founder Bob Morgan died in an offshore racing accident at the World Championships in Key West., Fla., in 2011 and his widow Sue Morgan was selling assets including the dealership.

Acquiring the Big Thunder Marine dealership led Ross to purchasing the Baja, Donzi Marine and Fountain Powerboats brands to form Iconic Marine Group. Ross had gone to visit the boatbuilder in Washington, N.C., about becoming a dealer and saw an opportunity. 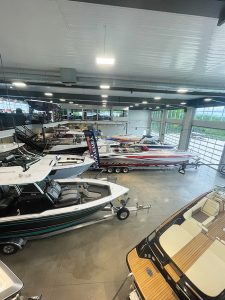 Ross founded Custom Truck One Source, a company that generates over $1 billion in yearly revenues, and has always been strategic in his acquisitions. By having a flagship dealership in the Lake of the Ozarks, it gave Iconic Marine an avenue to sell its boats while rebuilding its dealer network.

Big Thunder Marine represents 11 boat brands beyond the Iconic Marine brands such as Blackfin, Chris-Craft, MasterCraft and Statement Marine. Big Thunder became the exclusive dealer in Lake of the Ozarks and Palm Beach Gardens, Fla., for Cigarette Racing in March. While Cigarette Racing and Fountain Powerboats were at one time rivals, Fountain has been busy building center-console models.

Cigarette Racing had reached out to Big Thunder Marine about representing the Opa-locka, Fla., builder.

“(We’re) always open to opportunities and we had a number of conversations and meetings at Fort Lauderdale and Miami boat shows and were able to put something together that is mutually beneficial for customers, Big Thunder, and Cigarette,” said Jeremy Anderson, Big Thunder’s general manager. “We’re excited to represent such a great product at LOTO and in Palm Beach.”

New and used boat sales are one aspect of Big Thunder Marine, which strives to be the go-to boat shop in Lake of the Ozarks. The marine dealership has a large service and parts department, as well as a growing boat rental fleet.

The Ross family has been busy expanding the Big Thunder brand by quietly buying up older marinas around Lake of the Ozarks. In the past two years, Big Thunder has acquired Lake Port Marina and the Ozark Yacht Club to join Glencove Marina the family purchased in 2016.

The Ozark Yacht Club acquisition, completed in late 2021, includes six executive rental homes that can sleep up to 97 guests. The property also includes the Lakeside Café and Anchor Room Banquet Center, as well as 110 wet slips, a fuel dock and rentals.

Big Thunder has close to 100 employees with summer seasonal help and its Florida location. “We’ve grown quite a bit from just eight employees when I started in 2016,” Anderson said.

“I won’t go into what our strategies are other than we’ll evaluate any opportunities that come our way,” Ross said.

In addition to rebranding each of the properties, the Ross family has invested significantly to upgrade the marinas and facilities. Customers such as Hill have taken notice, especially at the Speed & Luxury Showroom on Bagnell Dam Boulevard in Lake Ozark.

“Their showroom is better than most car dealerships in the United States,” Hill said. “It has hardwood floors. It’s inviting and warm.”

Anderson said their goal is to be a one-stop marine store on Lake of the Ozarks, appealing to entry-level and high-end boaters alike. Whether a customer needs a new lifejacket or to get the boat serviced, Big Thunder Marine wants to be at the top of the list.

“We’ve definitely stepped up our game to meet the high expectation levels of our clients,” Anderson said. “For most of our clients, boating with their families is their favorite thing to do away from work.

“They expect their boats to run and operate at all times, and when they don’t, we need to react quickly. Some of these boaters are only down four or five times per year and if their boat is down even once that can be 25 percent of their season. We understand this and have built our service department around our customers’ expectations.

Big Thunder Marine stages events throughout the year on the lake for its customer. One of the favorites is the BFD Fun Run, open to owners of Baja, Fountain and Donzi boats. This year 85 boats were registered for the event, which started five years ago and brings tourists to town that support the local restaurants and hotels. It also helps promote the Iconic Marine brands.

“It’s a great way for our sales staff to reconnect with their customers and a way for our other salesmen to meet potential new customers that might be looking for a boat,” said Camryn Brumley, marketing coordinator for Big Thunder Marine.

Big Thunder is active off the water supporting charities around the lake.

“People will never see the full scope of how we are involved as some of it is behind the scenes,” Anderson said. “We support the schools, charities, and have helped people out of bad situations. I think we are a pillar in the community and one of the best places to work at the lake.”

It’s been 11 years since the passing of Bob Morgan and Anderson was asked what Morgan would think about the Big Thunder dealership today.

“I think Bob can appreciate the growth of Big Thunder and how the brand survived and thrived even after his passing,” Anderson said. “It shows how well he built the brand.”