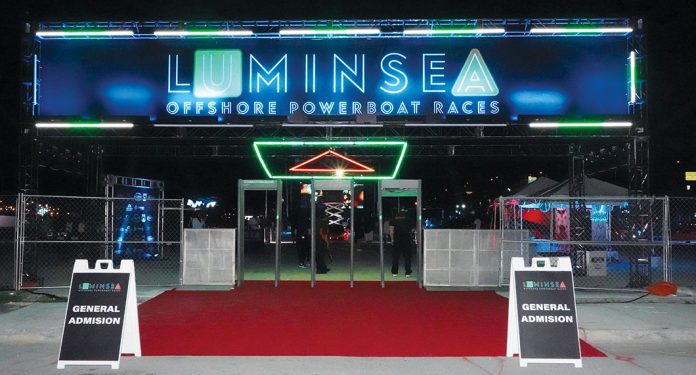 Formula One and the LuminSea Powerboat Races deliver the speed on land and water.

Organizers of the LuminSea Powerboat Races during Miami’s Formula 1 weekend plan to return next year after a combination of on-water and weather delays led to the exhibition race being canceled.

It was an ambitious effort to stage the race off South Beach to capitalize on the fans and celebrities in town for the inaugural Formula 1 Miami Grand Prix. Organizers had just four months to obtain permits, find a sanctioning body and build the infrastructure for the one-day exhibition.

Organizers planned to showcase racing on the course with illuminated red and green markers manufactured by LuminSea, a company owned by Miami attorney John H. Ruiz. Ruiz purchased Cigarette Racing Team in 2021 with plans to get the iconic brand back into offshore racing. The offshore race was a perfect opportunity to showcase both brands before an international audience.

Delays including sea turtles on the 8-mile course and a dislodged buoy pushed the start of the races from early morning into the afternoon. Fans got to see an exhibition run with Cigarette Racing Team boats but before the races for Stock V, Super Cat, Class 1 and production classes started, the Coast Guard called it off because of a small craft advisory.

Ruiz was happy with the overall event and bringing offshore racing back to South Beach after a decade.

“It was a lot of work to get all the permits in place, get all the buoys, set everything up and get all the racers,” Ruiz said. “It worked out really well and I think people were really happy. They had a great experience in terms of the way that we configured (the course), which is way different than most people do. I think we’ve got a great thing going.”

“We tried to make the races kind of like a lifestyle,” Ruiz said

The course was laid out with 24 buoys (12 red and 12 green) and illuminated channels markers for the course just off the famed South Beach.

“Many times you see these boats racing out there and you really don’t know what the course looks like,” Ruiz said. “From a set up perspective, it looks really good. The racers know what they’re doing, the fans know exactly what’s going on.”

This year’s race was run without a sanctioning body and Ruiz said it was too early to see if the 2023 Miami offshore race would operate under an American Power Boat Association/Union Internationale Motonautique banner.

Ruiz said the LuminSea Races will be back as part of the Formula 1 races in 2023. The Miami Grand Prix was a huge success with Red Bull’s Max Verstappen winning the inaugural race. Racers crowned the Formula One race—only one of two in the United States—an instant classic.

Ruiz said the offshore races might move to the Thursday before the Miami Grand Prix next year. The goal is for fans to watch offshore racing in the morning and then head to the track to watch the Formula One testing.

“What we were planning all along was we would start early because most people go out to the track on Saturday around 3 or 4 o’clock,” Ruiz said. “We want to get people out to the boat races and then transport them over to the car races. It should be fantastic.”