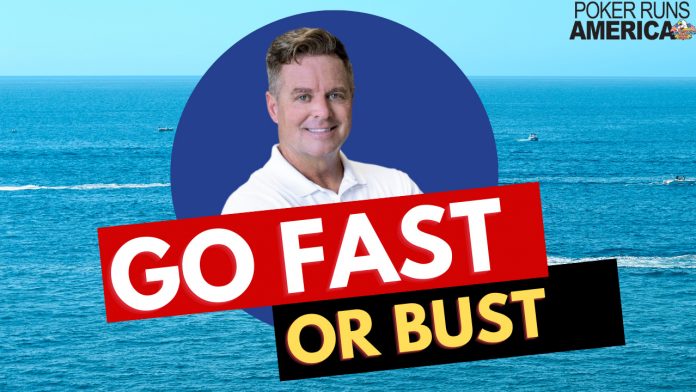 Spend a few hours with Velocity Powerboats’ Scott McCormick and it’s like attending a Sunday revival. McCormick is relentlessly optimistic, and his positive energy is infectious even for the most jaded boat buyer.

McCormick has been loving life since purchasing Velocity Powerboats four years ago and taking the Sanford, Fla., company to new heights.

“You’ve just got to be positive, and you’ve got to visualize success,” McCormick said. “You’ve got to have a dream and stay on that path. If you keep believing and stay focused, you just blink your eyes and your dreams come true.”It’s this philosophy that has helped the 52-year-old McCormick find success in and outside the marine industry. Reviving the Velocity Powerboats brand, which was founded in 1978, has been McCormick’s biggest challenge yet after he bought the company’s assets in 2018 and restarted production the following year. 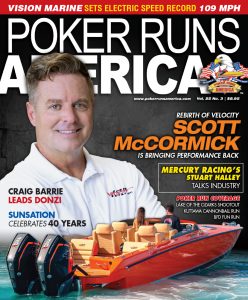 Few people know Velocity Powerboats as well as McCormick, who started at the company as a teenager sweeping the factory floor because he wanted to be around high-performance boats. McCormick knew that Velocity still had a large following and while the go-fast buyers moved onto center consoles and outboards, he still feels there is a market for performance sport boats.

If the year-long backlog Velocity has built up is any indication, McCormick may have spotted the trend before the rest of the industry.

“What set alarms off in my head was when I started seeing the used performance-boat market pricing going higher and higher,” McCormick said. “It started getting to a point where I’m like, ‘Man, I remember I sold that boat brand new for $100,000 about 20 years ago and they’re literally asking $85,000 for it now. That told me the supply and demand was inverted.

“I felt the center-console outboard market was so saturated and the wrong direction for Velocity. I said, ‘We are going to bring these performance boats back, and people are going to want them.’” 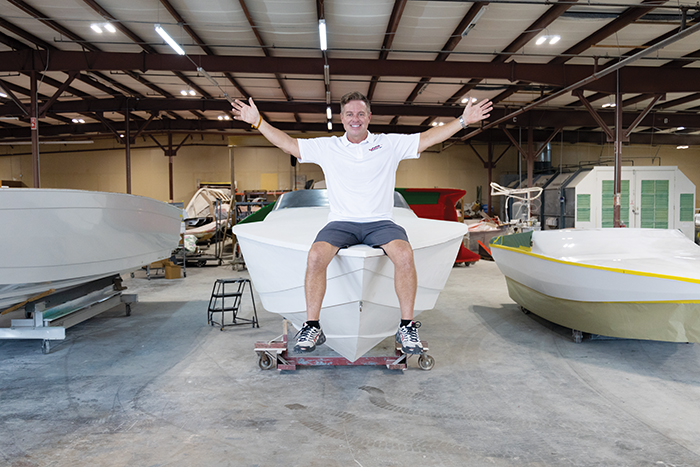 McCormick wishes it was as simple as finding an industrial building, dusting off the old molds and restarting production. When McCormick purchased the assets, the molds had sat in a dusty Tampa, Fla., warehouse for three years.

“We were a total startup,” he said. “We had no documentation, no bill of materials, no build sheets. I mean there was nothing.”

McCormick invested in having the molds scanned and a certified lamination schedule was developed for the V-bottom offerings from 22 to 43 feet. Velocity created inserts for the mold to offer outboard or sterndrive versions of its models.

McCormick also upgraded the vinyl in the cockpit and cabin and stepped up the electronics and hardware for the new generation of models. The investment was in the millions of dollars, but it was critical for McCormick to get it right from the start. 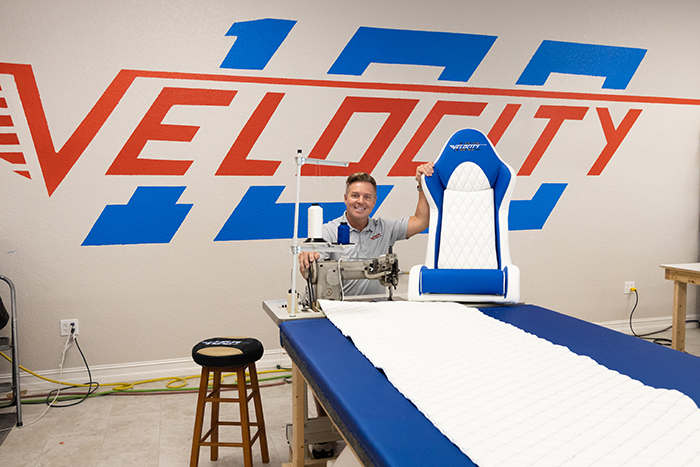 “You’ve got to make these consumers, whether they’re Velocity owners or soon-to-be-owners comfortable enough that you have the capability of building a quality product,” McCormick said. “They want to be confident that it’s not a piece of junk that’s going to break apart and all these other issues.”

“All the little things that could be made better about Velocity, Scott recognized it and he’s done that,” Porta said. “The molds are crisp, the boats are straighter. The workmanship, lamination—everything about them is higher quality than it’s ever been.”

When Bob Spitulski heard that Velocity was for sale, he thought that McCormick would be the perfect owner. Both raced offshore together in the early 2000s. 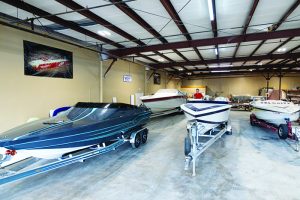 To relaunch the brand, McCormick announced the first five people that ordered a boat would get it at cost. The marketing blitz started growing the website and a Facebook page now with almost 10,000 followers.

“There’s five lucky people out there right now that got their boats at cost that could literally sell their boats right now and make good money just because of the way this the boating market is,” McCormick said.

McCormick has five marine dealerships that sell Velocity Powerboats and joining the network in January 2022 was Performance Boat Center in Lake of the Ozarks, Missouri.

McCormick grew up in Madison, Ohio, on Lake Erie and since he can remember was around boats. He had one of the first Kawasaki Jet Skis and spent the summer playing in the water with the kids in the neighborhood.

Both parents were into drag racing and if McCormick wasn’t on the water, he was at the drag strip with his parents. One of his favorite memories as a child was going with his mom and siblings in a Chevrolet Corvette to get ice cream downtown.

“The funniest thing was these guys would pull up to us and try to drag race my mom and she would just literally obliviate them,” he said. “That’s that lifestyle I grew up in as a kid. Going fast, smoking the tires. That’s probably why I got this high-performance blood running through my veins.”

McCormick’s parents divorced and his mom remarried, moving the family to De Leon Springs, Fla., when he was age 13. McCormick admits it was a shock going from the beach to inland Florida.

“It was definitely not an entry-level boat, especially for some kid who’s only 15 years old,” he said.

McCormick was having problems handling the boat and visited a local marine dealership where a salesman took him out on the water. “This guy drives this thing like it’s a kite on a string,” he said.

McCormick learned to loosen up and how to react to the feedback the boat is providing. About three weeks later while practicing in the boat, McCormick hit a boat wake and caught air.

“I just came swimming up from the bottom and I saw the boat with the nose of it sticking up and pieces of it scattered everywhere,” said McCormick, adding that a pontoon boat came to his rescue. “That was my real first wake-up call with respecting something that you don’t have control over and that you better learn how to have control over because something like this could happen in a blink of an eye.”

It was around this time that McCormick started working for Stepp at Velocity Powerboats. McCormick was also a serial entrepreneur, starting a car audio business in 1992 and later a boat transport company. His first client was Velocity.

McCormick went to work full time for Velocity Powerboats and would become the general manager for the boatbuilder. While watching an offshore race with the company’s founder Stepp, McCormick declared he could beat the competition on the water.

Stepp took him up on the proposal and built McCormick a race boat in 60 days. McCormick entered the Fort Myers Beach offshore race in 1999 and promptly won his first race.

McCormick competed in the Factory class, a competitive class at the time with teams supported by Formula Boats, Fountain Powerboats and Donzi Marine. McCormick showed Velocity Powerboats and its pad-bottom design were worthy competitors.

Velocity had gone to the Fountain factory in Washington, N.C., to race in the Factory class. Reggie Fountain said that if anyone could outrun a Fountain, he would personally write them a check for $10,000.

“Two days later Mr. Fountain had to write me a check for $10,000 because I beat him and Reggie III in the race, but I also set a world speed record for the fastest Factory E-boat,” McCormick said. “He graciously did it in front of everybody at the award ceremony and he handed me my trophy, and he handed me my check. That was one of the craziest things that I can remember ever happening.”

After the economic meltdown 15 years ago, McCormick left Velocity Powerboats and would work as a stock trader, eventually setting up three regional offices with 50 day traders in Central Florida. McCormick was buying and selling homes and looking for a new challenge when he considered acquiring Velocity Powerboats, which had closed in 2015.

“The people selling were trying to sell a company, but there wasn’t a company,” McCormick said. “It was just a bunch of molds sitting in a warehouse full of dust.”

After acquiring the company, McCormick had to wait for the build out on the 36,000-square-foot plant in Sanford. About a year after taking possession of the molds, McCormick opened Velocity in August 2019 just in time for the pandemic-induced boating boom.

The factory is turning out the product that McCormick had long wanted to deliver. The boats are race rigged with the hose clamps indexed, the screwheads are indexed and equipment is through-bolted.

“They get it right because Scott will send it back and make them fix it,” Porta said. “He wants the best product out there that is possible.”

Adds Spitulski, “He’s modernizing everything when it comes to Velocity. If you compare a 1990s boat to a 2022 boat, it’s night and day, and I think the customers and the clients really appreciate what they’re seeing. The boats are as solid as they get and as fast if not faster than what they were before.”

McCormick doesn’t regret his decision to get back into the high-performance marine industry.