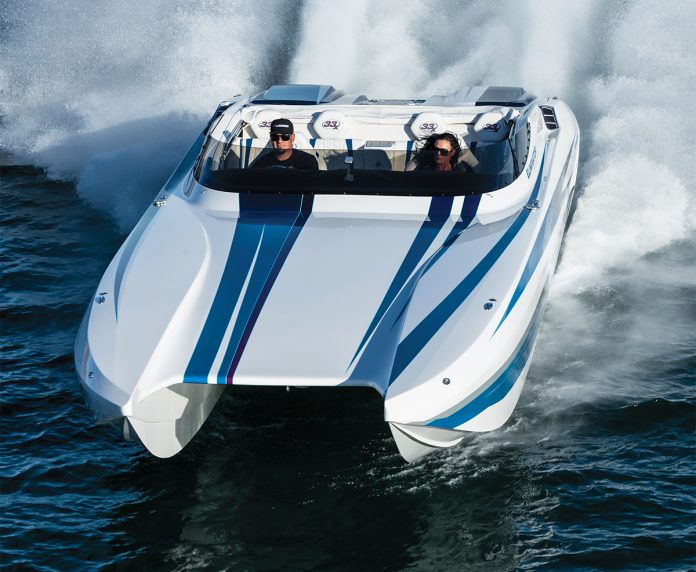 Mike Summers has been a loyal supporter of Eliminator Boats for decades, owning hull No. 1 of the legendary 30 Daytona catamaran. Summers had the catamaran for 22 years before deciding to move onto a new catamaran from the Southern California boatbuilder.

Summers bought a 33X Speedster, a new catamaran that Eliminator Boats spent about three years developing before releasing in late 2021. The model was a priority for Eliminator Boats President Jake Fraleigh after purchasing the company in 2018 with a group of investors.

“We had been talking about putting a new boat together for a couple of years,” Summers said. “Jake was telling me about the new design, and I’d get over there every three months to see how it’s going. Watching and seeing the process, I love the design and it turned out beautiful.”

As a predecessor to the 30 Daytona, the 33X Speedster (32’ LOA, 11’ 10” beam) is over 2 feet wider than similar offerings from Eliminator Boats. The additional beam improves ride and stability, especially in rougher water.

“We made the boat extra wide to pack more air,” Fraleigh said. “The boat can handle rougher water and rides very flat. Once you go wide, you never want to go back to the narrower boats.”

The 33X Speedster that Poker Runs America checked at the Lake of the Ozarks in late August came equipped with a pair of Mercury Racing 700 SCI engines with M6 drives. Additional twin-engine power options include 565-, 600-, 860- and 1,100-horsepower packages from Mercury Racing and custom power options from Teague Custom Marine. The 33X Speedster is only offered with sterndrives.

“I wanted turnkey all the time and that’s what this package offers,” Summers said. “Speed is nice but if you’re not running, you’re not doing anything. We had (Mercury) 500HPs in the other one and they ran forever. This was the next step up that I felt was the most dependable.”

Summers went with the full cap upgrade on the 33X Speedster, and the workmanship was top-shelf stuff. “It takes about 600 hours of labor,” Fraleigh said. “It’s all done in the gelcoat, and it also has an asymmetrical graphic.”

Eliminator builds the 33X Speedster using a vinyl-ester lamination schedule with Core Lite PVC (marine-grade wood is available) laminated in 1208 Knitex for the bulkheads and floor. T240 foam is used for the transom, and balsa core and Diab foam are added to strengthen hatch liners and other areas.

The 33X Speedster has a lower profile and a smaller windshield than other catamarans in the size range.

“A lot of these competitors are using a big, huge windshields with not a lot of airflow,” Fraleigh said. “We’re typically boating in a weather like today where it’s really kind of humid and warm, and you want that airflow so it’s really comfortable.”

The model is available in closed deck, open bow, walk-through and walk-off configurations. Summers opted for the closed bow version with a small cabin tucked under the deck.

“We get a lot of requests from our customers to do what we call a hybrid deck boat, but they don’t want to call it a deck boat,” Fraleigh said. “We can do the open bow for lake boating. That’s really practical, especially for people that are more family oriented.”

The cockpit consists of two adjustable-height bucket seats up front and four individual bucket seats in the rear. Narrow steps in the center provide access to the transom. One of our favorite features are the gull-wing hatches to showcase the Mercury Racing 700 SCI engines and engine compartment workmanship. Marine Industry West provided the custom hinges for the hatches.

It’s not often you will find a Bimini top on a 140-mph catamaran but this 33X Speedster had one nicely tucked away. Shade is a must for Summers, who does most of his boating on Arizona’s Lake Havasu, when hanging out in the channel or a sandbar.

“We’re really happy with the way it came out really, really happy,” Summers said. “(I) love the colors, love the scheming and interior the right down to the steering wheel. I just love it.”