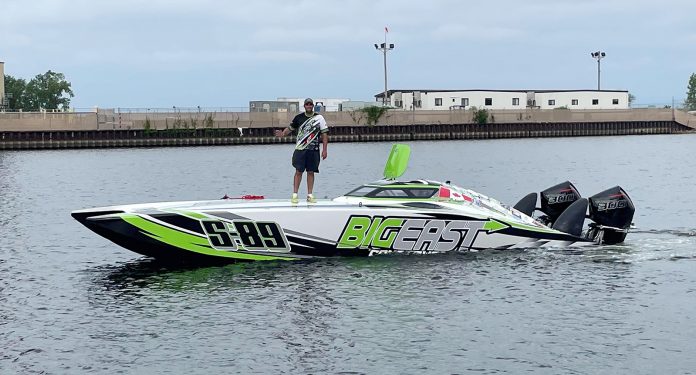 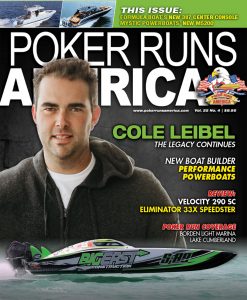 Cole Leibel and Gary Ballough this summer were running in the Sarasota Powerboat Grand Prix when the Victory catamaran rolled going into a turn.

Safely out of the boat and standing on the bottom of the hull, Ballough looked over to see the rookie driver beaming.

“All Cole could talk about was how happy he was that we were upfront running with everybody, and he was elated with it,” said the veteran throttleman Ballough. “Of course, I’m thinking of the financial aspect because it was my boat, but it took me to a better place.”

All worked well as the 32-foot catamaran had little damage and after running the seven-race America Power Boat Offshore Championship Series, wrapped up their inaugural season with a seventh-place finish in the Super Stock class at the Key West Offshore World Championships in November.

Leibel is following in the footsteps of his uncle and offshore racing legend Lorne Leibel, who has campaigned the Canada Homes and Bacardi Silver Supercats and raced over 35 years. Lorne ran with the best and shared his cockpit with such racers as: Bobby Latham in the 70s; Bob Idoni, Ed “Smitty” Smith, Bob Morgan, Gary Ballough and even Walter Regazzi  from Italy, in the 90s.

Some of Cole Leibel’s earliest memories are attending the World Championships in Key West, so it was only natural the 34-year-old Canadian would get into racing.

“Every year I say I’m going to race here, and this year will finally be the year,” Leibel said. “I’m so excited to finally race Key West Harbor I’ve been watching for so long.”

Leibel is a longtime performance boater who has owned boats from Cigarettes to Skaters. His personal collection currently has six boats (down from 12), but his favorite is a Nor-Tech 340 center console that sits in a boathouse on Lake Simcoe in Canada, where he lives with his family.

“I never been a huge car guy, I’ve tried that and it never really did anything for me,” Cole said.

While Leibel has participated in poker runs for years, he was looking for the racing action he remembered as a kid and young adult.

Leibel has found success as a waterfront home builder on Lake Simcoe with his company Big East Construction.

Big East’s newest project is an insulated, heated, and secure storage facility for boats and trailers, located in Innisfil, Ontario. There are currently two buildings and a large outdoor storage area, which can accommodate RVs, boats, trailers, and other vehicles. Big East has a company that can handle transportation of the boats, and they offer in-house trailering for customers if required.

There are now about 100 boats and 20 cars in the storage building, along with some campers. Cole plans to expand the facility by adding another building next year. (For more information on the storage opportunities please call the Big East office at 705-294-0785.)

Leibel liked the Super Stock class for its depth and the budget-friendly Mercury Racing 300-hp outboards. As a rookie driver, Leibel knew he needed an experienced throttleman and started talking to Ballough after the 2021 Key West Championships about campaigning a boat.  He has the credentials with multiple World Championships under his belt.

Ballough encouraged Leibel to race with him a couple of weeks later in Edgewood Beach, Fla., where they narrowly finished on the podium.

The partnership worked and they agreed to run the national schedule which included Cocoa Beach, Fla., Lake of the Ozarks., Mo., Sarasota, Fla., St. Clair, Mich., Michigan City, Ind., St. Petersburg, Fla., and Clearwater, Fla.  The final race of the season in Fort Myers Beach, Fla., was cancelled because of catastrophic damage from Hurricane Ian.

Originally Leibel planned to campaign a Doug Wright but when the boat wasn’t completed in time, they opted to race Ballough’s Victory catamaran, which Leibel purchased this season. The goal was to treat 2022 as a shakeout season and improve as a team.

“I definitely feel more and more comfortable, and it’s been a really big help having Gary in the boat,” Leibel said. “He has taught me so much stuff from not turning on top of boat wakes to how to enter and exit a turn. It’s been a big help.”

Ballough said he’s seen the growth in Leibel as the season progressed and appreciates the enthusiasm he brings to the cockpit.

“The stuff that I’ve learned whether it was through a mistake or through someone else’s mistake, I try to illuminate the situation before it happens because I’ve got the experience,” Ballough said. “When you’re not out front and you’re back a few boats, you have the luxury when you’re not out there for the win to try some different things.”

Uncle Lorne was at the Pier House in Key West to root on his nephew racing for the first time in Key West. Asked if he had any advice for Cole, Lorne said to enjoy the week.

“I try to never lord over him with advice and tell him what to do,” Lorne said. “I let him come to me if he has a question or asks what I saw out there. Wherever I can be helpful, I’ll be there.”

The team travels with a small crew with the Haak brothers, Mike and Andrew, providing support at the races and sponsorships from Double R Performance and Krytiuk Motorsports. Big East Construction is mostly self-funded, but are so grateful for an incredible group of sponsors that are for the most part, sub trades of his construction company, Big East Construction. Like most teams in offshore racing, Cole has been selling merchandise such as hats and shirts to promote and raise the profile of the team and the construction company.

It’s made an impression on his Uncle Lorne, who used to let Cole drive the race boat when he was a toddler.

“He’s doing great with the merchandising and he’s hustling for sponsorships, which I never did,” Lorne said.

Looking forward to next season, Cole says “Whether it’s nine races or six races, I don’t know what we’re going to do next year,” Cole said. “I figure let’s finish off the season first.”

The Big East team powered to a second-place finish in the opening race at the Key West Worlds. The duo lead Sunday’s championship race for 5 laps before blowing a fuse that cost them the championship.

While Cole’s father, Corey, owned a 32’ triple-engine Skater, he wasn’t into offshore racing. Instead, he would watch his brother Lorne race from the helicopter in Key West. One year they brought Cole—who was approximately age 7—to Key West for a boys’ trip.

They lost Cole at the races but found him a couple hours later sitting on a wall sipping on a drink. “My brother was told by his wife ‘Do not come home if you lose him,’” Lorne said laughing. “And sure enough, he loses him on the docks in Key West.”

“It’s not just about the race boat legacy,” Lorne said. “(While) it’s really neat to carry on a (legacy), hopefully he’ll start to podium and carry on a winning tradition. He’s impressive in so many ways and no doubt will be successful in racing.”