Outboard performance enthusiasts have more choice than ever when it comes to high-output motors.

It could be argued that there is no better time to be a fan of big outboard motors. Four manufacturers of conventional out-boards offer motors that make at least 300 hp and Seven Marine has models that take power to a whole new level engines that put out 557 and 627 ponies. In many cases, these motors provide re-power options that take advantage of the power to weight ratio where owners can replace three smaller motors with two higher-output versions and actually increase speed. Now let’s take a look at the choices available in alphabetical. We’re keeping our search at 300 hp and above. 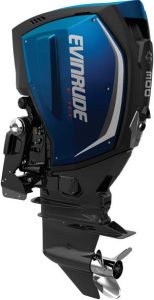 Evinrude’s E-TEC G2 300 is a two-stroke outboard with a displacement of 219 cubic inches/3441cc and a bore and stroke of 3.854” x 3.0”. The E300LU model weighs in at only 558 pounds It has E-TEC Direct Injection that atomizes the fuel for improved low-rpm combustion and it makes its 300 hp power on 87-octane fuel. Multi-point Targeted Oiling distributes lubrication throughout the motor. Alternator output is a potent 133 total amps and 14 amps at idle. The E300LU has a gear ratio of 1.85:1 and it has remote dynamic hydraulic steering.

To color match the motor to its boat, Evinrude offers the E-TEC G2 300 in hundreds of graphics combinations. The motor also comes with a full series of digital controls, including shift and throttle systems, automatic trim and the Icon Touch display.

Mercury Racing offers motors above 300 hp in two and four-stroke packages. The Verado 400R was introduced early in 2015 and what makes this motor so attractive is it fits in the same envelope as the V-6 250-hp version. Stack three on the transom of a boat that previously ran four 250s and there’s an increase in power plus a reduction in weight and that translates into serious speed gains. The motor has become an instant hit with owners of fishing boats, performance cata-marans and center consoles.

Many of the features of the 400R focus on reducing operating temperatures, which enhances longevity. A cool-air intake feeds the supercharger and then the air is cooled after exiting the blower for maximum per-formance. To reduce temperatures in the supercharger itself, it’s water-cooled. Boost pressure is monitored by to self-compensate for environmental changes. Stainless-steel guide places stabilize the engine and the advanced midsection and high-performance mounts provides solid support. Technologies such as Smart Craft, Digital Throttle & Shift and Joystick Piloting for Outboards pro-vide smooth consistent control over all that power. It’s compatible with Sport Master or the 5.44” Offshore HD gearcase and the 400R comes in a choice of color combinations.

On the two-stroke side, the OptiMax 300 XS is built on a 3.2-liter powerhead that has a stroked and balanced crankshaft. Two-stage direct fuel injection burns more completely for improved fuel economy and cleaner emissions. To make the motor compatible with a number of boats, it has a good selection of shaft lengths and gearcases.

While the 400-hp Verado comes out of the Mercury Racing facility, the 300 and 350-hp versions of the supercharged V-6 are built and sold through Mercury Marine. There are three engines offered in our size range, the 300-hp Pro FourStroke and the 300-hp and 350-hp Verado. They all feature 2.6-liter blocks that are supercharged with charge air cooling, electronic boost pressure control, sequential multiport fuel injection and make their maximum power on 87 octane. The alternator puts out 70 amps. The primary difference between the two 300-hp models is that the Verado comes in 20”, 25” and 30” shaft lengths and 1.75: and 1.85:1 gear ratios while the 300-hp Pro FourStroke comes in 20” and 25” shaft lengths with 1.75:1 ratios. Both are compatible with digital controls and Mercury’s Smart Craft and Vessel View monitors.

Seven Marine changed the outboard performance game forever with an out-board motor based on a 376-cid aluminum Chevrolet LS V-8 block with a bore and stroke of 4.065” x 3.622” and a compression ratio of 9.1:1. When the intercooled, supercharged engine was first introduced, it weighed 1,094 pounds with a 20” shaft and made 557 hp, giving it one of the most advantageous power-to-weight ratios in performance boating.

In 2015, Seven Marine upped the ante, raising output to 627 hp in the same pack-age. The engines make their power on 89-octane gasoline and make more than 600 foot-pounds of torque from 3000 rpm through the power curve. To make the engine look as good as it runs, the company developed what it calls the SpectraBlade cowling that gives the motor a sleek profile and is available in a multitude of colors with integrated LED lighting that makes the out-boards come alive at night.

The Seven Marine engines are controlled by ZF Marine’s Smart Command 5000 system that integrates throttle, shifting and joystick control and all engine functions are monitored by a multi-function screen. 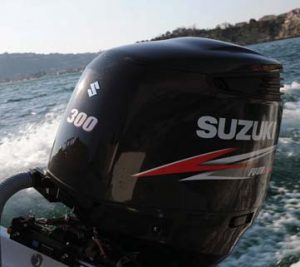 Suzukis’ 300-hp DF300AP is the biggest motor in the manufacturer’s lineup. The V-6 block weighs in at just over 604 pounds for the X model and it’s a double-overhead cam 24-valve block with multi-point sequential fuel injection. The addition of lean-burn control with an oxygen sensor can provide an improvement in fuel efficiency during cruising. 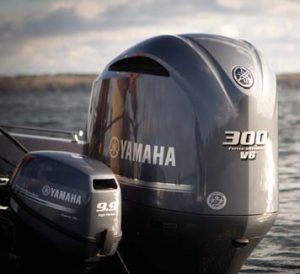 Offshore fishermen have raved about the dependability of Yamaha outboards for years and for our power range, the Japanese manufacturer makes its 4.2-liter V-6 300-hp model and the massive 5.3-liter V-8 350-hp version. Let’s start with the V-6, which is a 60-degree block that displaces 254 cid and has a bore and stroke of 3.78” x 3.78” with a compression ratio of 10.3:1. Fuel is 89 octane and delivered to the intake with multi-point injection. Alternator output is 70 amps. The motor is available in 25” and 30” shaft lengths with a gear ratio of 1.75:1.

The big daddy is the 350, which displaces 5.3 liters, is built on a 60-degree, 32-valve V-8 block with a compression ratio of 9.6:1. Bore and stroke is 3.7” x 3.78” and it makes its full 350 hp at 5500 rpm. Gas is injected with a multi-port system and Yamaha recommends 89-octane fuel. The exhaust is an in-bank system with Power Surge Chambers for the most efficient flow of fumes from the combustion chambers. Like its smaller counter-part, the F350 is available in 25” and 30” shaft lengths and the gearcase has a ratio of 1.73:1. Both engines work with Yamaha’s Command Link Plus digital monitoring system.