You don’t pick just any truck off the lot to tow the pace boat for the Key West World Championship, and the Power Boating Canada and Poker Runs America official pace boat.The pace boat and tow vehicle must be on time to reach the starting gate as the flag drops… and they have to be spectacular – the eyes of the performance boating world will be focused on the rig.

For the past 20 years, Poker Runs America has been active in helping race promoters throughout North America by serving in the role as pace boat. The spectacular 47’ Fountain, with special VIP hull built by the legendary Reggie Fountain, is powered by supercharged Mercury 1075 engines and delivers speeds in excess of 120 miles per hour. When the flag drops the boat roars into action, leading the fleet of contenders as they challenge the waters in pursuit of the coveted championship trophy. 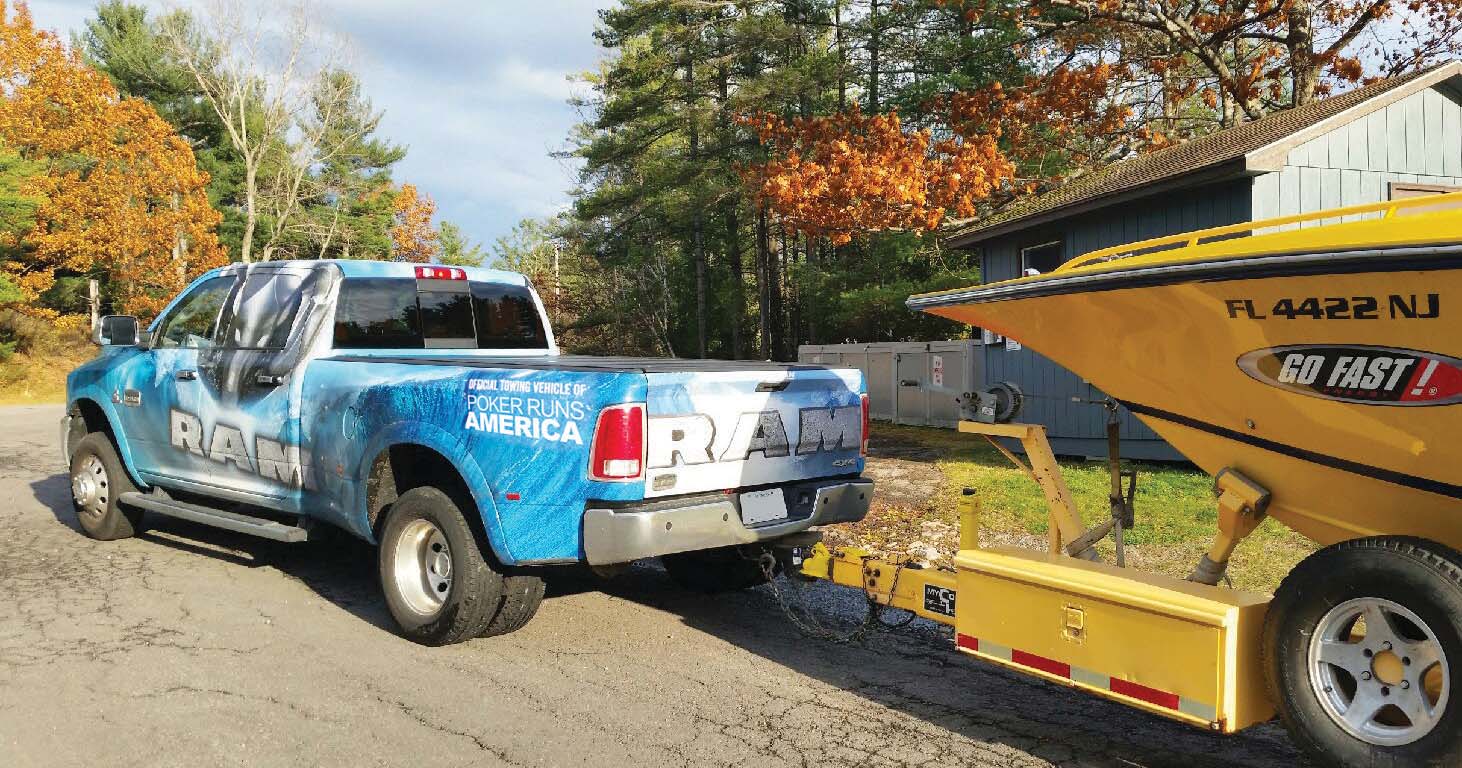 To tow the pace boat we spec’d out a top of the line 2015 RAM Laramie Limited with 6.7- liter Cummins High-Output Turbo Diesel dually to serve as our Official Tow Vehicle for the year. 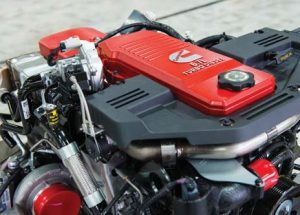 With the Fountain and Myco trailer tipping the scales at just over 20,000 pounds dry weight, and a capacity of 300 gallons of fuel in the boat bringing the potential weight of the rig to more than 23,000 pounds, the Ram’s Cummins High Output Turbo engine is ideally suited to handle the load. The Cummins produces 385 HP at 2,800 rpm, delivering best-in-class 900 lb.-ft. of torque.

Dominating the torque charts, the renowned 6.7-liter Cummins Turbo Diesel I6 is available in three versions. The first version is paired with Ram’s segment exclusive six-speed manual transmission, which features a wear-compensating clutch for lifetime like-new performance and a dual-trunion shift tower to accommodate a compact shift pattern. This combination delivers 350 horse-power at 2,800 rpm and 660 lb.-ft. of torque at 1,400 rpm. The second option matches the Cummins to the 68RFE six-speed automatic transmission. The diesel engine cranks out 370 horsepower at 2,800 rpm with an unsurpassed in ¾-ton trucks 800 lb.-ft. of torque at 1,600 rpm.

The engine and transmission installed in our truck is the 6.7- liter Cummins High-Output Turbo Diesel I-6 paired with the Aisin six-speed automatic transmission (AS69RC), leaving no doubt to Ram Heavy Duty’s capability. The AS69RC transmission features wide gear ratios that contribute to impressive shift performance, efficiency and drivability.

The Ram Heavy Duty also features another innovation, the industry-exclusive Ram Active Air intake system. When the intake system senses extreme heat, it draws cooler air from the front of the vehicle – a function that also engages at high altitudes for superior throttle response in low oxygen environments. When conditions are wet from snow, ice or water-fording, the system pulls air from an under-hood inlet, clear from snow packing and water.

Several features of the Ram were ideally suited for our frequent trips up and down the Eastern seaboard. We were impressed with the unsurpassed diesel powertrain warranty – five-year/160,000-kilometer and the best-in-class 24,000-kilometer oil change interval on the Cummins diesel engine. The technology behind this is state-of-the-art. To handle the increased towing capacity, Ram engineers beefed up the rear axle ring gear hardware from 12 to 16 bolts on all trucks equipped with the 11.8-inch axle. The additional hardened bolts and stronger materials are used in the differential case to assure long-term durability. Ram is the only automaker to back its entire pickup truck line and towing claims with SAE J2807 test-ing criteria.

The Ram 3500 also adds new innovation including an all-new 5-link coil suspension with a supplemental air bag suspension option. This results in exceptional ride, handling and capability. The exclusive five-link coil design provides better articulation over obstacles than a leaf spring system and the robust coil springs are more than up to the task of handling the payloads required.

With HD pickup, you often have to compromise between towing performance under load and ride comfort when touring solo. In the Ram 3500 the load leveling capacity is controlled by a system that automatically detects load on the rear suspension from a trailer or payload, and adjusts the air pressure in the suspension until the vehicle reaches normal ride height, leveling the truck, improving stability and delivering a very comfortable loaded ride.

The driving experience is a pure pleasure. In the front, the Ram Heavy Duty line features an advanced three-link front suspension to ensure roll stiffness. Greater roll stiffness, also known as body roll, is an important characteristic in taller vehicles and especially trucks with heavy payloads. Roll stiffness is measured by the amount the truck’s body tips side-to-side, independently of the wheels, during cornering. In a heavy-duty application like our Official Tow Vehicle role, you need a front end that is as tough and sophisticated as the rear – the Ram 3500’s ront axle GAWR is rated at 6000 pounds.

When we checked out the range of pick-ups that are available in this segment, we found that the Ram is unmatched in terms of offering the most complete ‘hitch ‘n go’ towing prep package found anywhere in the heavy-duty category. As an added convenience, Ram features an in-box connection junction and a standard Class V receiver hitch with a four or seven pin connector on the bumper. A cargo view camera, mounted in the center high-mounted stop light (CHMSL) provides a view of the bed for easier hitching with a fifth wheel or gooseneck trailer. Also, a flat-load floor option is now available on Crew Cab models, featuring fold out panels that create a flat surface across the floor of the rear seating area.

Our Official Tow Vehicle was wrapped in a custom designed motif created for us by The Taylor Group of Mississauga, Ontario. The design, featuring Ram logos and the churning water images of a high performance boating adventure, added to the impression of speed on the water. The rig turned heads at some of the summer’s largest waterfront spectaculars including the 1000 Islands Poker Run, where more than 35,000 spectators enjoyed Canada’s largest in-water performance boating event, and the Ottawa River Festival, bringing the thrill of performance boating to the beautiful Prescott-Russell region. We also displayed the tow vehicle and pace boat combination at the Belleville Waterfront Weekend in July, at the Mike Fiore Memorial Poker Run at the magnificent Golden Nugget Casino in Atlantic City, NJ, and at our Poker Runs America Season Finale Poker Run in Cape Coral, Florida.

From the Canadian waters to the Key West World Championships in Florida, the rig attracted attention up and down the Eastern seaboard, leaving spectators with only one burning question… what design will the creative team come up with for the 2016 Official Tow Vehicle?

Stay tuned as we reveal the secret plans in the coming issues..

Our 2015 Ram 3500 Laramie had a base price of $72,495 with $14, 825 in options and $1,745 delivery charge for a total of  $89,165. before taxes and license.One element to consider is that with the four-door Ram 3500 HD dually the pickup falls into the weight category that requires a CVOR certificate – this commercial vehicle operator’s registration involves a written test, which is quite challenging. Considering that many recreational boaters driving a pickup like this do not encounter any of the commercial bus and truck situations that the CVOR is designed for, the licensing and registration process really needs to be re-evaluated by the various provincial trans-portation authorities.

With our extended road test period almost at a close, we are now setting up a 2016 model for delivery. 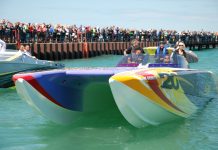