With a new engine configuration and ethanol fuel, the 51’ Mystic catamaran, American Ethanol, could be the performance boat of the future. 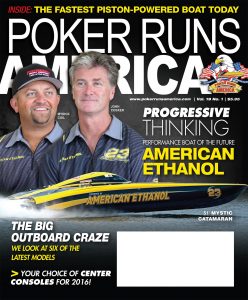 When the 51’ Mystic catamaran, American Ethanol, ran 208 mph to take top honors at the 2015 Lake of the Ozarks Shootout on August 29, the achievement was the culmination of nearly a decade of work on the boat’s unique engines by team owner Don Onken.

The boat is powered by four 582-cid big-block Chevrolet engines that produce a total of 7,700 hp. What makes the configuration unusual is that the port and starboard engines are linked with couplers to create, in essence, two V-16 powerplants, the only ones of their kind in the marine industry.

The design was originally Onken’s idea and he purchased the assets of Lightning Performance Group in Florida and hired longtime engine builder Keith Eickert and experienced offshore racing crew chief Earl Moorman to come to Illinois to work on the V-16 engine and other projects. Onken also owns Onken Inc., which specializes in bulk oil and grease recycling and Oil Filter Recyclers, which is pretty self-explanatory.

Moorman is the general manager at Lightning Performance Group in Illinois and at the team’s shop Lake of the Ozarks. He worked with the Team CRC in offshore racing and with Slug Heffner’s dragboat team. Moorman has experience with computerized fuel injection systems, CNC machining and with dynamometer testing.

Onken has been a player in the performance-boat world since he raced offshore in a 38’ Bertram V-bottom called Mr. Goodwrench in the 1990s. Throughout that time, he also was a regular participant in the Lake of the Ozarks Shootout. In 1990 he made his debut at the event in a Formula that ran about 70 mph.

He first got into big catamarans around 2005 with the four-engine Skater 46, Big Thunder Marine, that had been campaigned by the late Bob Morgan. Onken rigged the boat with four 950-hp Lighting Performance fuel-injected engines with two Arneson drives and chain boxes.

The Lighting Performance Group purchase was completed in 2009 and Onken, who has 20 plus patents on various products, put Eickert to work developing the V-16 engines. The current motors are built on cast-iron Dart blocks with Brodex cylinder heads, Winberg crankshafts, Carillo connecting rods, CP pistons and Lightning Performance Group fuel injection with custom-made intake manifolds. The engines are regulated with a Holley management system. The drives are Arneson Surfacing ASD 10s with SCS gearboxes with 1:1 ratios. The propellers are Hering five-blades. The drives are fixed in a straight position and the boat has a rudder for steering.

In 2011, Onken switched from the Skater to his first Mystic, an open cockpit model, and experienced an instant 20-mph speed increase. In 2012 with Mystic president John Cosker and Myrick Coil, a well-known offshore racer from Lake of the Ozarks, in the boat, the team ran163 mph. Additional testing with his son JD led to a speed of 177 mph.  “We decided that was too fast for an open cockpit boat,” said Onken. “That’s the reason we built the new boat.”

The current 51’ Mystic made its debut at the shootout in 2013 and ran at the end of the day, hitting 186 mph. “That was the first time we ever put the throttle down,” said Onken. In 2014, the boat hit 188 mph and had problems on each pass. The engines were on the rev limiters on the first pass and then they blew a blower hose on the second pass.

The V-16s originally had 1471 roots-style superchargers running on gasoline. As soon as the team switched to Vortech superchargers and E90 Ethanol, output increased from 1,200 hp to 1,900. “We knew we had a tiger in the tank,” said Onken.

For the 2015 season, Moorman and Onken upgraded the engine’s fuel systems with bigger injectors. Onken said the team conducted about 300 dyno pulls before figuring out the fuel and engine management system.

The final ingredient in the process was the fuel. “We’re farmers and we raise corn,” said Onken. “We want to promote ethanol.”

The team started running ethanol three or four years ago. Onken and his sons JR and JD started talking with Ed Hatton who kept his boat at their Lake of the Ozarks shop and was an investor in an ethanol plant in Iowa and he put the Onkens together with the folks at American Ethanol. Kelly runs the American Ethanol sponsorship program and a team was soon formed. The Onken race team would like to thank those that support American Ethanol, including members of the Growth Energy team and their families: Kelly, Rick, Jeff, Mark, and Ray, the film crew, the families of the race team crew, and all of the investors and farmers that support the production of American ethanol.

The benefits of ethanol are numerous. One of the biggest is that it helps cool the air intake for the engines and keep operating temperatures low.  Additionally, ethanol also has cleaner emissions and is biodegradable, which makes it more attractive for the marine industry.

With the support of American Ethanol and the engines dialed in with the new fuel system, Onken’s team was ready for this year’s Shootout. With Cosker again on the throttles and Coil driving, the boat headed out to the course. Cool morning temperatures and some chop helped free up the 13,000-pound catamaran. In its first pass, the boat ran 208 mph to tie the piston-powered record for the shootout and to claim the Top Gun trophy for 2015.

Of course Onken isn’t done. “We need to go to the next stage now with bigger engines and more horsepower,” he said. He and Moorman have new 600-cubic-inch engines that he projects will make about 2,300 hp each. Cosker has calculated the projected speeds at about 220 mph, which he said would be fast enough. “I think the Ethanol people are happy with us,” Onken said. That’s a pretty safe bet.

Since 2005, a Mystic catamaran has been the fastest boat at the Lake of the Ozarks shoo tout every year except one. And from 2002 to 2004, a boat that Mystic Powerboats John Cosker either developed himself or re-designed took the top honors. He started in 2002 with a 50’ Tencara catamaran that he throttled for owner Dave Callan and ran that until 2004. From 2005 to 2007, they campaigned a Cosker design called Callan Marine. That design evolved into the current 50’ Mystic catamaran. Dave Scott and John Tomlinson won the shootout from 2008 to 2011 in Scott’s 50’ Mystic, while the turbine-powered 50’ Mystic My Way took the Top Gun in 2013 and finally Team Qatar made its 244 mph pass in 2014 and American Ethanol tied the record for the fastest piston boat at the event in 2015.

Before the Mystics, Onken started in catamarans with this 46’ Skater called The Recycler. It was named for Onken’s oil and grease recovery business.

Onken throttled this 38’ Bertram offshore raceboat in the Great Lakes Offshore Powerboat Series and other events during the 1990s.