Norwegian boat manufacturer Predator Luxury Performance Boats (www.predatorboats.no) has teamed up with performance-boat veteran Ben Robertson to sell the company’s boats in the Americas. The joint venture will be known as Predator Boats U.S. by Ben Robertson and the company will have exclusive rights to distribute the Predator line throughout the Americas including the United States and Canada in North America and throughout South America.

The first boat that will be brought to the United States by Robertson will be the Predator 447-R, a 46’ quad-stepped V-bottom powered by twin staggered Mercury Racing (www.mercuryracing.com) 1350s with M8 drives. It’s equipped with Mercury Racing K-planes and IMCO hydraulic steering. The boat weighs 15,000 pounds and Robertson said it will run speeds in the 140-mph range. It will be on display at the upcoming Miami International Boat Show. The slip number has not been assigned yet and Robertson was working with Mercury Racing to try to have the boat included in the engine manufacturer’s display. 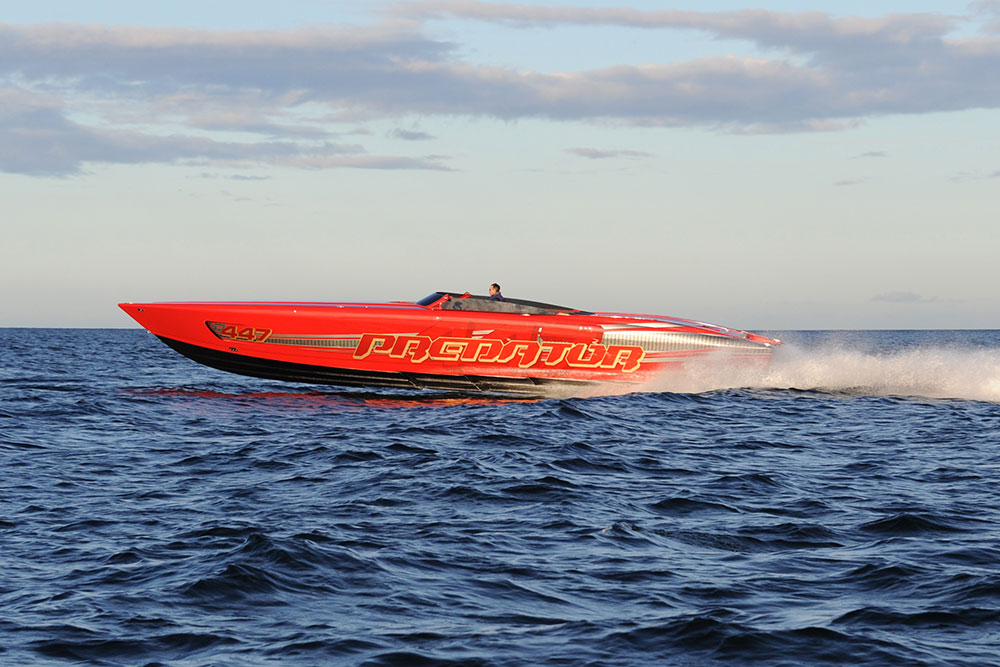 Predator president Andree Bakkegaard started the company in 2009. He had worked at Nor-Tech (www.nor-techboats.com) learning the trade before returning to his native Norway to start Predator. He brought a Predator 337-R to the Super Boat International (www.superboat.com) world championships in Key West, Fla., two years ago and that boat was sold to a customer in Lake of the Ozarks.

Robertson saw the 447-R at this year’s event in Key West and was impressed with the craftsmanship. “I’ve never seen a boat with as much attention to detail and finish work,” said Robertson who has worked with Fountain powerboats (www.fountainpowerboats.com), Cigarette (www.cigaretteracing.com) and other companies as a consultant.

The Predator 447-R’s bottom was designed by Bakkegaard and the boat is built with a carbon-fiber Kevlar laminate and the transom and stringers are cored with composite linear foam. “It’s way over built,” said Robertson. He cited the example of the boat’s champagne glass racks that are built on a shock-absorbing system so the stemware doesn’t break during a hard offshore run. Belowdecks, the 447-R sleeps four including in a V-berth in the bow with a private head and small galley. The cockpit has side-by-side bolsters to starboard and dual steering wheels at the helm. Aft, there are three individual bucket seats with grab handles for the occupants. A wraparound windshield protects everyone in the cockpit from the elements.

For now, people interested in a Predator can check out the website. Robertson is working on a new site for the joint-venture that he hopes to have up and running soon.