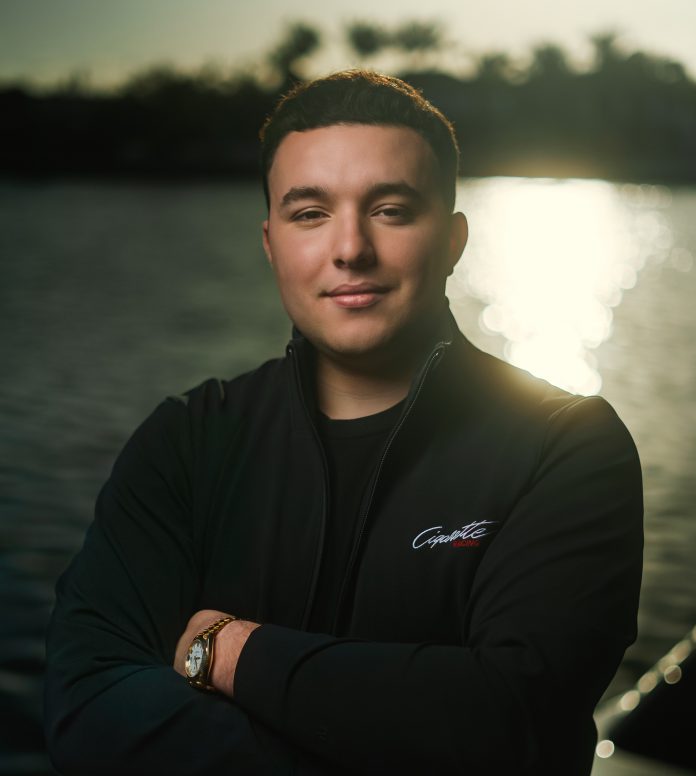 Some of Alex Ruiz’s earliest childhood memories are of riding in the family’s Cigarette going for brunch in the Florida Keys. Now at age 22, Ruiz is at the helm of Cigarette Racing Team and has ambitions to make the iconic brand a household name well beyond the marine industry.

It might seem bold for a young CEO who recently graduated from the University of Miami, but Ruiz has been training for this opportunity since he was a small child. He was the catalyst for the sale of Cigarette Racing Team when few people knew the Opa-Locka, Fla., company was for sale.

“My passion is business, being an entrepreneur, making business deals happen, thinking of different ways to further companies that we own already, and then creating new companies that can go to great heights as well,” Alex said. “I’ve always been involved in this. I’ve had tons and tons of experience already, you know, so I’m not your typical 22-year-old coming out of college. I’ve been working since I was 17.”

“My passion is business, being an entrepreneur, making business deals happen, thinking of different ways to further companies that we own already, and then creating new companies that can go to great heights.”

This May will mark the one-year anniversary of the acquisition of Cigarette Racing Team from the previous owner Skip Braver, who bought the company in 2002 for $11.5 million and revived the brand with new models, including a center console, and a high-profile partnership with car builder AMG and other luxury brands.

“When (Skip Braver) found out that the Ruiz family was going be a part of it also, he felt very comfortable with that part because he knew that the company was going to be in great hands,” Alex said, adding, “I think it was a dream come true for him as well because he knew that somebody really had a passion for the brand and company to come in and take it over.”

In announcing the sale, Braver said, “I’m confident in their ability to take the company to even greater heights based on their own successful ventures, resources and business knowledge.”

For Cigarette co-owner John H. Ruiz it’s a dream to own the company, especially after being a customer since 2002 and owning several models.

“I never imagined that when they told me I was interested in buying a boat manufacturer that it would be my favorite brand,” said John, who is an attorney. “I’m a fanatic of the brand and now I’m available from the ground up.”

The heart of Cigarette Racing is still building high-performance boats, which start at $600,000 and can easily top $3.5 million. Since the acquisition last year, Alex said that sales have tripled and the wait time for a new Cigarette is now three years. (The goal is to bring down the wait time to eight to 10 months.)

Even as Cigarette Racing increased production from 20 to 50 boats in 2021, the company still can’t keep up with demand. To add more production capacity, the company is in the process of acquiring two industrial buildings in the Miami area.

The additional space will not only allow the company to build more boats, Cigarette Racing is bringing additional upholstery and parts production in-house after purchasing larger CNC machines.

Like most companies in the marine industry, Cigarette Racing has ramped up hiring to expand its 75-person workforce. Erik Christiansen, who joined the company in 2019 after 21 years at Mercury Marine, stayed on after the sale. Christiansen will be busier than usual as it expands into other arenas.

The company has expanded its dealer network through Top Gun Yachts, the official worldwide distributor of Cigarette Racing Team, and even added a dealership in Southern California, where offshore boating has been waning for decades.

It would be easy to dismiss Cigarette Racing Team’s ambitious expansion plans as a hyperbole but with a billion-dollar ownership group behind it, the company has the financial resources to make it happen.

The company currently offers nine models spanning from the classic 38’ Top Gun to the 59’ Tirranna. A new 52’ V-bottom is expected to debut soon with a 70-footer anticipated to join Cigarette’s lineup in 2023, Alex said. Cigarette is in the process of bringing back the 35 Café Racer and a superyacht and dedicated fishing center console.

John said they’ve retooled all its models, revamping the hulls to create a deeper-V and upgrading hardware where needed.

Cigarette Racing is developing a personal watercraft, which it is designing and plans to build in-house. He says the limited-production PWC will be the “best in class” in construction and performance with the first model set to debut this summer.

Beyond the water, Cigarette is looking at a branded residency like the Porsche Design Tower, a luxury residential skyscraper in Miami. Alex has been hunting for potential properties and said the real estate holdings are part of the plan to diversify and leverage the brand.

He is also looking to create Cigarette lounges across the country, placing the member-only lounges in popular boating destinations including Key West, Fla., Miami, New York and possibly Los Angeles. Members would have to purchase a non-fungible token (NFT) to join.

“We’re doing different things like that to engage the younger generation, but also the generation that has loved Cigarette for years and years,” Alex said. “The idea behind it is to create a unique experience.”

Fans could see Cigarette Racing hypercars and electric vehicles as well as luxury watches with the ubiquitous No. 1 logo.

The company is launching its own apparel line in the coming months, which is being led by Alex’s older sister, Cristina, the company’s chief marketing officer. Cristina is behind the first-of-its-kind officially licensed Cigarette products, featuring recycled fabrics and socially responsible manufacturing. The Cigarette line is expected to feature collaborations with celebrities and top fashion brands.

John said their approach to Cigarette Racing is far different than the previous owners.

“I think Skip did a great job in the way that he was kind of piecing Cigarette together, but our management style and our vision is probably completely different,” John said. “We’re very aggressive with new brands and we’ll sink money into it because we want to expand it.”

“Alex sought out the $32.6 BILLION merger and acquisition”

Being a 22-year-old CEO, Alex has a pulse on the younger generation. While it seems a 20-something year old wouldn’t have the means to buy a $500,000 powerboat, Alex begs to differ.

“There’s a wave now of young guys making tons of money in all these different markets with cryptocurrencies and technology,” he said. “There’s a lot of youth that has actually created wealth.”

Diana Diaz, Cigarette’s Chief Communications Officer, says it’s one of the reasons the company is investing to expand its events and social media efforts to reach a younger demographic, through Instagram and other platforms, creating an entry-point to Cigarette.

“You don’t have to own a boat or be a boater to love Cigarette,” Alex said.

Diaz credits Alex with bringing a new, fresh approach to the Cigarette Racing Team brand, that is reaching a whole new wave of consumers. She points to Cigarette’s participation in Miami’s Art Basel, where the boat world met the art world with famed street artist Alec Monopoly painting a 1995 Cigarette 35 Café Racer at the sold-out event that attracted more than 1,000 participants and garnered international media coverage.

“Alex is doing an incredible job bridging the gap between traditional Cigarette boating enthusiasts and a new generation of fans who want to be part of the Cigarette lifestyle,” said Diaz, who worked as a newscaster at WSVN-Fox News for 24 years. “Having grown up on Cigarettes, Alex appreciates the history of the legendary brand while having his pulse on the younger generation and what Cigarette can offer them. His business strategies and vision have been hugely beneficial to the growth of the company.”

Cigarette Racing is going big at the Miami Boat Show with its return to the Miami Convention Center in South Beach. Alex said they will debut at least one new model but are leaving the details until the show.

“We’re going to make a big splash at the boat show,” he said. “I think everybody is going to be very jaw-dropped with what we’re doing. You’re going to see a debut of what the future holds for Cigarette.”

Returning to the Roots

Cigarette had a big presence in offshore racing since Don Aronow founded Cigarette Racing in 1969. When Braver owned the company, he went in a different direction focusing on poker runs and lifestyle events.

Now the new ownership group is charging back into offshore racing, signing a five-year deal in 2021 to sponsor the Key West World Championship. This May the company is funding an offshore race off Miami to coincide during the F1 Miami Grand Prix and celebrate the 75th anniversary of offshore racing in Miami.

John, through his company MSP Recovery, sponsors a Stock V Activator owned by Pete Riveiro. He also brought the 515, a 51-foot offshore boat to support the Key West World Championships in November.

If Alex feels any pressure as one of the youngest CEOs in the country, he doesn’t show it. He’s confident in his abilities and he’s brought his older brother, Johnny, in as the chief operating officer and his sister, Cristina, as chief marketing officer. Johnny has a law degree and Cristina will earn her law degree in May. Alex is expected to pursue his law degree later this year while running the company.

Alex said playing sports growing up and baseball at the University of Miami taught him how to handle pressure. “It kind of sets you up for a life like this and living under the spotlight and scrutiny,” he said.

John pushes back against criticism of naming his youngest son to run the flagship boating brand. He points out the $32.6 billion merger and acquisition was put into motion because of Alex who sought out the deal. Family friends noticed Alex’s business acumen even when he was a teenager.

“Because of the resources that I’ve been able to create, a lot of kids would just relax and not work, but I sat them down and (told them) I don’t believe in that,” John said. “I’m a guy that started with an $800 credit card debt that my dad loaned me. I worked super hard to make it to where I am. I want them to do the same thing, even if they are in a very good financial position, they’ve got to work hard.”

Alex isn’t concerned with the critics, instead he’s focused on taking Cigarette Racing to the next level.

“I do want to make a staple of breaking the age barrier so that people can respect the younger generation when it comes to business,” Alex said. “I had to deal with it, and I don’t think that many other people should not have to deal with this, which is people need to respect you no matter who you are, no matter what age you are”.

“When you’re in the business world, people need to respect you, not because of not because of age or anything else, it’s because of intelligence and what you can bring to the table.”