When I was assigned to test the Sunsation Powerboats’ 34 Center Cabin Extreme (CCX) during the Miami International Boat Show, I didn’t know what to expect – but I knew it would be something really cool. I have known the owners of Sunsation Powerboats, Joe and Wayne Schaldenbrand, for several years and have admired their skill set for creating and building models with incredible detail.

Sunsation has grown considerably in the last two decades. They have built a customer base that has a cult-type following and it’s widely known that once you are a Sunsation owner, you’re always a Sunsation owner. That’s not surprising to learn considering the Schaldenbrands meet the demands of their customers to a “T” and thrive on building new models that suit individual performance boating lifestyles. Perhaps that’s why the Michigan-based company has withstood the test of time despite the certain economic challenges.

Unless you have been under a rock for the past several years, the emergence of SUV center consoles market has grown into a viable alternative to ultra high performance boats.  The basic center console design has now been converted to a surrogate deputy with efficient outboard power, immense deck space and comfort (not too mention sleek, sexy lines). Companies like Nor-Tech, MTI, Concept Boats, Deep Impact, Midnight Express, and now, Sunsation, have all met this demand. 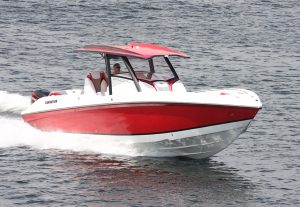 But not only did Sunsation meet the demand of the competitive SUV market, they seemed to have surpassed it. Following the announcement of its new 2013 34’ CCX in early 2012, I wasn’t sure if they were going to hit the mark in such a competitive arena.  That was, until, I saw the 34’ CCX at the Sea Isle Marina and Yachting Center (the in-water portion of the Miami show).

Approaching the slip, the first thing I noticed was the 34’s arousing shear line – it was definitely non-conventional, but had a style all its own. The hard top caught also my attention right away and it was like no other that I have seen before. In fact, it’s as extreme as hard tops can get. Rather than resorting to the standard tubing for the top mounts, Sunsation went one step further in design and construction and created a clean, aerodynamic, elliptical-shaped structure made of carbon fiber.

My eyes then began racing all over the boat.  I felt as if I were a little boy on Christmas morning. I boarded the boat and headed forward to examine the 34’ from bow to stern. Looking aft, the attention to detail in the layout and deck is obvious. With the windless and anchor locker is 200 feet of line, 15 feet of chain, and the ideal cleat placement. Just in front of the locker, of course, is a forward lounge with ample (and finished) storage compartments below the cushions. Deep and large drink holders will definitely raise the comfort level. Looking aft, the forward cockpit depth and non-skid are all spot-on.

More comfort can be enjoyed on the ergonomically-designed lounge just forward of the console, which looks larger than the ones you see in Miami’s trendy night clubs. While walking aft, there’s a full length recessed stainless steel gunnel mounted grab handle for added security when underway. 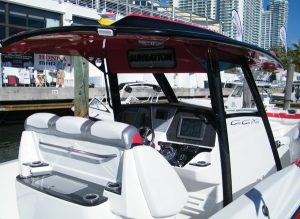 The thoughtful appointments continue with a full windscreen from the top to the bottom of the console.  It was so clear and clean, I almost failed to take notice. It’s also removable for towing.  The dash of the 34’ was clean and simple with two of the large, popular Garmin 5212 touch screens mounted to the matching carbon fibre Texalium dash panels. In direct line of site was the Mercury SmartCraft system.

Entertainment can be enjoyed night or day thanks to stylish LED flood lighting and Kenwood/Polk Audio stereo speakers mounted and recessed into the hard top. Comfort in this area is highlighted with an immaculately upholstered three-person helm bench featuring drop down bolsters. The featured, molded foot rests are accurate and correct. More storage is under the helm station and this too, was neatly configured.  Just behind the seat, is an insulated top-loaded 90-quart cooler with recessed lighted drink holders and grab handles.  Located aft, against the transom, is a custom flip-up rear bench with a port side walk through obstruction-free transom door leading to the swim platform. 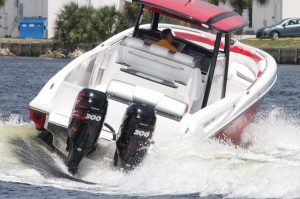 The anticipation of viewing the 34’ I compare to opening stockings and presents on Christmas morning. Of course, there’s always the “big” present and in comparison to the 34’, the clincher is the model’s cabin, which is easily accessible through the large entrance door. With this design, Sunsation has forevermore changed the concept of the center console or in their definition, the center cabin market.

In two words, it’s huge, reaching 13 feet long and five feet wide with a class-leading seven, six inches of headroom. There’s all the amenities comparable to a boutique hotel suite and sitting on the large port side lounge with Joe, Wayne, and Kyle Schaldenbrand, my first perception was that I was in a boat two fold its size.

The day of our test, Miami was experiencing a cold snap in the low 40’s.  With four people in the cabin with the door closed, we could have invited several more passengers to comfortably join us. Viewing the large 32-inch TV, I was in awe over the utilization of every inch of space. A U-shape plush lounge, storage compartments, Corian counters, stainless steel sink with electric faucet, a pump out porcelain toilet, drink holders, to name just a few features, were all conveniently located and not obtrusive or cluttered. 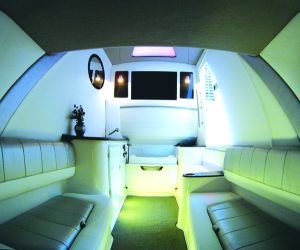 Brilliant natural lighting was provided by a frosted polycarbonate recessed sky light in the top of the console, which added a touch of warmth to the brisk morning. After 30 minutes of conversation, it was time to put the Mercury 300 Verados and the 34’ to the real test.

We left the Marina with seven people on board and a load of fuel and headed out to Miami’s Biscayne Bay.  The 34’ carries 250 gallons and the fuel gauge was reading more than three-quarters.  In addition, there was the dry weight of 9,150 pounds, and 2,500 pounds of payload on board.

Once in open water, I eased the throttles forward with full negative trim and no tabs and the 34 popped on plane with no loss of horizon. Powered with the twin Verados, which is more than ample power for this model, we remained on plane at speeds in the low 20 mph-range. Easing the throttles forward, acceleration was exceptional all the way to wide open throttle at 6,000 rpm with the GPS reading an impressive 62 mph. The boat was propped with 22-pitch Mercury Bravo 4 blades. Joe informed me they have seen faster speeds with a 24-pitch prop of 65 mph and a light payload.  What I would like to emphasize that the test boat was optioned out with the large hard top, huge windscreen, three-quarters fuel, seven passengers and a full 90-quart cooler. 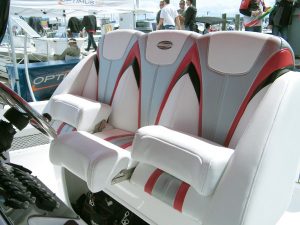 As the 34 CCX was almost two years in the making, it seems that the team at Sunsation thought very methodically about its design and the several man-hours put into this model is evident. During the R&D on the 34 CCX, Joe told Poker Runs America that this is a boat for nearly everyone and nearly everything. “It’s all about fishing with the guys in the morning, enjoying watersports with the kids in the afternoon, then picking up the ladies and going for dinner in the evening.”

Based on its series of luxurious amenities, performance characteristics, and utmost comfort, I believe him. It’s a model that’s a departure from several SUV models that are currently available on the market and most importantly, it’s a model that is very well built, very well executed and has a welcome, fresh perspective in every regard. 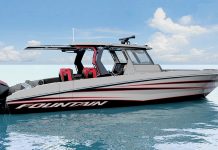 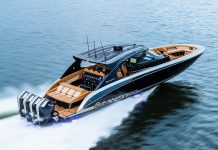