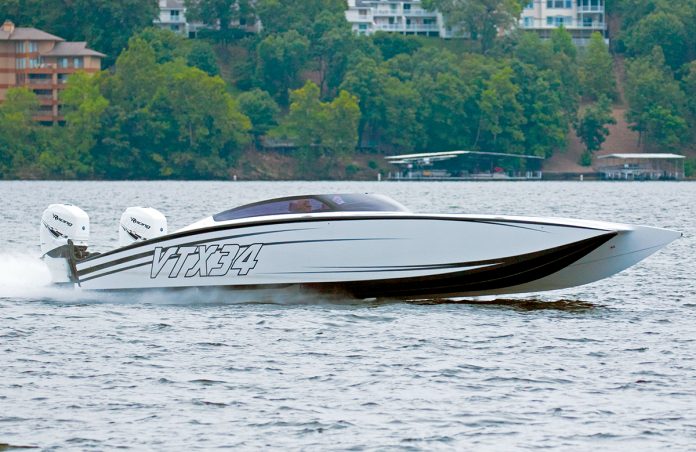 The Victory Team has long been associated with offshore racing and last year the organization moved into the pleasure sport catamaran market, offering models from 27 to 34 feet.

The latest model, the VTX 34 Cat, had a coming out party last summer at the Lake of the Ozarks Shootout. Purchased by John Pugh and Janet Matzke of Seattle, the catamaran with twin Mercury Racing Verado 400R outboards was a stunner that turned heads on the dock.

Built in the same Dubai facility as the team’s race boats, the VTX 34 Cat is proof that Victory can compete in the recreational boat market too.

“It’s kind of like an iPhone, it was just a simple, clean style of boat, totally different,” Pugh said. “I saw the Victory and I was aware of who Victory was, I thought these are guys who build race boats. This isn’t some new guy that started out working out of his garage, these are some people that maybe forgot more about boat building than I know.”

Pugh was looking to replace his Nor-Tech 3600 Supercat and had been shopping catamarans when he saw Julian Maldonado at the Miami Boat Show with the new 32-foot Victory catamaran. They spent nearly three hours talking about the boat, the construction and the history of the team. What appealed to Pugh was the “gull wing” bottom design that was different from other catamaran models on the market.

“The way our sponsons are designed, we’re running on just a few inches of surface touching the water, it’s basically running on two knives is the best way to describe it,” said Ricky Maldonado, a representative for the Victory Team. “You’re not just grabbing air on the tunnel, you are grabbing air all throughout the sponsons all the way to the back. It’s a racing design. It’s been proven in XCAT racing and Super Stock.”

Pugh and Matzke flew into Tampa to test drive the 32-foot catamaran and loved how the boat handled. Rather than buying the model he test drove, Pugh wanted to take a chance on the VTX 34 Cat that had just been built in Dubai. The boat had a 2-inch wider beam and wider tunnels.

“We bought the boat because we love the way it handles, we like the integrity of how its built and the reliability,” Pugh said. “We can go out and have fun with it and rely on it and know it’s a safe running boat.”

The Victory catamaran was equipped with Mercury Racing Verado 400R outboards and the power plants are being upgraded to the new Mercury Racing 450R outboards. Pugh, who owns Marine Hardware Inc., talked to a few companies to learn more about the reliability on the 400-hp outboard. “They all said (the engines) were bulletproof, nothing ever goes wrong,” he said.

With the Mercury Racing 400R outboards, the catamaran should have a top speed of 118 to 121 mph when fully dialed in, Ricky Maldonado said. Cruising at 4,000 rpm, the VTX 34 Cat runs in the high 70-mph range, he said.

Pugh anticipates he’ll run the catamaran in the 90-mph range, while Matzke plans to run it a few ticks slower. “It’s an awful lot of fun to drive,” Pugh said. “I don’t think you really need to run much over 100 mph. We certainly don’t have to go 145 mph or 150 mph.”

The cockpit is a traditional layout with two bucket seats up front with a center console for the controls, while the rear bench had three individual buckets. A large wraparound windshield protects the pilot and passengers from wind and spray.

The transom was covered with gray SeaDek nonskid and steps provided access to the water. Victory included a spacious stowage locker on the transom to stow lines and fenders. Three additional lockers were in the bow.

Although there is space on the transom for sterndrives, Maldonado said they are only building the 34-footer with outboards for now. The boat was painted and rigged in Dubai then shipped to the United States where it was delivered to Pugh and Matzke last summer at Lake of the Ozarks.

The VTX 34 Cat with twin Mercury Racing 400R engines retails for about $400,000 and includes a fairly custom paint job. “The ultimate Victory is a fully Victory-built boat, rigged at the factory, fine-tuned at the factory, props and set up,” Maldonado said.

Currently Victory is offering three models including the 27- and 34-footers as well as the 32 Race Cat, which will be only for racing. Victory is building a high-performance center-console boat that is expected to make its debut at the Dubai International Boat Show in March, Maldonado said.

Victory has signed dealers in Florida and California but will also sell factory-direct to customers. Maldonado said Victory wants to keep production low to maintain quality.

“We want to satisfy the customer more than the industry,” Maldonado said. “We want happy customers, people that really like and enjoy their boats, that use their boats and love their boats, and have nothing to say bad about them.”

Pugh plans to keep the VTX 34 Cat on the lift during the summer at their home on Mercer Island to go with the Donzi Sweet 16 that Matzke owns. The boat will go to warmer climates, such as Lake Havasu, Arizona, during the winter as they purchased a tilt trailer from MYCO.

“You know how short our boat seasoning is,” Matzke said. “It doesn’t freeze, it’s just miserable.”

Pugh, who built his first boat age 13, watched the industry moved from wood boats to fiberglass boat. Thanks to improving technology, the Victory catamaran is lighter, stronger and more efficient than catamarans built a decade ago.

“I’ve been able to enjoy and see how all the boats are built and I’ve enjoyed the technology,” Pugh said. “I’m more of a hands-on, what’s the guts of it like underneath. I’m not the fancy paint job guy.”