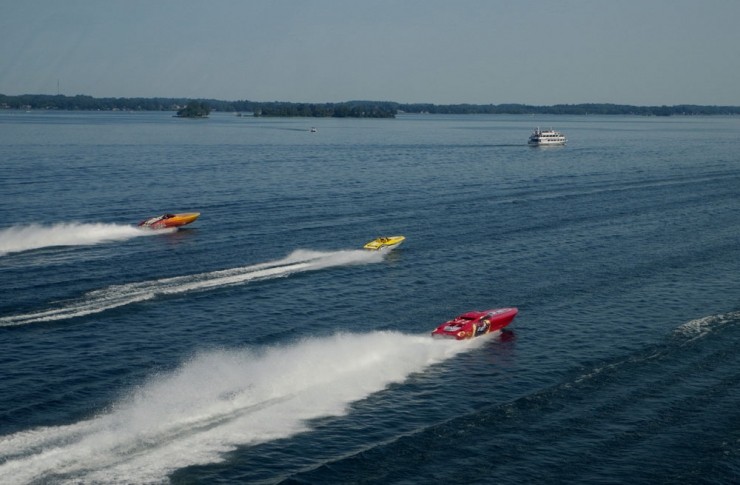 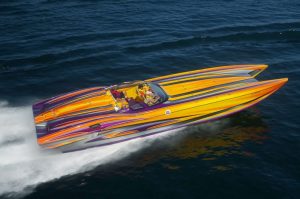 However, this is not just a poker run. It’s a massive festival hosted in conjunction with The City of Kingston and surrounding region that attracts people from across North America. It’s during this time that spectators arrange their summer vacation to capture all the action, while the go-fast crowd ardently fine tune their aquatic masterpieces to take part in one of the season’s most celebrated power event.

Hosting such an event isn’t easy. It takes months of planning, hours of meetings, and more than 80 local volunteers to host the thousands of spectators and all the performance boating crews with their exotic hardware.

Vendors, too, take full advantage of the exposure as boat displays, dealer and manufacturer exhibits, tourism bureaus, and high-performance and service dealers are common showcases every year.

To raise the excitement level even higher this year, we added a new concept to the poker run phenomenon – the on-site “Speed Zone Theatre” created in conjunction with the Ontario Ministry of Tourism and Culture that presented video highlights of past poker run events, related performance boating footage plus live streaming of the poker run for the spectators to witness on land. At times it was standing-room only as spectators watched all the action “live” in the 20 x 30-foot, 50-seat, air conditioned, tented viewing area.

What was even more exciting, and another new element was the awards ceremony held “under the stars” in Kingston’s Springer Market Square with the unveiling of the cards presented on a Jumbotron video screen. With the assistance of The City of Kingston, sponsors and the winning participants were projected larger-than-life. The entire concept was successful and raised the excitement level even higher! 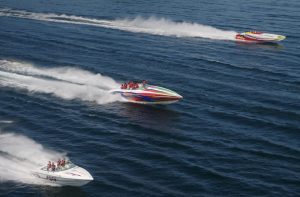 As usual, a flurried frenzy of excitement filled downtown Kingston, late Friday afternoon. One by one, performance enthusiasts pulled in from Massachusetts, Connecticut, New York, and various parts of Ontario and Quebec to kick-start the weekend. The annual street party, which is always popular, was highlighted by live music in the park, while all the exciting pubs and bistro-style restaurants had their doors wide-open ready to serve the willing crowd.

Filling the streets were players and spectators alike admiring the Poker Runs America 47’Fountain pace boat, Bill Tomlinson’s new “My Way,” and of course, the iconic Go Fast Energy Drink rig and trailer, owned by Patrick Higgins. While we thought Higgins’ closed canopied 42’ Outerlimits was impressive, the Go Fast rig and trailer is something to checkout. It took up nearly half the block and undoubtedly captured everyone’s attention as representatives spoke with spectators, promoting the Go Fast Energy Drink and merchandise. 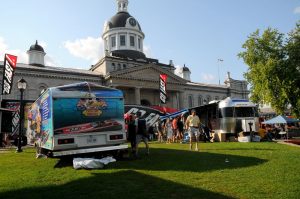 Also exhibiting at the street display was Danalevi Boats of Belchertown, MA, with the new Furnia 22 runabout, a stylish family  runabout with several features and benefits for recreational boaters. Just adjacent to the boat display was the Poker Runs America trailer, finalizing registration and selling merchandise. This year we had the excellent support from volunteers Jenny Omdal and Kyle Rose of The Canadian Diabetes Association who gave their time and efforts to ensured everything ran smoothly at the site.

Action also continued down at the slips as performance boats of various makes, models and lengths were cradled in their slips. Crowds lined the docks to admire the many steeds including Johnny O’loughlin’s 48 MTI “Terminator”, Edward Como’s turbine-powered 50’ Airborne “Comotose,” Robert Tavano’s 42’ Fountain, Marc and Micheline’s 42’ MTI, “Xclusive,” and Doug Bryant’s 40’ Nor-Tech Roadster, to name but a few. As our runs are also known for attracting owners of models in the 24 to 28 foot range, it was great to see Matthew Cardinale in his 27’ Activator, Chris Lamer in his 28’ Donzi, Marc Menard in his 28’ Scarab, and Jason Steacy in his 25’ Baja.

As the evening progressed, the players made their way to the Poker Run Meet and Greet Party at the Blu Martini and Grill (formerly Zappa’s Bar) where many of the participants enjoyed cocktails and complementary hor d’oeuvres. As many called it an early night, others enjoyed the bustling downtown centre of Kingston, mingling at the various pubs and restaurants.

On Saturday, the day of the run, the poker runners reconvened for the mandatory driver’s meeting at Kingston’s City Hall – outlining the rules and regulations of the run (and where they picked up Card 1) – before making it out to the water for “Gentleman Start Your Engines.”
Countless of spectators lined the shoreline of Confederation Basin to witness all the action. By 10:45, all boats were “ok to go” and as the green flag dropped, the group punched the throttles and blasted their way to Brockville to draw Card 2 and enjoy lunch. 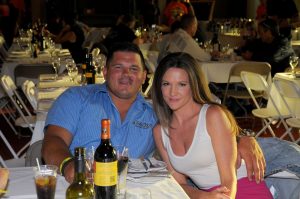 We once again hosted lunch on the scenic grounds of Hardy Park for the annual Brockville Ribfest. Always a main highlight on this run, Brockville attracts thousands of spectators every year to catch all the action. Following excellent ribs from award winning “ribbers”, the players mingled along the slips, caught some rays, and prepared for the next leg of the run.

This year, after taking off to play Card 3 in Prescott from a card boat, the group made the return trip back through Brockville at full throttle, dazzling the crowds once again before returning to Kingston and the unveiling of the cards at the awards banquet.

After many years of coming to Kingston for event, the city rolled out its red carpet and allowed us to use the main banquet facility in Kingston’s City Hall, which served as an excellent venue with its sheer ambience. A full bar and full course dinner consisting of steak and lobster was the perfect way to end a great day on the water. 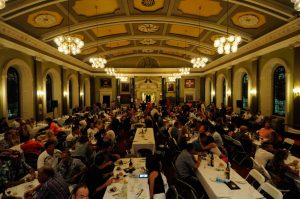 Following dinner, participants congregated to Kingston’s Springer Market Square “under the stars” for the unveiling of the cards. Complete with the Jumbotron screen provided by the City of Kingston, the winners were announced larger than life. 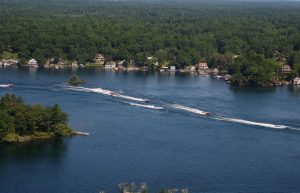 Presented by Dave Kirkland – with the assistance of Tanya Angove of Belleville, ON. to unveil of the cards – it was our delight to see first-time poker runners Chris and Jennie Grant of Toronto, ON, Canada take first place with a solid straight, running their new 42’ Fountain.

In second place was long-time poker runner Benny D’Angelo of St. Remi, QC, with a Two Pair (KK44) in his 38’ Cigarette “Houdini” while in third with another two pair (9922) were Brian McIntyre and crew of Kingston, ON, in his 38’ Fountain, “Crack of Noon.”
What was also different for this year was the special drawing of three extra winners, which included Jennifer and Rejean Doucet of Carlsbad Springs, ON, aboard their stylish Outerlimits who won fourth, Johnny O’Loughlin, of Center Moriches, NY. in his 48 MTI “Terminator” who won fifth, and Robert Raposo of Loyalist, ON, in his 33’ Scarab, who took sixth.

Event organizers came to the conclusion that Minesing, ON-resident Mathew Dean and crew of “Total Chaos III” on his 35 Motion, were the recipients of the Best Dressed Crew Award with their excellent team shirts. While Johhny O’Loughlin and his 48 MTI catamaran “Terminator” was the unanimous choice for the Best Graphics Award with his stylish and sophisticated paint scheme. Taking the Most Exotic Engine Compartment award was Chris Ridabock of Niagara-on-the-Lake, ON, with his 40’ Profile that concealed twin 750 Livernois Motorsports powerhouses. PRA