When Poker Runs America first made the voyage up to Northern Ontario in 2015, they were unsure of what they would find.  Bordering on the U.S. and Canadian border, the town of Sault Ste. Marie, Ontario, is not one you would typically mention in conversations about great boating destinations.

However, as soon as the group of VIP Poker Runners fired up their engines for the inaugural run and made their way out onto the emerald green waters of the St. Mary’s River, it became immediately apparent why Sault Ste. Marie’s town motto is “Naturally Gifted.”  The water was framed with some of the most luscious trees and staggering cliffs you could imagine.  Better yet, because this was such a hidden gem, traffic on the water was minimal, providing an open playground for the poker runners.  The Algoma Region truly is a boater’s paradise.

With a great first impression fresh in their minds, Poker Runs America decided they absolutely had to return to Sault Ste. Marie, Ontario.  Three years later and the city of Sault Ste. Marie and the Algoma Region have yet to provide anything but an exemplary experience.

It all began Friday, as the boats began arriving in Sault Ste. Marie. Much like in previous years, Poker Runs America was given use of the Station Mall Parking Lot. The public greatly enjoyed this, as they were able to get up-close and personal with the boats, checking out their props, drive shafts and motors.

This year, the theme of the weekend was “Mardi Gras.” Everywhere you looked you saw brightly colored beads, decorations and poker runners dressed to the nines in their Mardi Gras inspired garb. In addition to this, the poker runners partook in a “Parade of Power” on Friday.  Led by the Poker Runs America Safety Boat, a 32’ Sunsation Center Console, the boats paraded from the Station Mall parking lot to the launch ramp at the Bellevue Marina.

The convoy of boats lined up at the launch ramp, itching to get into the water and fire up their motors, was a spectacle to behold.  The crowd that had gathered at the launch ramp didn’t seem to mind the unseasonably brisk temperatures and were thrilled to hear the poker run boats roar to life.  After launching, the crowd heard the boats throttle up and make their way to the Roberta Bondar Marina, home base for the weekend.

The marina and the pavilion surrounding it is named after famous Canadian Astronaut, Roberta Bondar, who was Canada’s first female astronaut and the first neurologist in space.  Bondar served as NASA’s head of space medicine for more than a decade. The boaters whose home dock is the Bondar Marina graciously gave up their slips to accommodate the poker run boats, Poker Runs America cannot thank them enough for their cooperation.

With Sault Ste. Marie being a border town, poker runners from all over North America show up for the poker run.  This year, Richard Gerth brought his 42’ Outerlimits all the way from Petersburg, Ontario.  Poker Runs America was thrilled to see the Rapid Rabbit himself, Lawrence Coelho make the trek from Tulare, California, for the third time.  Bill and Monica Reiffer with their 43’ Checkmate, Taking Liberty were in attendance.  Poker Runs America was thrilled to see newcomers such as Josh Gasta in his 33’ Scarab White Knuckle, from Saginaw, MI, and Brian Gallagher, a Sault Ste. Marie, ON local in his 42’ Baja Outlaw, Potluck.  Some entrants from prior years upgraded to some serious power in 2018; Andy Driver’s newest iteration of Designated Driver, a 42’ Outerlimits, and Ron Meyering’s brand new and stunning 478 Skater.

The Northern Superior Brewery opened up their tap room on Friday evening for the marshal boat meeting.  Marshal boats are absolutely essential to the success of any Poker Run, and Poker Runs America is lucky to have such a loyal team of participants in Sault Ste. Marie who have come out for three years straight to ensure everything goes according to plan, and everyone is safe.  Northern Superior supplied the Marshal boat crews with an adult beverage or two while the logistics of everyone’s posts were figured out.  Pints drank and posts assigned, the marshal boat crew were ready to keep the poker runners safe the following day. 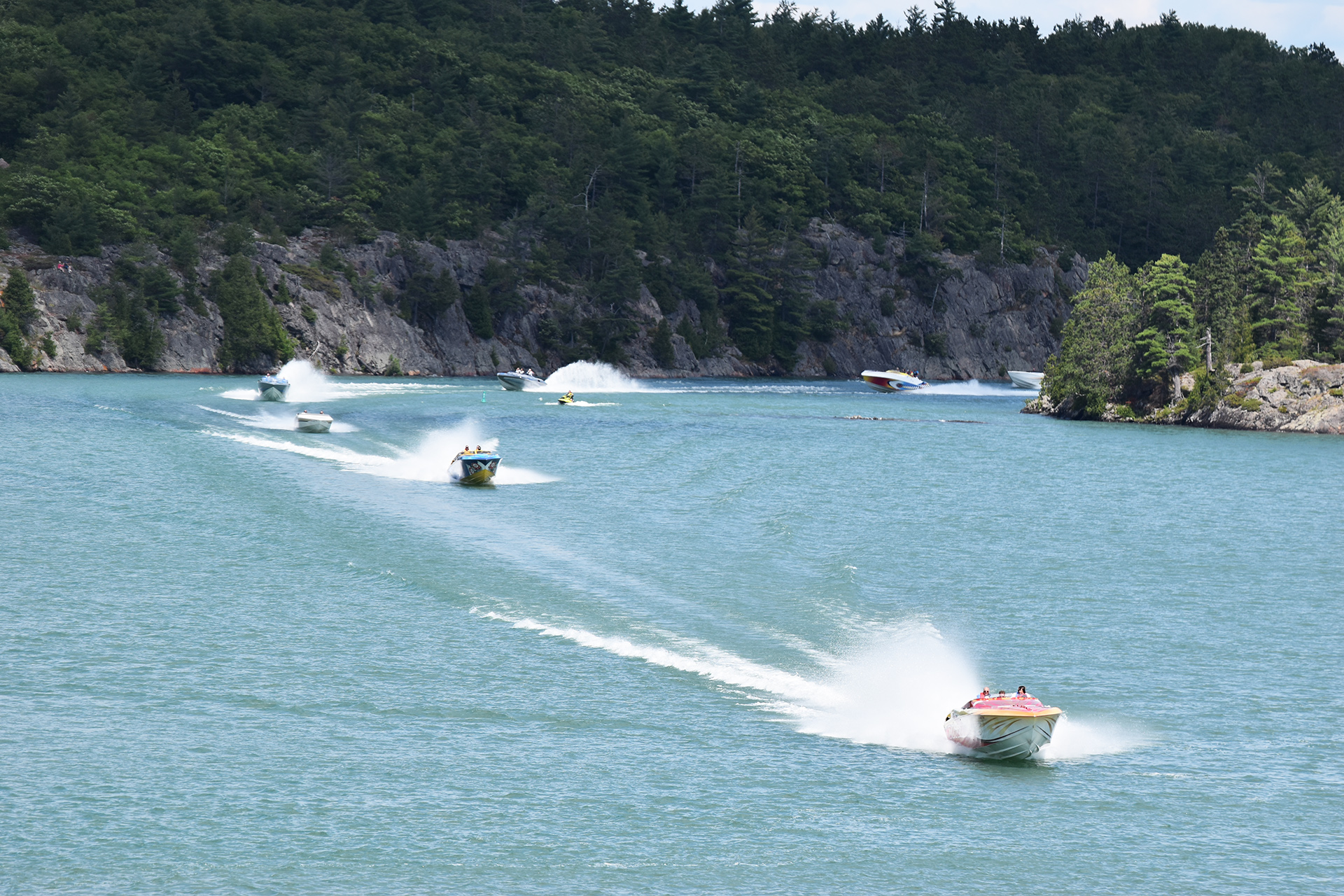 On Friday, the Poker Runners were treated a welcome party at the Delta Hotel.  Originally planned to be hosted at the Fluid Patio Boardwalk and Grille, which provides a beautiful view of the Bondar Pavilion and the St. Mary’s River, the weather did not cooperate and the festivities had to be moved inside.  The poor weather outside didn’t dampen the spirits of the poker runners inside though.  The room in the Delta was abuzz with friends catching up, reminiscing of good times, looking forward and studying the route for the run the following morning.

Despite the inclement weather Friday, Saturday morning greeted the poker runners with nothing but sunshine and calm waters.  At the driver’s meeting, the local police force and coast guard briefed the participants on the route, noting that since the run travelled along a shipping route, there was a chance of encountering a freighter.  Though the coast guard assured the participants it was only a 600 ft. ship, not one of the big ones.

The runners made their way to the Bondar Marina and were greeted by hundreds of spectators lining the marina and the walkway in the park. In order to give the spectators that came to watch the poker run a proper show, Poker Runs America slightly modified the start of the run.

Instead of simply milling out of the Marina and then taking off in a mass start, the poker runners would exit the marina and head east, congregating in the Canadian locks.

Once organized, the poker runners departed the locks in two-by-two formation, roaring past the crowds at full throttle, allowing the crowds to feel the rumble in their chest and catch a slight spray from the boat’s rooster tails.

Poker Runs America received special permission for this from the Coast Guard, and couldn’t be more appreciative, this starting position was the ideal spot to showcase the power that these water-bred steeds possess to the fans who came out to see the show.

From there, the Poker Runners set off in pursuit of their first card stop, a card boat at the St. Joseph Island Bridge.  This allowed the poker runners to collect their second card of the day and admire the stunning scenery this boating paradise has to offer.  Around the St. Joseph’s Island Bridge is nothing but lush green trees and blue skies. 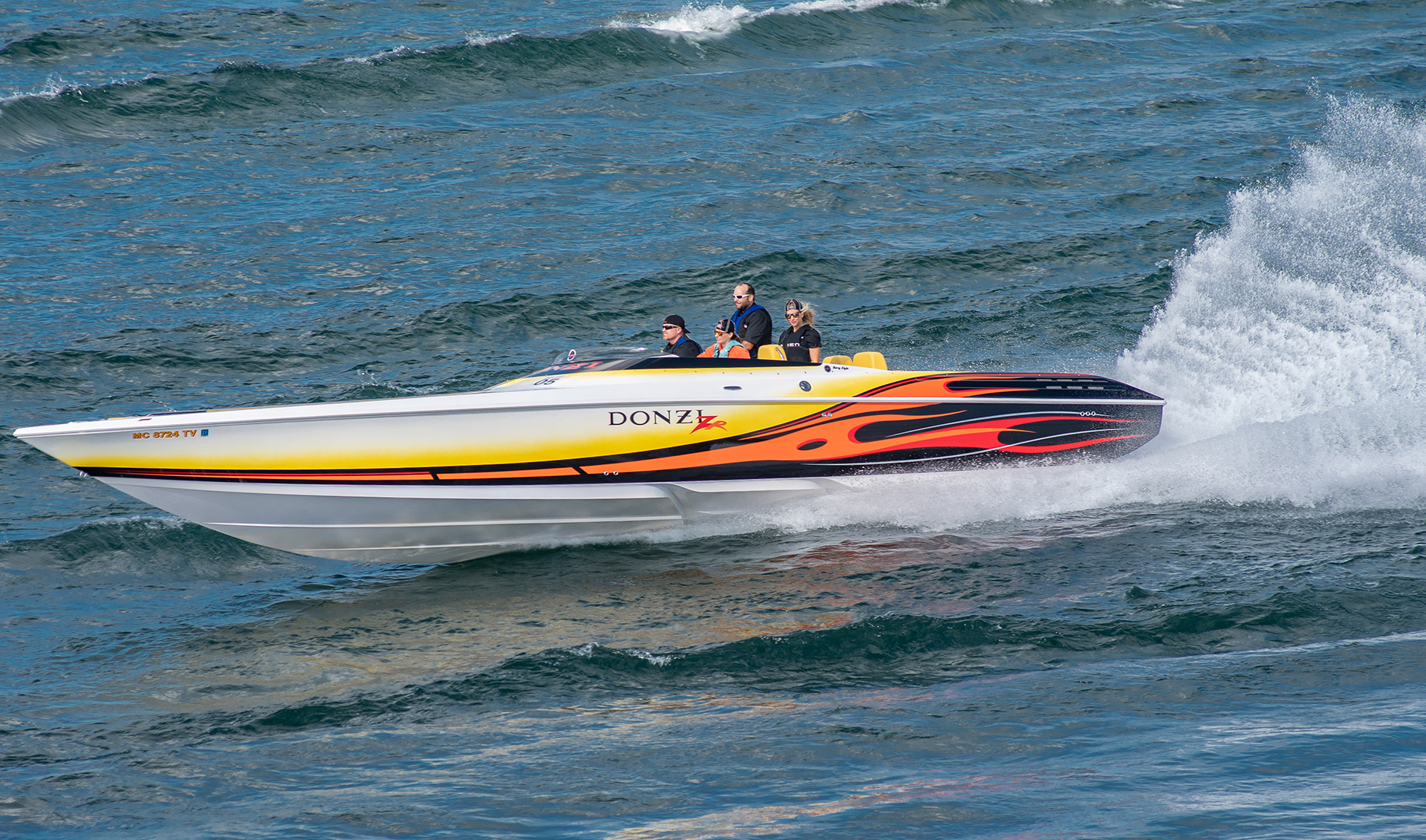 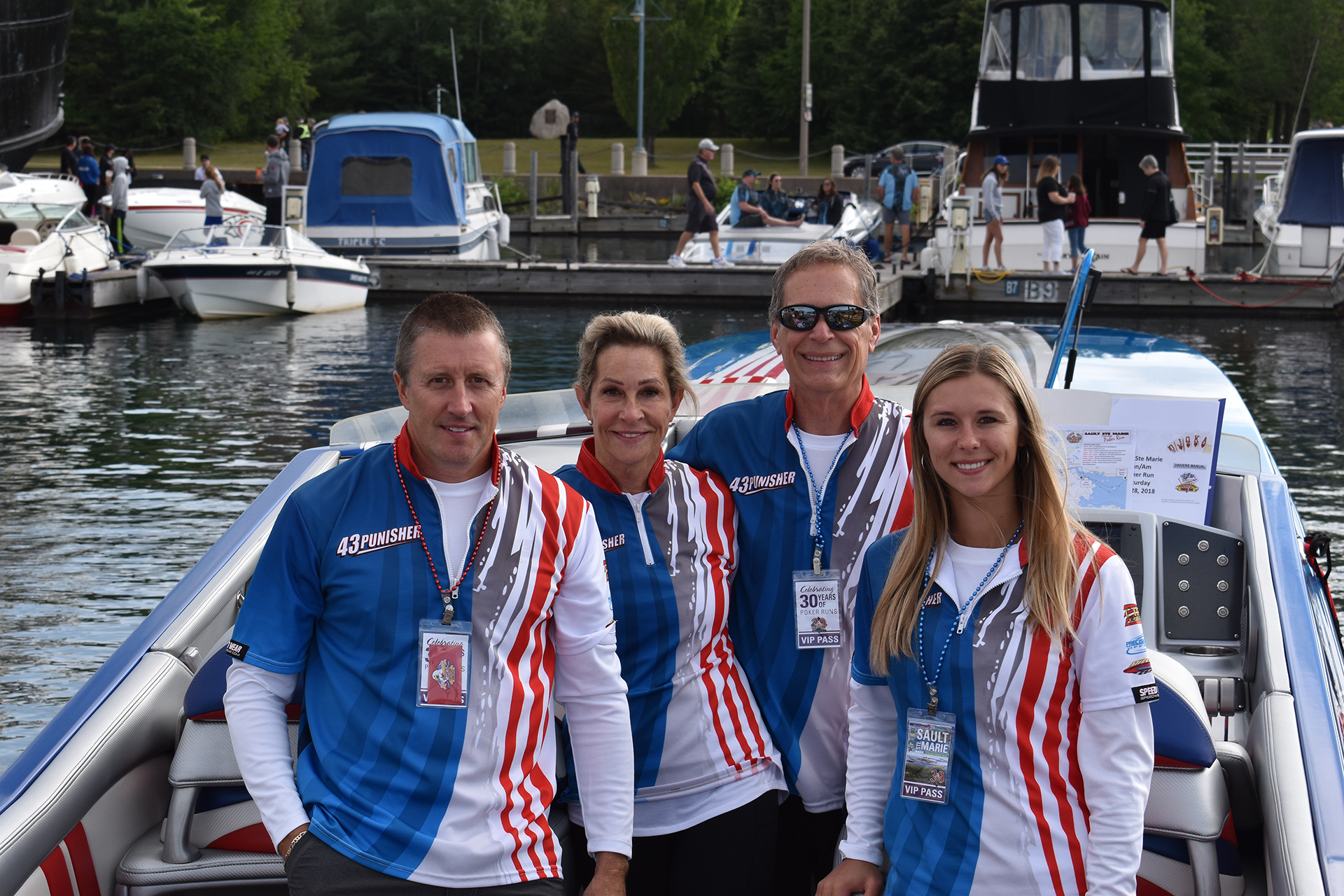 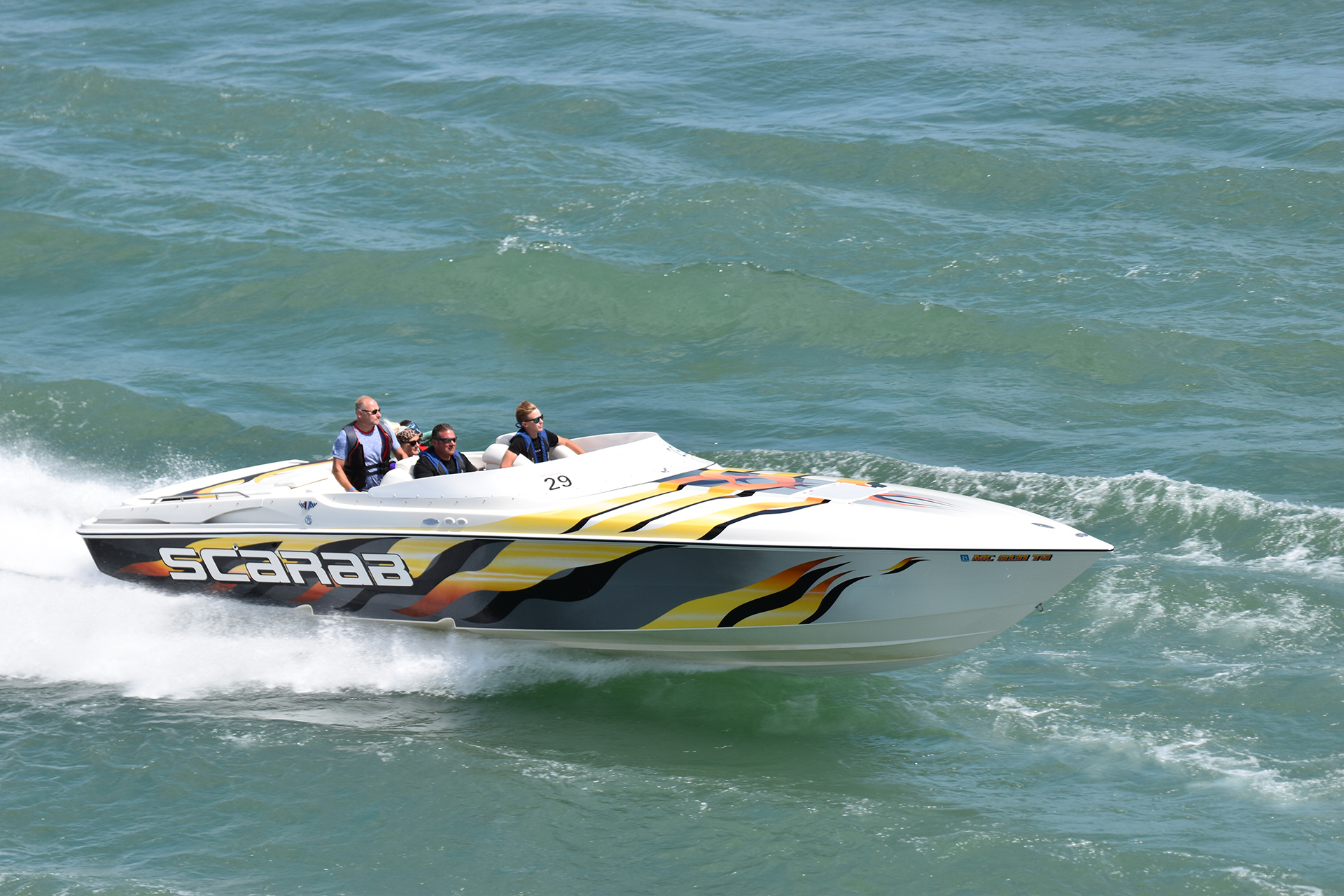 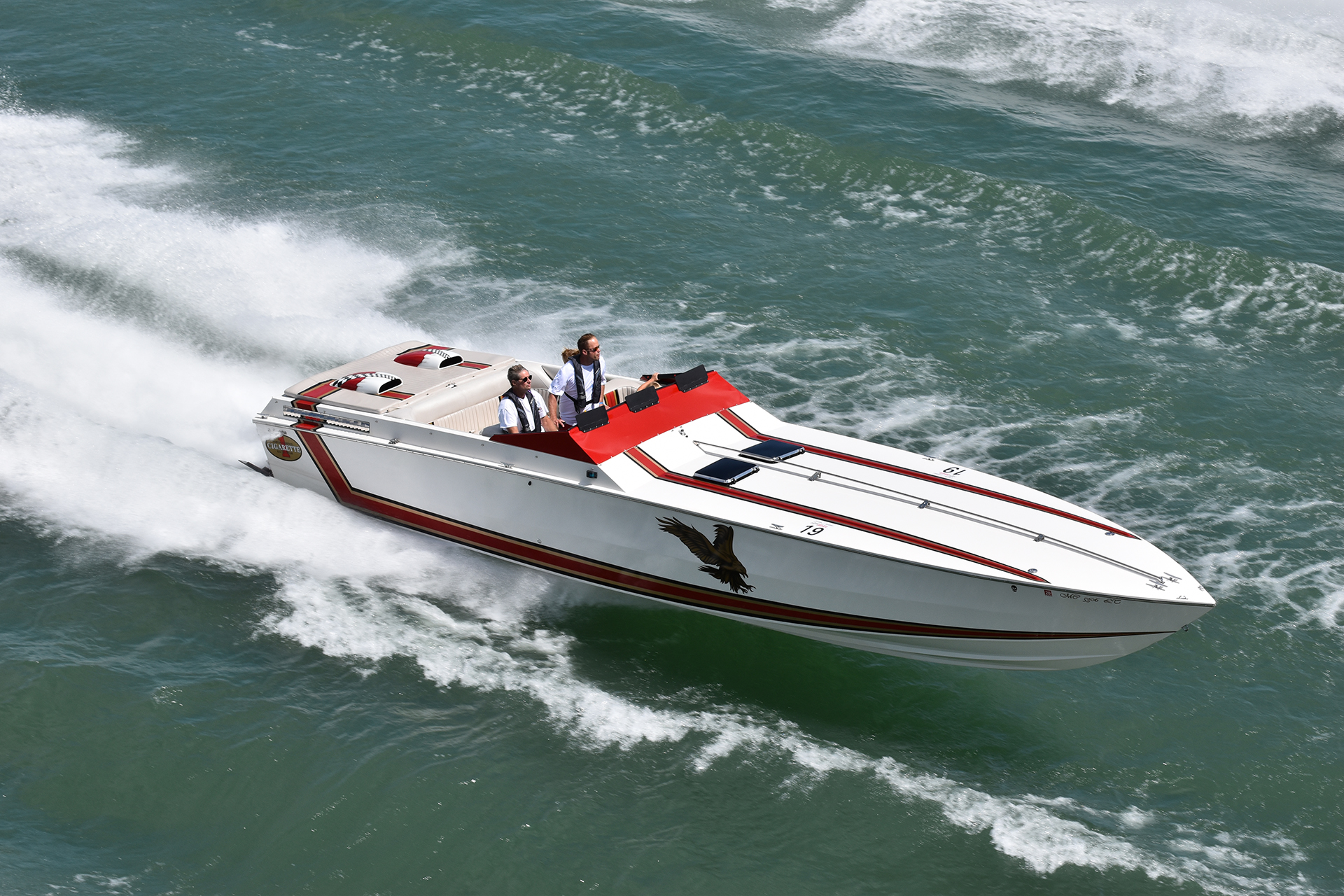 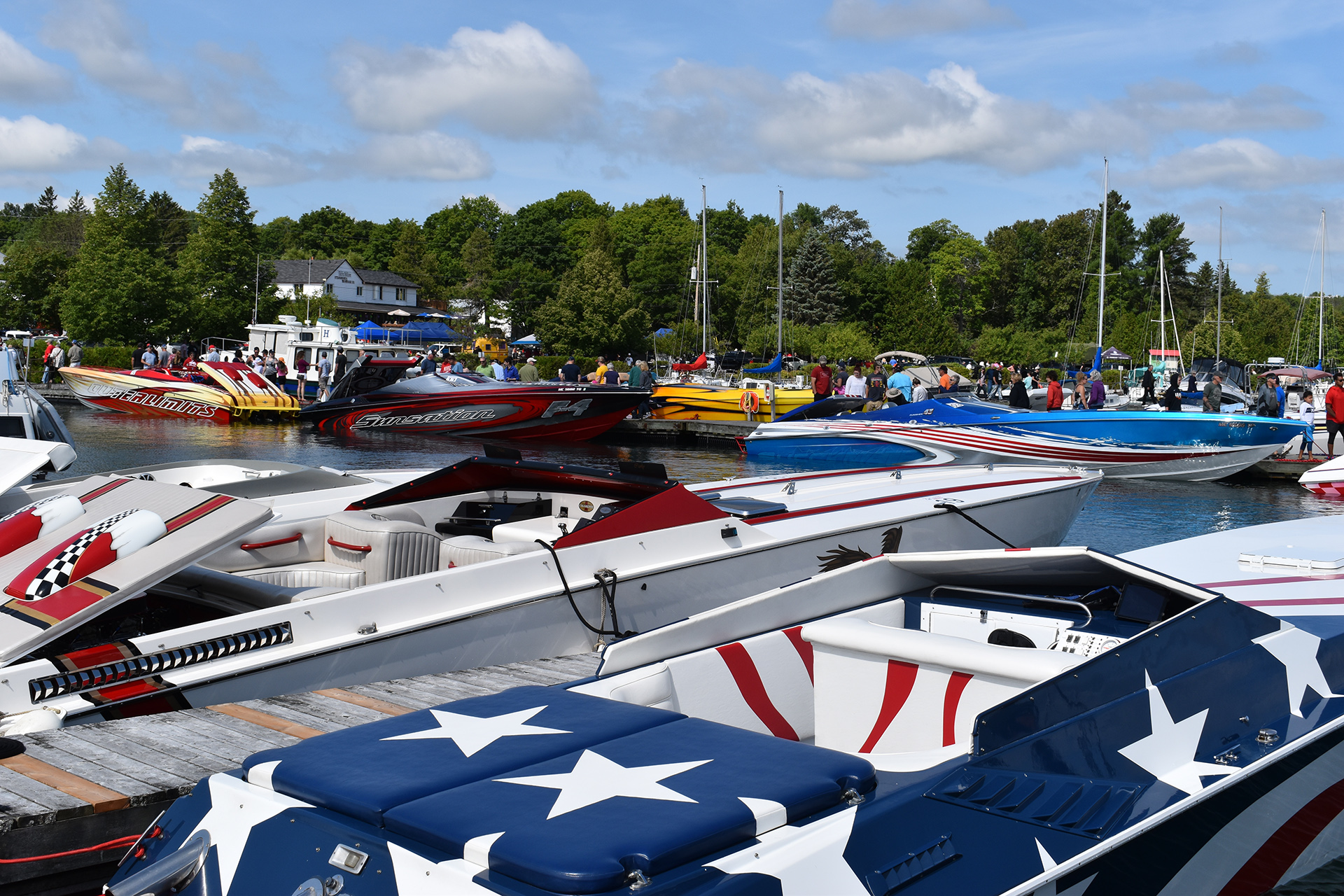 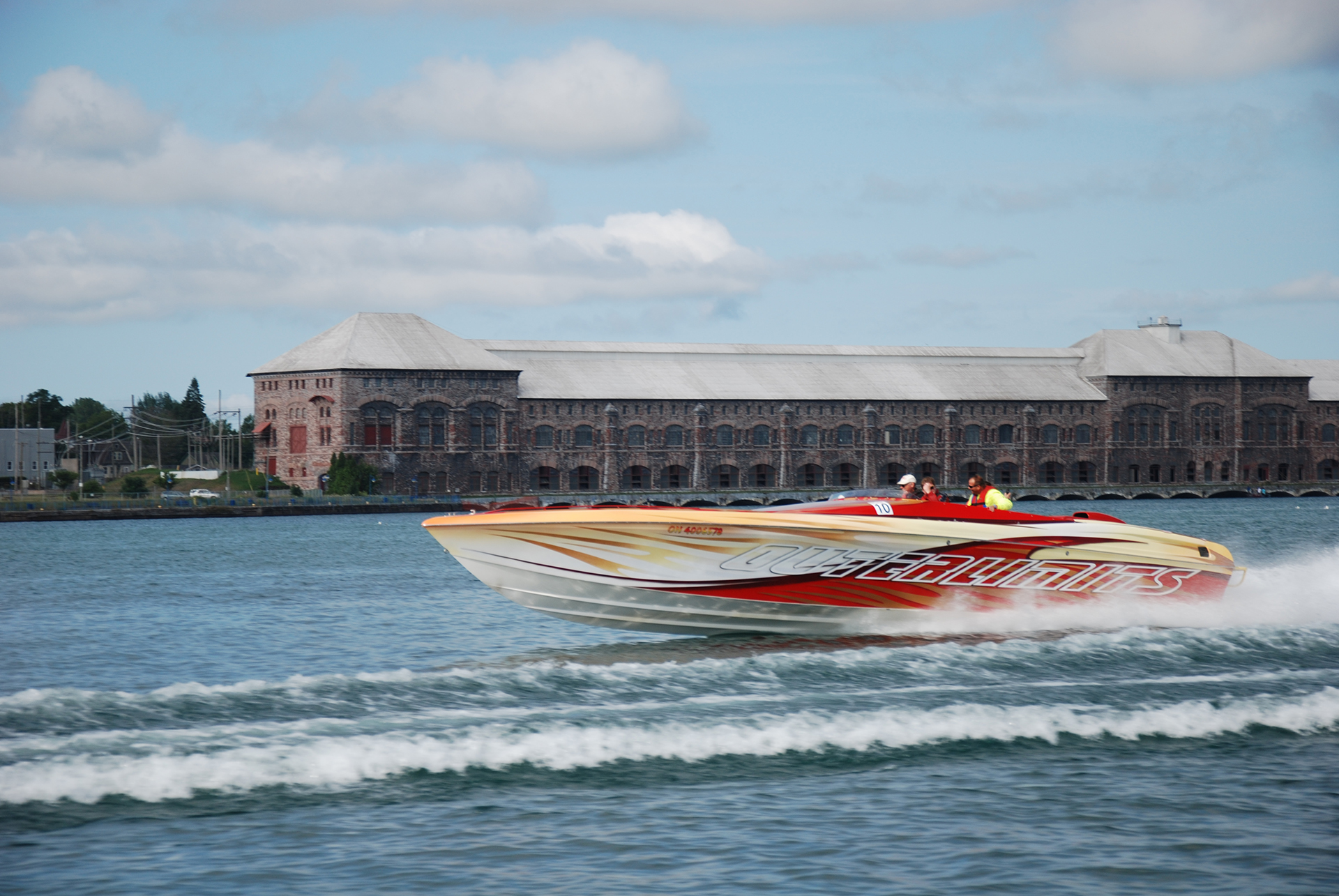 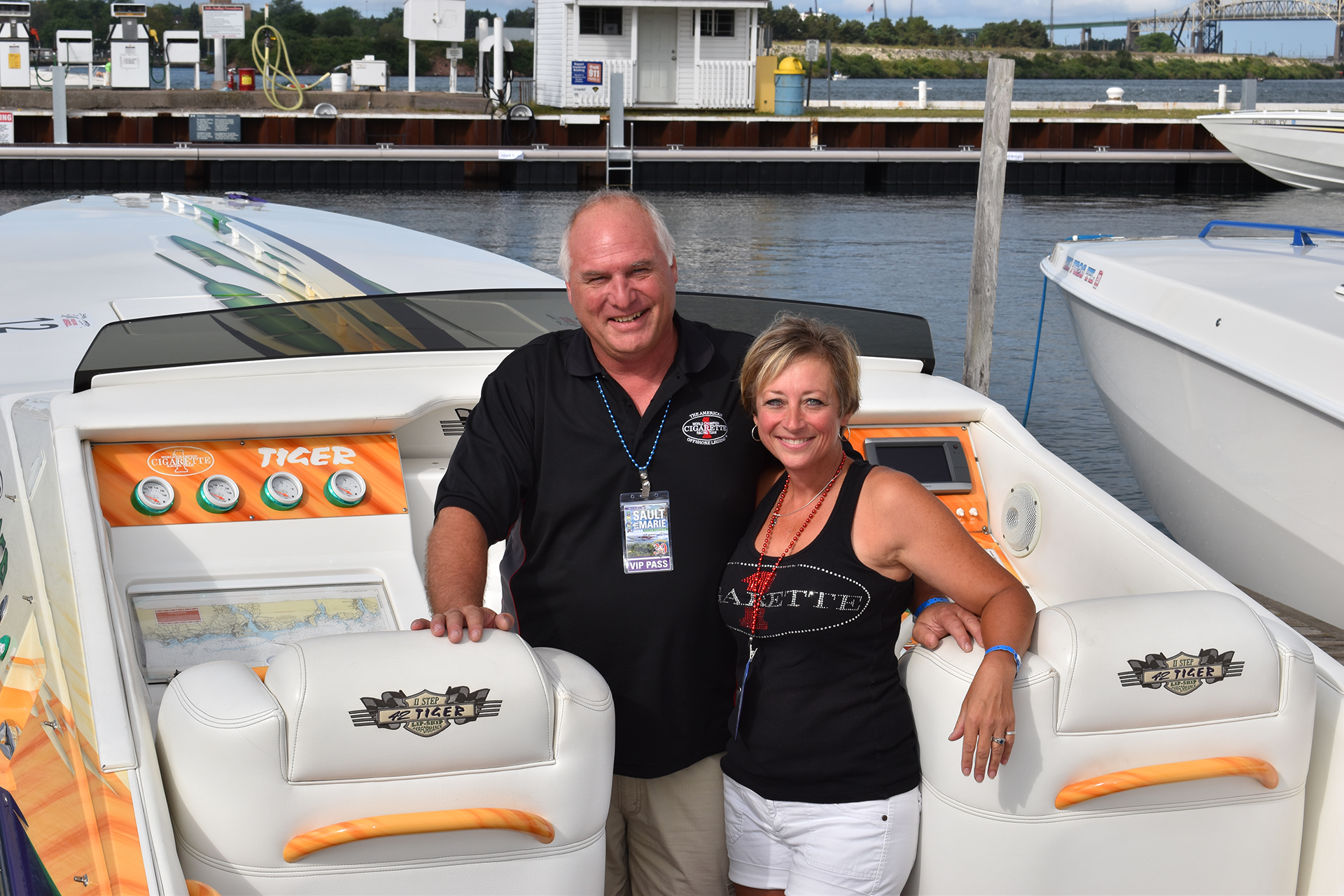 Lunch at the Tilt’n Hilton

Card in hand, the run set off towards Hilton Beach, the venue for the lunch stop.  Upon arriving at the Hilton Beach Marina, the poker runners found the party was already underway. Hundreds of classic cars had made their way to the town for the 18th Annual Hilton Beach Classic Car Show.  It was a celebration of speed, with boats and cars brought together for the afternoon.  Live music was being provided by the appropriately named, “Flathead Ford,” while a waterfront BBQ was underway as well.

A Brief Stop in Thessalon

With lunch finished, the poker runners made their way all the way out to Thessalon.  The poker runners were greeted here by a large crowd, all straining their necks to catch a glimpse of the boats.  Thessalon has a population of just 1,279, meaning most of the boats rolling in to collect their cards had more horsepower than there are residents.  Cards were handed out by a local resident who brought his personal crane out onto the dock, delivering cards to the poker runners from the bucket of the crane with a large staff.

After receiving the crane-card at Thessalon, the poker runners began the voyage back to the Bondar Marina, with an optional open-water run around serpent island, where runners could pin their throttles to the dash and really unleash all their horsepower.

Then, the runners stopped at Richard’s Landing Marina.  Located on St. Joseph Island, the municipal marina is known by the red and white lighthouse, located at the end of the main street. Located at the marina is a restaurant with a patio that sits right on the water, a great place to view the poker run boats. The water always seems to be extra green surrounding Richard’s Landing.

From there, the runners made the voyage back to Sault Ste. Marie, docking at the Bondar Marina.  Boats tied up for the day, it was time for some post-run relaxation and beverages in the warm July sun with the gorgeous Algoma Region providing a backdrop.

Dining at the Busplane Heritage Centre

For the third year in a row, the Bushplane Heritage Centre was chosen as the venue for the dinner and awards ceremony.  With vintage aircraft surrounding the dining area and the bay doors open, the ambiance provided by the Heritage Centre is what keeps Poker Runs America coming back.  Well, that alongside the gourmet feast they continue to serve!   The steak, shrimp and delectable dessert, perfectly paired with Sandbanks wine was a fitting meal for the VIP participants of the poker run.

Much like last year, we put the power in the hands of the people, giving those thousands of people who were straining their necks to catch a glimpse of the boats, a chance to vote for their favourites in the People’s Choice Awards.

Ron Meyering from Holland, MI brought his brand new 478 Skater to the run, and it should serve as no surprise that this lime green, blue and silver beast took home the award for Best Graphics.  In his vintage 38’ Cigarette, Rick Van De Burg took home Best Engines, the sound of this boat was simply unrivaled by any of the boats, produce a low, meaty growl at idle. Best Dressed Crew went to Doug Huizenga and his crew in his 40’ Hustler, Faster Daddy, who really got into the Mardi Gras Spirit and Best Rig went to Michael Bareman for the rig that pulls his 42’ Outerlimits, Fast Break.

Following the People’s Choice Awards it was time for the main event, the playing of the cards.  Participants and past winners watched feverishly as the hands were unveiled.  Once the hands had been revealed and the cards played, Matt Soper, with his 38’ Cigarette Top Gun Old School II, had a QQ1096 hand, netting him third place.  Second place went to Michael Baremen with QQ33A and the big winner of the weekend was Steven Rescorla in his 36’ Apache, Blue Moon with a QQ7710 hand.

As always, Poker Runs America continued their longstanding tradition of hosting a “Ride of a Lifetime” on a poker run boat on Sunday, with proceeds going to charity.  All proceeds from Sunday’s rides went to the Big Brothers, Big Sisters Charity of Sault Ste. Marie. While both the 47’ Fountain and 32’ Sunsation of Poker Runs America gave rides, special thanks must be given to the group of poker runners who volunteered their time on Sunday giving rides to charity.

Once again Brian Petingalo volunteered his time to give rides for charity, as did Bill and Monica Reiffer in their Checkmate, Taking Liberty. Newcomer Dave Dickman and his wife Denise also volunteered their time, giving rides in their 42’ Cigarette Tiger Misguided. Poker Runs America wants to extend special thanks to this group of poker runners who volunteered their time for a good cause. 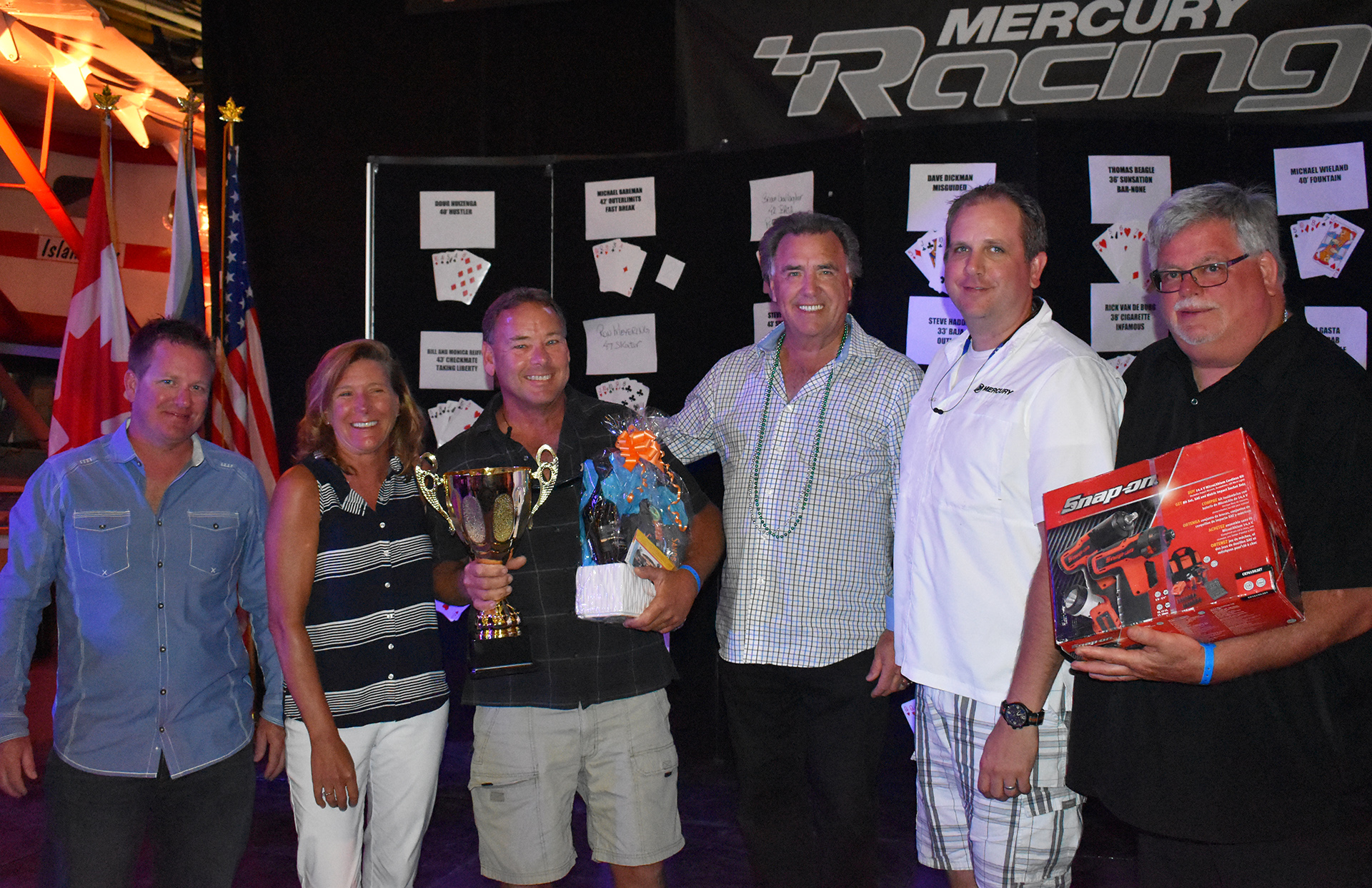 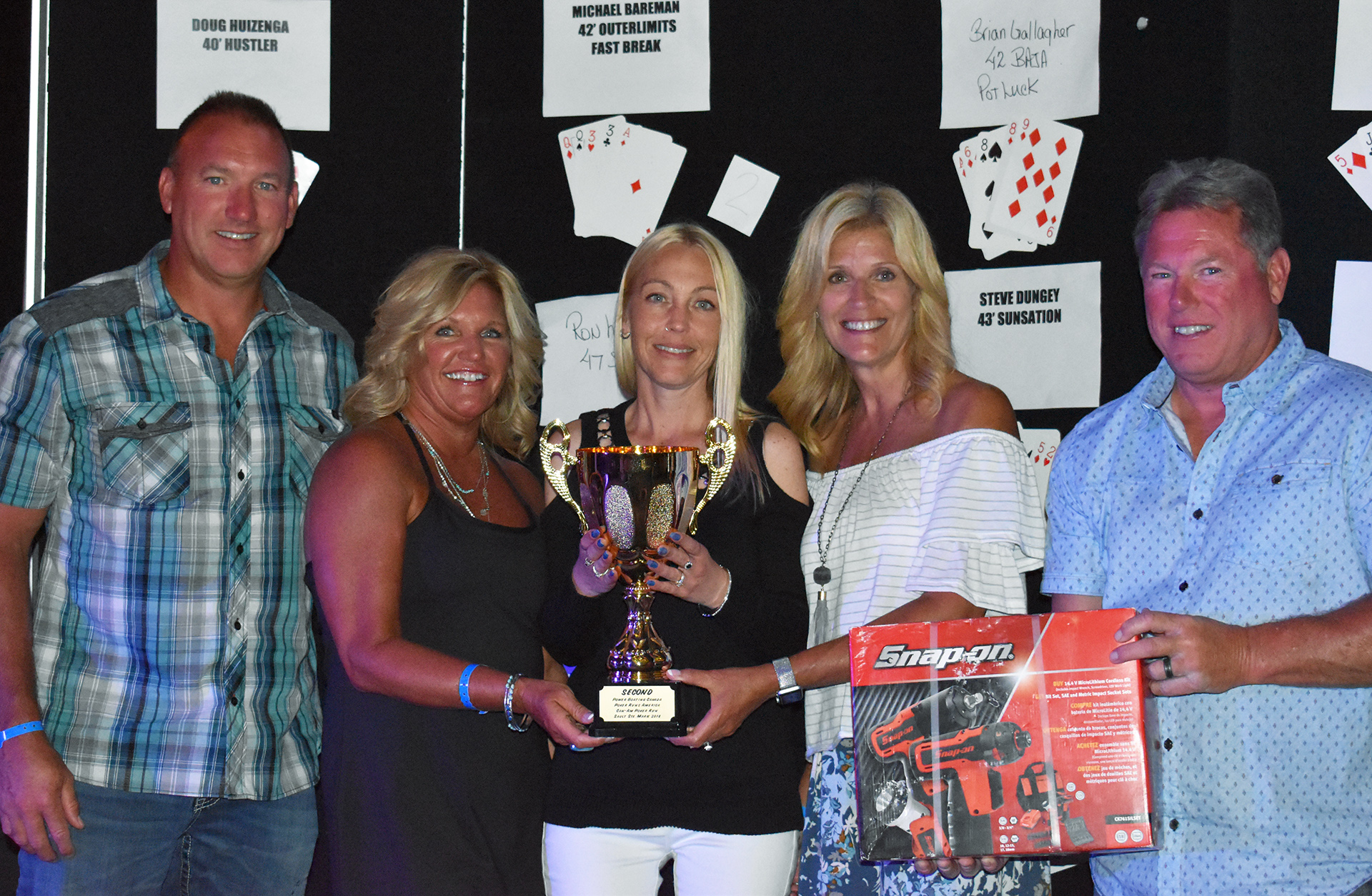 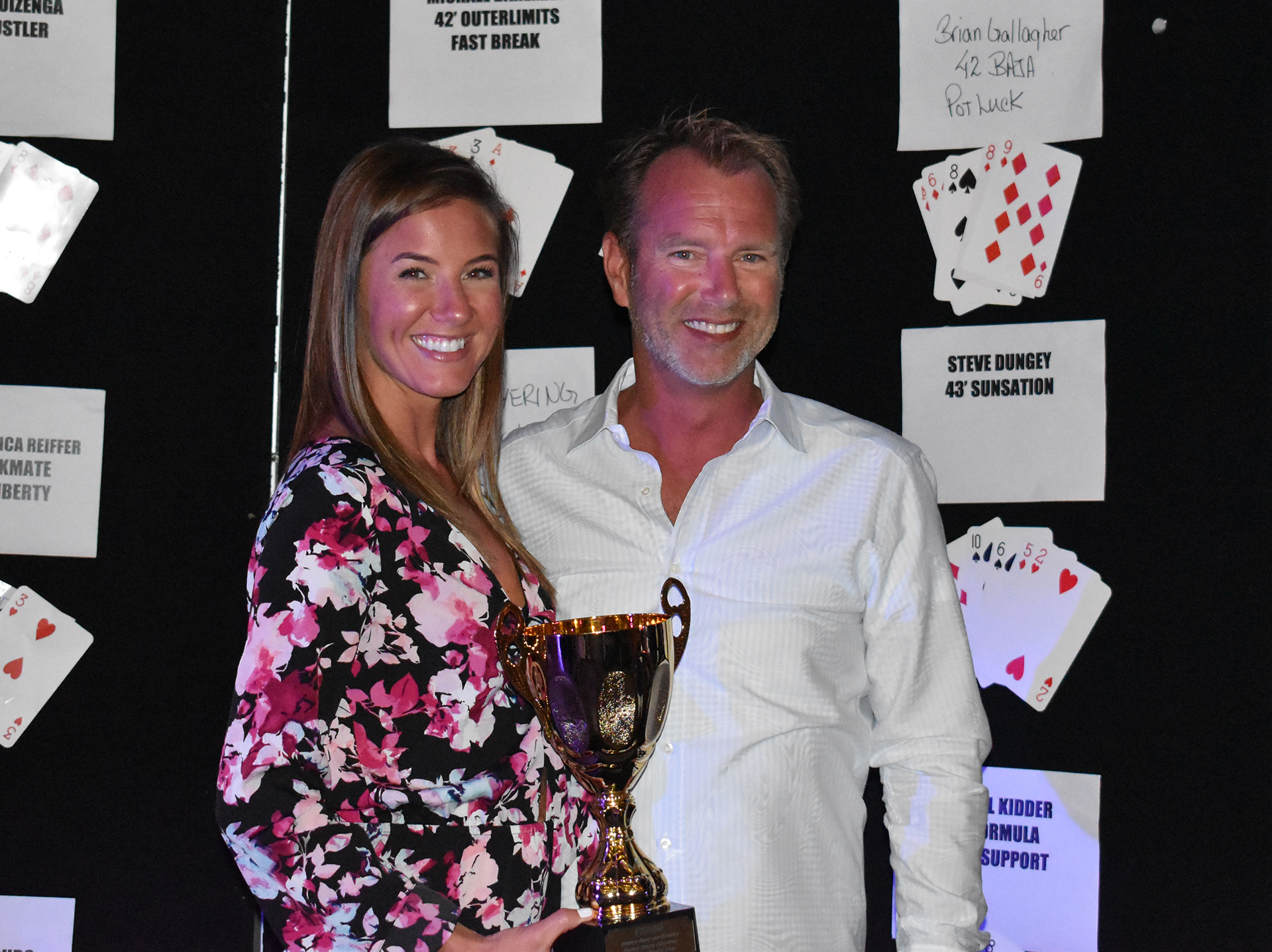 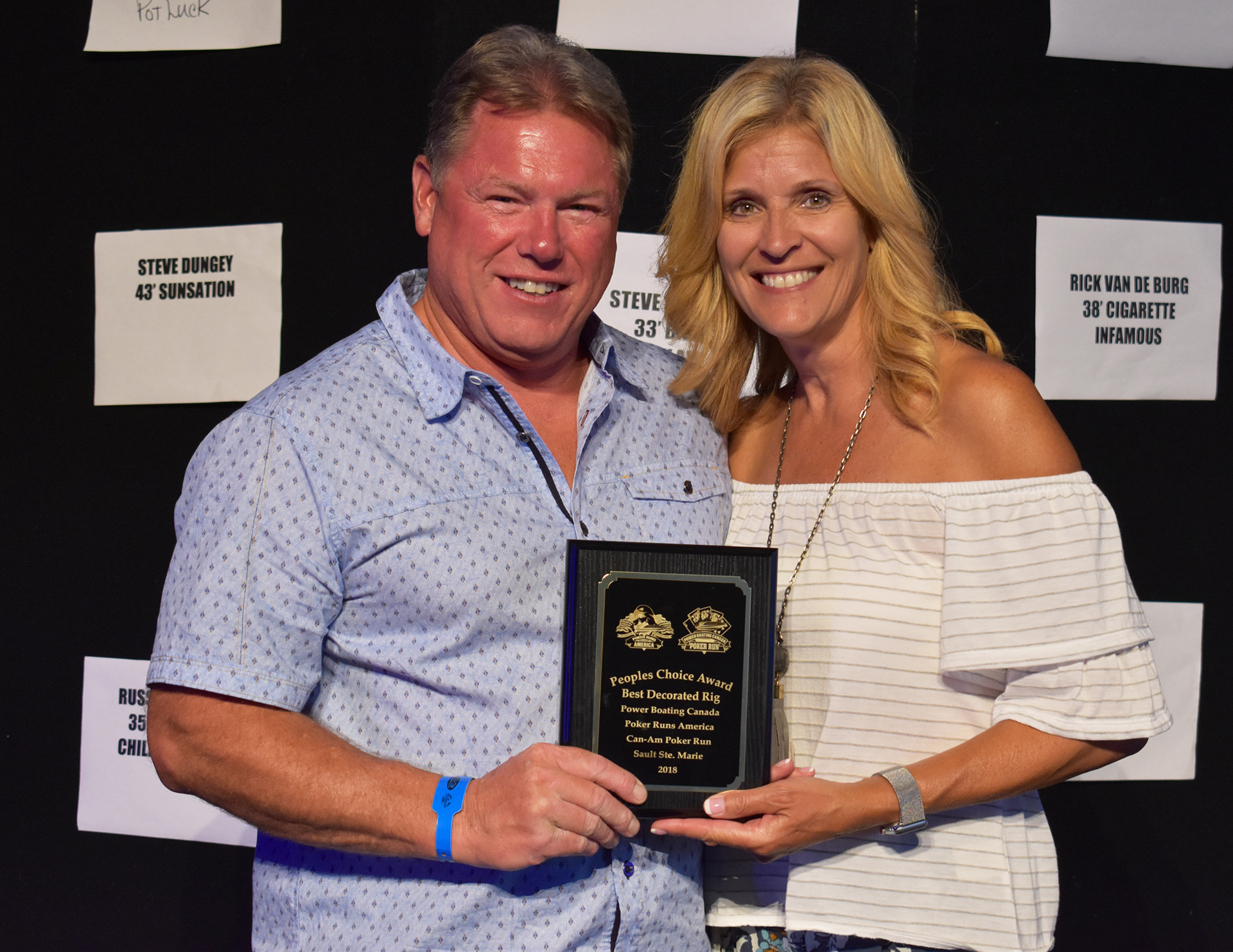 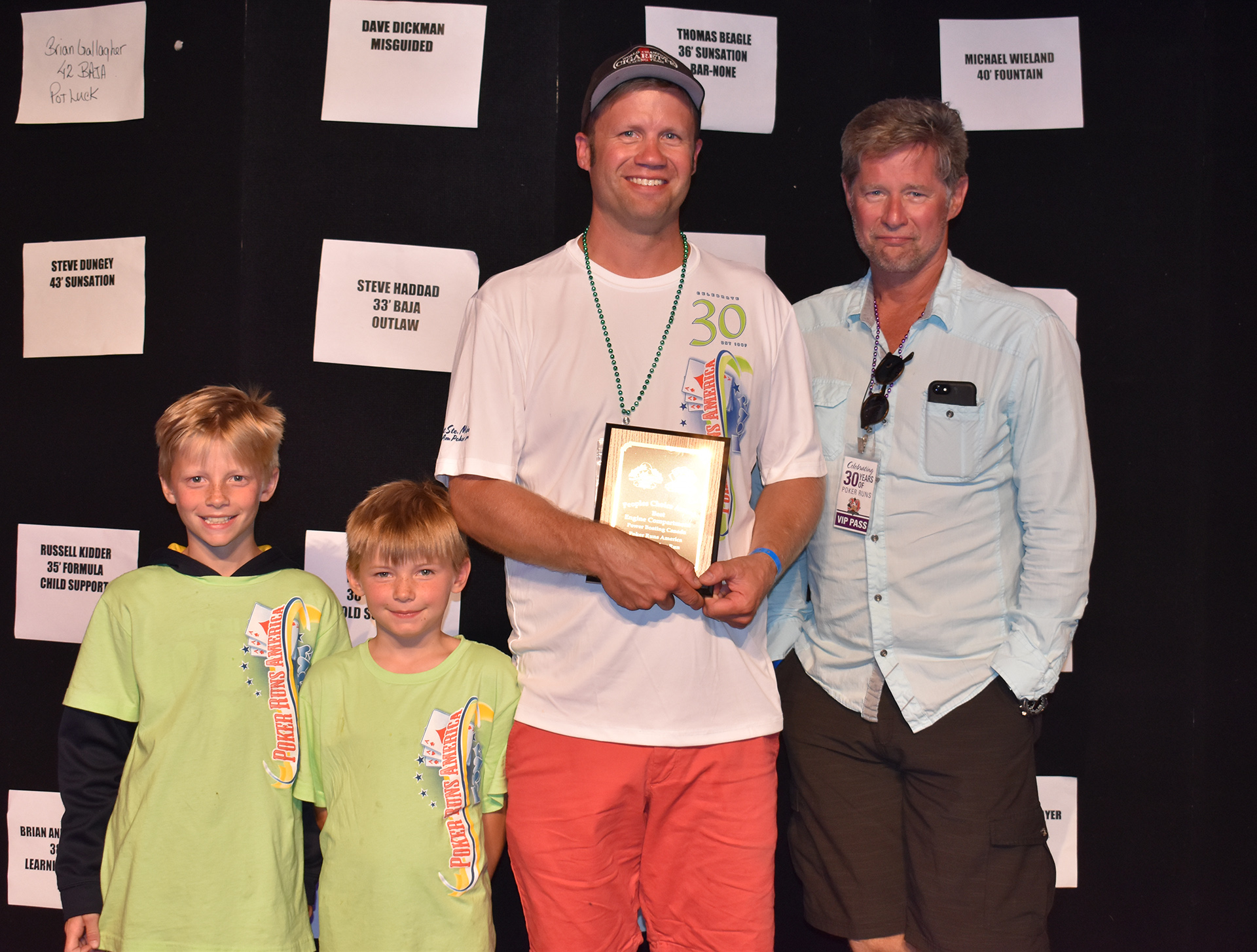 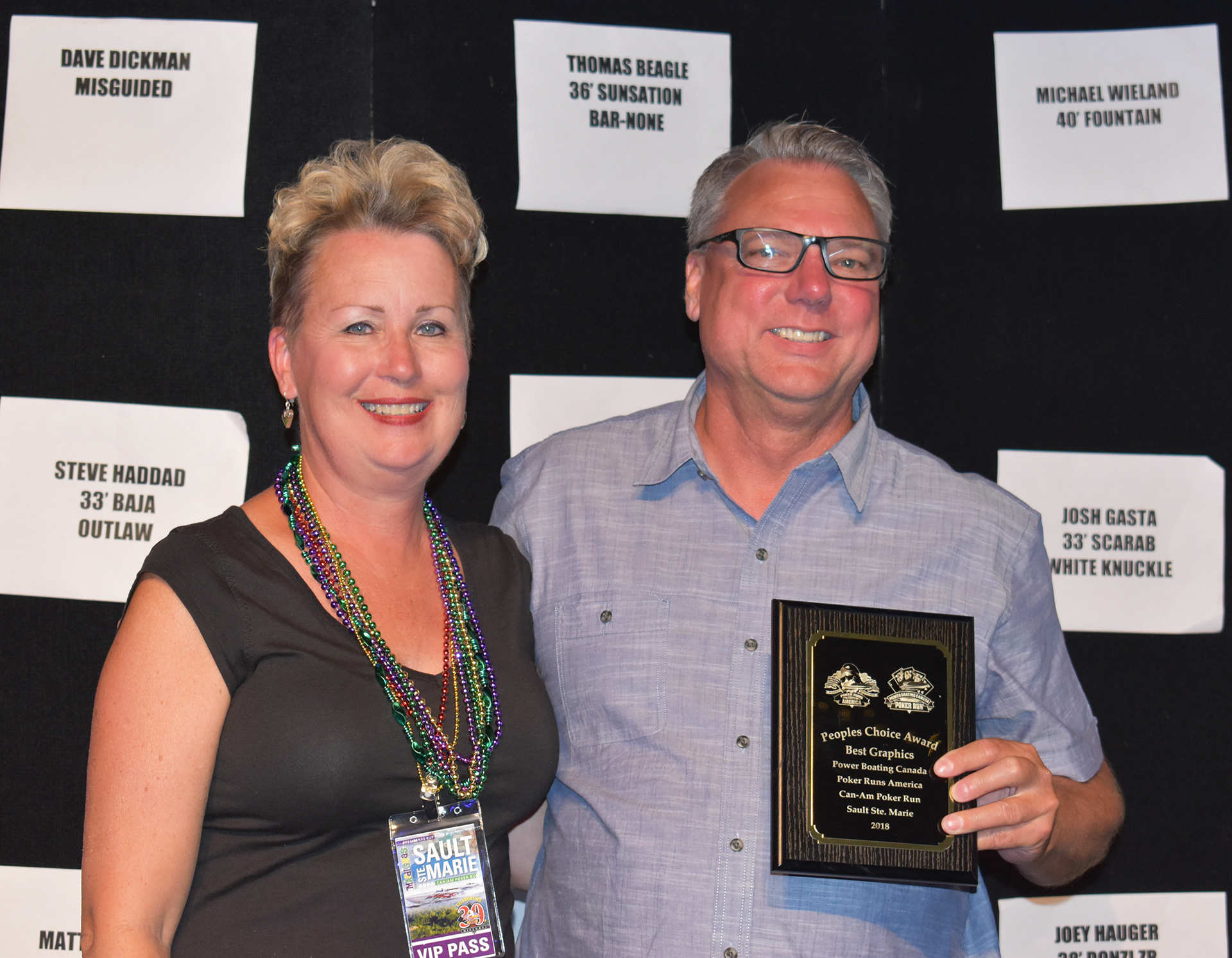 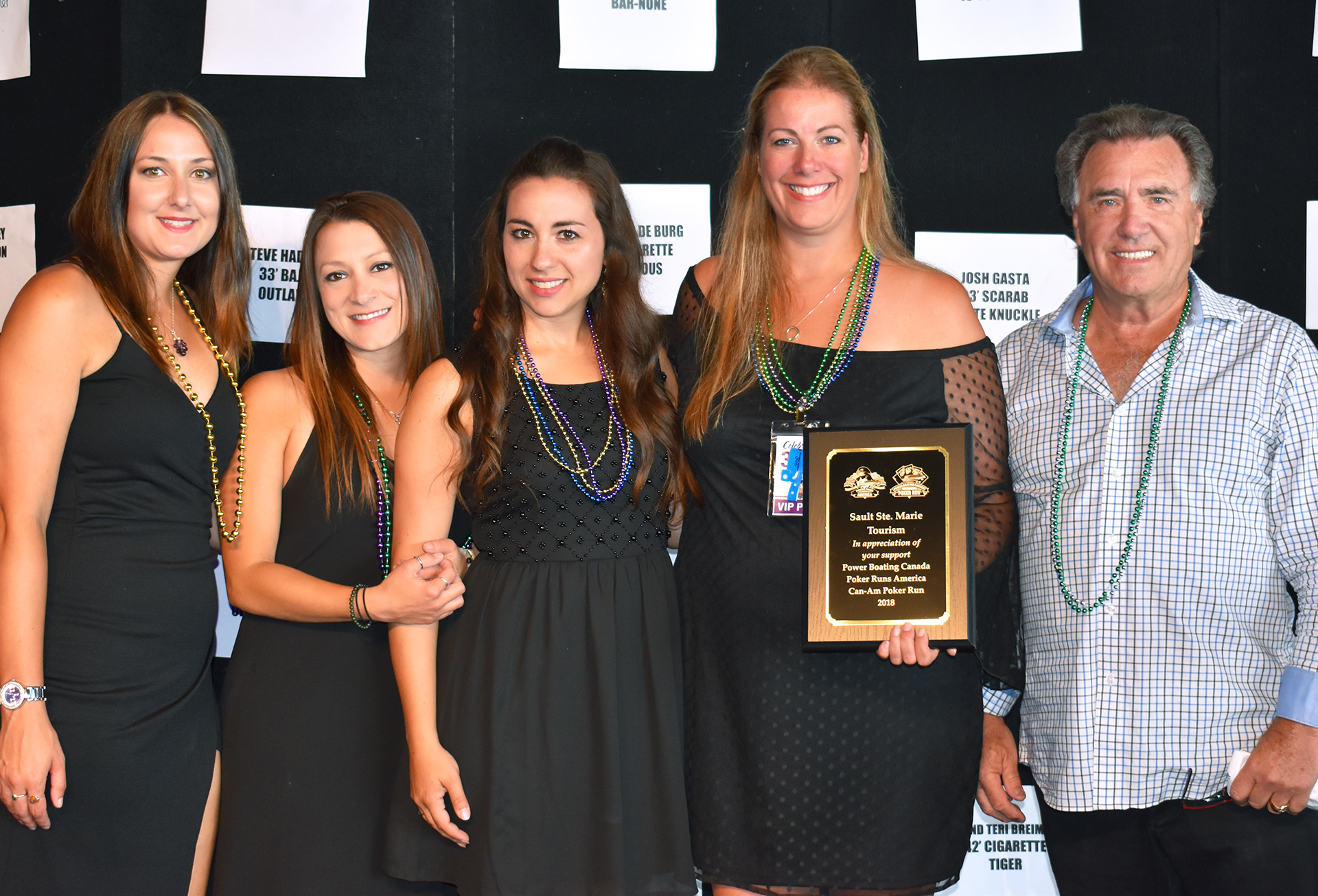