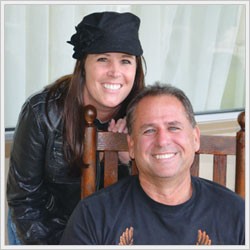 Over the course of nearly two decades, poker runs have captured the attention of the performance boating community, affording the opportunity to enjoy the thrill of speed with family and friends in an unintimidating environment.

Whether they are 36 or 66, enthusiasts of all ages enjoy the thrill of wave-riding action at venues across North America. In fact, it wasn’t until long-time poker runner Bill Gogel of Daytona, FL, was in his mid-40s when he caught the performance bug and began attending poker runs.

An avid boater since he was 19, Gogel has owned and operated a series of boats of all types but his outlook on boating changed forever in 2007 which he visited the headquarters of Velocity Powerboats in Sanford, FL.

“I often drove past Velocity and I always wanted a performance boat. I finally stopped in a few times but could never make a decision to buy one. Finally one day, I went over and spoke with Kenny Hohwiesner (general manager for Velocity) and Steve Stepp (company owner) and they sold me my first Velocity, a 32.”

A short time later, after extensively running his 32,’ Gogel once again visited Velocity and saw an all-new 390 in production and “fell in love with it.” A few years later, he bought it without a second thought.