Standing in the parking lot of Checkmate Boats, an iconic brand name in the high-performance powerboat world, I couldn’t help but stare directly across the road at acres upon acres of freshly baled hay sitting in an open farm field.

Checkmate, once a thriving business located in Bucyrus, Ohio, or as the visitor’s bureau likes to say, “A small Midwest city in the middle of everywhere”, had once been considered a major employer in a town of slightly more than 12,000 people. After 50 years of building fast outboard- and sterndrive-powered runabouts, Checkmate’s doors closed in March, 2013, only to be re-opened five months later when Global Marine Power, Inc. stepped up and acquired the company’s assets.

Several thoughts crossed my mind. Having never visited the Checkmate factory before, I had forgotten that it was situated in a rural community. During the early 1970s, my parents visited Checkmate – twice as a matter of fact. My Dad owned one of the original 19-foot outboard models and at 16 years old, I was driving around Lake Huron in a 14- footer, the predecessor to my first race boat, the MX13. It was indeed a winner, an Alison thumper at the time. I won my first race and a championship in that boat, so today’s visit meant more – much more – than another interesting plant tour.

Next, I thought about the business. What was motivating Global Marine and principal Joe LoGiudice to put Checkmate back on its feet? LoGiudice, after all, understands the current state of the marine industry. High-performance has been hurting, and while showing signs of recovery, didn’t he have enough on his plate being the owner of Hustler Powerboats?

Like a fly ball in a baseball game, the phrase that Kinsella, Kevin Costner’s character, heard over and over in the movie “Field of Dreams” kept popping into my head – “If you build it, they will come.” Well, I thought, the field is across the road, the bricks and mortar are in place, and there are skilled, hardworking long-term employees anxious to build boats again. That, with a successful and industry-passionate owner who knows how to structure a company made me think, “Yes”, there’s a great opportunity here.”

With that, and a photo of the field, I walked into the main office and caught up with some of the old and new people who were busy putting plans together, laying up boats, ordering materials and even hooking up a new telephone system. 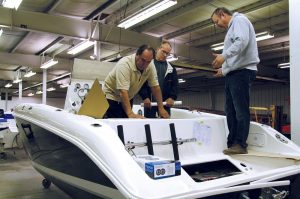 I had piggybacked on a trip to Checkmate that LoGiudice had previously planned, so earlier in the early morning we had flown from Hustler’s facility in Calverton, NY, to Bucyrus – therefore having plenty of time to discuss Global Marine Power’s vision.

“Checkmate shares many of the processes Hustler uses in manufacturing”, said LoGiudice. “They build a great boat in the 18 to near 30-foot range, which is a market that Hustler doesn’t compete in. We have customers right now who are interested in that size and style of boat. So we felt we could help put them on the water today if we offered a full range of boats.”

Furthermore, LoGiudice is looking for new customers. He knows there are plenty of people who have been sitting back, ready to jump into the market. “We can offer them whatever their budget will permit. If they want to start smaller and trade their way into a larger boat, then we’re happy to do that,” declared Joe.

While Checkmate is considered a production line boat, rather than a one-off custom unit like a Hustler, truth is, both are hand-built using similar techniques. Customers are free to customize and there are plenty of options available, including individualized graphic patterns that Paul LoGiudice, Hustler’s V.P. Sales/Marketing – and a graphic artist himself – is ready and able to design.

Since Checkmate became a Global Marine Power company, LoGiudice made some decisions that to date have been well received. Number one, Checkmate boats will continue to be built in their existing Bucyrus, Ohio, factory and Hustlers will be built in Calverton, NY. Some resources may be shared where it helps both companies, including purchasing strength and the manufacturing of certain components – where one company or the other would need to use an external supplier.

Hustler’s Production Manager, Tim McGrattan, who accompanied us for our meetings, may be visiting the Checkmate plant frequently. “Both Hustlers and Checkmates are well-built boats. There is a connection for both companies. As parts will be shared, costs will go down”, Tim said.

Checkmate will re-hire local talent as demand increases. Kip Combs, son of Checkmate’s original co-founder/President Bill Combs, was brought back to manage sales. J.R. Jenny, former Director of Sales and Marketing for Bucyrus’ “other” once local boat builder, Baja Boats, will work with Kip to grow the Checkmate and Hustler brands.

Dean Reynolds, Checkmate’s affable General Manager, is another long–time employee and son of Dean Reynolds Sr. who at one time managed the plant himself. Dean appreciates the opportunity to rebuild and understands the effort required in moving forward.

Reynolds’ primary team is made up of former employees, some with decades of tenure. Ken Putnam is one of them, a key player who, while not holding a true title, can do most anything. He’s responsible for the molds – cleaning, waxing and releasing the gel-coated hulls, decks and miscellaneous components. Ken tapes off the stripes, cuts his own patterns and is one of few “painters” who can do it well and quickly.

Ken is definitely an individual – open and honest about his past. Since being hired in 1975, he’s shared his opinions with many – and because of that either quit or was released six times – but nevertheless he was always rehired because of his skills. Today, he’s older, wiser and feels the new Checkmate is a good thing.

Lisa in the lamination department was working on a deck for a Pulsar 2400 when I asked her about her job. She starts early in morning and while I was walking around the floor, I found her applying fiberglass mat to three different boats – and finishing each job by days end.

Other talented staffers include Linda Harley, who has long been sewing Checkmate’s interiors, and Alan, whom I watched routing a bulkhead in the woodshop. Back in the assembly area, I spoke to several others who were working on various projects, including two new boats destined for the Miami International Boat Show in February.

The last person who walked through the door, just as we were set to depart, was Checkmate’s co-founder Bill Combs, now a spry 86, with a mind as sharp as ever. Met with a huge smile by Joe LoGiudice, we talked about the 1980s, when Checkmate had 280 people working in three shifts to keep up with production. Back then, up to 45 boats per week went out the door. But that was then, this is now.

While we can’t predict what the future will bring, be assured that there are synergies between Hustler and Checkmate. Like Combs, LoGiudice brings a similar work ethic to the table. He’s hands-on and bent on maintaining quality control by building boats in-house.

One thing is certain – Checkmate is back. As for a response to that whispering voice in the back of Ray Kinsella’s head? I’m thinking LoGiudice would say, “Let’s Play Ball”…