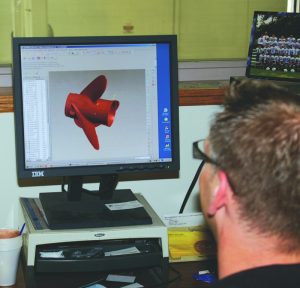 It looked like something out of science-fiction movie. Three men clad head-to-toe in extreme heat-resistant clothing were pouring red-hot molten stainless-steel into specially made shells. One wrong move and body parts would bubble and disappear from contact with the searing liquid. Were they making guns, ammunition, martial-arts weapons or something for heavy-duty industrial use?

Nope. This was all real. I was at Mercury Marine learning what goes into making the most popular propellers in performance boating. Have you ever watched that Discovery Channel show, “How It’s Made?” The host takes you through the entire process of making bubble gum, putting the caramel into a chocolate bar, making a plastic garbage bag, or even complex processes like micro-chips or producing steel bars from the iron ore to finished product. I’m fascinated by the show, so when Mercury Racing’s Marketing Director Rick Mackie invited me to Mercury Racing’s headquarters in Fond du Lac, Wis., to tour the stainless-steel propeller facility, I was tripping over myself to say yes.

Mackie and I were met at Plant #98 (no one is quite sure how all of the various buildings in Mercury’s Fond du Lac operations were originally numbered, but there definitely are not 98 of them) by Plant Manager Darlene Fyvie and by Rick Bauer, Process Manager, for Mercury Propellers. Bauer is a Mercury veteran of more than 30 years and was my “tour guide” for this episode of “How It’s Made.”

Originally Plant #98 was an iron foundry producing MerCruiser and Mercury outboard exhaust manifolds, flywheels, etc., but in the early 1990s, Mercury’s entire stainless steel propeller operation was consolidated in the facility. That brought design, engineering, manufacturing, finishing, and packaging all into the 68,000-sq.-ft factory. “All Mercury and Quicksilver stainless props are made here,” says Bauer. “All except original Kiekhaefer racing (now Mercury Racing) props,” he clarified. “We’re geared more to higher volume production here,” he added. “The lower volume CNC Cleaver Racing props are made at another location.” Business must be good. The plant is running 6-day shifts, 24-hours per day to keep up with dealer demand. 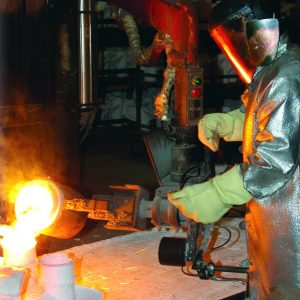 Bauer started by taking me upstairs to the design and engineering area, a typical cubicled office environment where I was introduced to several of the staff, some of whom had been with Mercury many years. I wanted to sort out in my own head the oft-recited folklore of propeller design being a mixed bag of half art and half science. After being walked through a sophisticated on-screen CAD-CAM propeller program where multiple variables ranging from horsepower, to boat size and weight, to intended use such as fishing, water-skiing, performance boating, or simply family cruising could be input along with propeller variables such as number of blades, shape of blade, pitch, diameter, etc., I came away knowing that “art” had long been discarded.

Donning a hard hat, safety goggles and special safety shoes, Bauer then took me in tow to, in his words, “Where it all begins.” I’ve been through several foundry-type facilities and Bauer’s “beginning” is not quite what I had in mind. He showed me large barrels containing pellets of a special red wax being fed into a giant heated mixing machine where the pellets were melted and the thick liquid result was piped to the next operation.

Bauer explained. “Aluminum propellers are made through a die-cast process, but because of the much higher melting temperature (approximately 2,500 degrees Fahrenheit) of stainless steel, ceramic investment casting has to be used.” That requires the utilization of wax to produce the propeller patterns. Makes sense. The wax is injected into proprietary, composite metal dies. There are numerous dies for three, four or five blades of whatever shape, size, pitch, and diameter is required for production at that moment. There can be a multitude of different shapes and sizes of props going through this process at any given moment.

Once the wax propeller pattern solidifies, it is removed from the die. The metal die is reused over and over again. The resulting wax “pattern” is fastened to a continuously moving overhead conveyer to be dipped into a ceramic slurry, while slowly rotating through various arcs to ensure continuity of thickness. Each wax pattern is dipped and hung to cure a total of five times to obtain the desired thickness of ceramic. The curing of the ceramic shells is critical, so it’s performed in a temperature and humidity controlled “clean” room. Ceramic is the choice material for casting stainless steel propellers because, in Bauer’s words, “Ceramic is porous. Any bubbles of air that may get trapped during the pouring process will escape.”

These completed ceramic shells are autoclaved at 325 degrees to melt out the wax propeller pattern. The wax is collected and returned after a purification process to the original wax vat. Ceramic shells are then pre-heated 24 at a time in a natural gas oven to 2000 degrees. At this point in our tour, I heard loud bells ringing throughout the plant. “They’re going to pour,” interrupted Bauer. “This happens once per hour. You’ll enjoy this. Let’s watch. We’re using a new ‘X7’ stainless steel alloy for all of our racing props plus some others too. It’s 30-percent stronger than the current ‘15-5 PH’ alloy.” The 15-5 refers to a content of 15 percent chromium, 5 percent nickel, and the PH stands for precipitation hardening, or heat treatable. I wasn’t told the X7 alloy content.

Our attention was drawn to a smallish electric induction furnace not much larger than a pizza oven but holding a temperature of 3000 degrees F. There, the three aforementioned workers heavily clad head to foot in extreme heat-resistant clothing directed the operation. One used a long-handled “fork” to carefully remove the pre-heated ceramic shells, one at a time, from the oven. In one well-orchestrated motion, the hot shell was handed over to a second man who grasped the shell in both hands and gently placed it on a floor trolley. Once two shells were in place, the third worker had manually directed a pouring spigot of molten stainless steel from the furnace and filled the two shells.

This choreographed routine continued with a minimum of motion and a maximum of coordination between the three obviously experienced workers until all 24 ceramic shells were filled and glowing red with stainless steel. The trolley was then simply rolled to a nearby aisle for cooling. After reloading the furnace with a fresh stock of eight or so roughly 2’-long and 2”-diameter stainless steel bars to be melted, the three workers were obviously relieved to be able to remove their duds and move away from the heat. 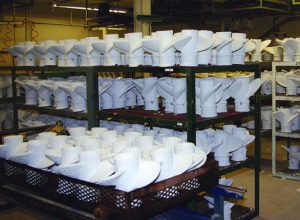 Once cooled, the brittle ceramic shell is quite easily hammered away from the propeller by hand. The resultant propeller looks quite recognisable and even usable. The next step is a cleaning process where the pouring cup is removed from the propeller and the remaining ceramic is taken off. The prop heads to the machine shop where each one receives personal treatment of machining the hub. After the machining process, the propellers move to surface refinement. This is accomplished in a series of vats filled with ever-reducing diameters of polishing granules – almost akin to sandblasting but without the blast. The propellers are mounted on vertical shafts which rotate each prop slowly and around through the circular vats of polishing granules. Then it’s off to the next workstation where it is packaged in the famous black, red, and silver box for shipment to the dealer.

And that’s how your stainless steel Mercury propeller is made. That’s not too complicated? Or is it?