Kurt Flachbart was listening to his engines idle at the end of last summer and he heard a noise that caused concern to his educated ears. After some investigation, Flachbart found the source of the noise, a rattle coming from the superchargers on his twin Mercury Racing HP 575 SCi engines in his 2002 Cigarette Racing Team 30’ Mystique.

A talented mechanic who works for sterndrive manufacturer Konrad Marine, Flachbart takes care of his equipment. He immediately started searching for a solution. The Weiand superchargers that came on the HP575 SCi were no longer available through Mercury Racing, which had discontinued them in 2009. The original blowers had been reconditioned by The Blower Shop of Simi Valley, Calif., at about 100 hours, and had since had about 100 more hours put on them by Flachbart and by the boat’s previous owner. Flachbart didn’t want to do a temporary band-aid-like solution and have the superchargers freshened up again.

“I was uncomfortable with the rattling noise they were making at idle, so I decided to upgrade to new blowers,” said Flachbart.

After some research, he found two candidates who manufacture replacement blowers for the HP575 SCi, Blower Drive Service (BDS) of Whittier, CA., and The Blower Shop.

The BDS replacement was a larger unit and would have required an engine hatch modification, plus a recalibration of the engine’s electronic control module, which Flachbart was not willing to do. He chose the The Blower Shop’s kits, part #2096 ($3,350 retail price) because they are a direct replacement for the Weiand supercharger on the HP575 SCi and because the aftermarket products maker made some important reliability upgrades. First, the tips of rotors are Teflon stripped and the gears in the forward housing are hardened for improved durability. 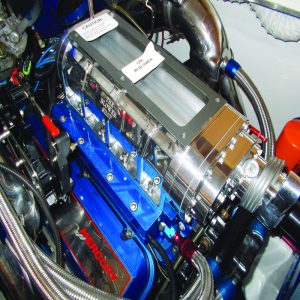 Like many performance-boat enthusiasts, the previous owner of the boat, with whom Flachbart is friends, had made other upgrades to the engines. Those included an increase in compression ratio, flat-top pistons, a full hydraulic roller valvetrain and Whipple Industries intercoolers. With the upgrades and smaller pulleys on the stock superchargers that raised boost to 6 ½ psi, the engines make about 750 hp. In stock dress, the HP575 SCi made 575 hp at the crankshaft and had a maximum boost rating of 4 psi.
Flachbart explained that the rattling he heard could have led to much bigger problems because the noise meant that the two counter-rotating rotors within the supercharger housing were actually hitting when they were spinning. This is known in performance circles as “rotor burn.” The gears in the Weiand supercharger were not hardened and they were cut in a helical or tapered design. The gear bearings are also single-row versions with typically about .007” of axial play. When the gears wear, the amount of play increases and the rotors can bump. If this happens for a long enough time, the rotors can seize or they can start to drop aluminum shavings down into the engine itself, which can be catastrophic.

Looking at the project, Flachbart, who did the work himself (a handy backyard mechanic can also handle this project) started by removing the flame arrestors from the top of each engine. He had originally planned to take off the throttle body fuel injectors with the old superchargers as one unit, but he couldn’t reach the plug on the backs of the engines to remove the wire harness. Moving quickly to Plan B, he simply removed the throttle bodies and moved to the side as best he could.

After pulling the drive belts off the fronts of the blowers, he could then remove the stock units. All told, this process took about two hours.
In addition to the money he spent on the superchargers, Flachbart estimated he spent about $40 on new gaskets for each blower unit and for the throttle bodies. He also had to spend $45 each through The Blower Shop for a shorter stud kit (Part #2595 $45 per kit). The studs for the existing Whipple Industries intercoolers were too long and didn’t have enough threads to properly secure the new units. He also had to purchase new shorter stainless steel Allen head cap screws for the throttle body adapter plate. 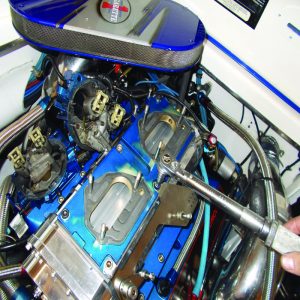 Because they had been replaced not long ago, Flachbart kept the rubber O-rings that were in the intercoolers. He installed the new studs on each intercooler and then ran a bead of high-temperature gasket sealant before positioning the supercharger on the studs. There are two sets of holes in The Blower Shop unit’s case and Flachbart had to use the rear set to properly install his new superchargers.

With the new units in place, he fastened the locknuts and torqued them to 10 to 12 foot-pounds with a torque wrench. That doesn’t seem like much force, but over-torquing could warp the base.

Next Flachbart placed new gaskets on top of the blower units before re-installing the throttle-body adapater plate and torqueing it to proper specifications. He then re-fastened the throttle body injectors, making sure that their housings were linked just as they were in the original installation. With the primary work done, then it was time to re-install the throttle body adapater plate and re-install the shift and throttle cables. With the cables connected, he plugged in the vacuum and fuel lines and reconnected all the wire harnesses.

After he re-installed the flame arrestors, all that remained was to install the new pulleys on the front of the blower and the belt tensioner. Flachbart used Loctite blue thread locker on the four studs for the pulley and the tensioner came with its own locking hardware. The belts slipped easily in place and after about five hours of work, his new superchargers from The Blower Shop were gleaming beneath the flame arrestors.

“It was a pretty easy swap,” said Flachbart with his frequent smile. Flachbart lives in Southwestern Maine and once the ice and snow are clear, we will take a ride with Flachbart when he breaks in the new blowers and update you with the results.