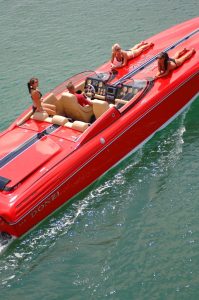 Riddle me this, Batman. What’s the best way to make a boat run faster? Most people would say that you should put a stepped bottom under it. The question gets more complicated when the boat is already a stepped design.

That was the dilemma Donzi Marine faced with its 38 ZRC. It was already a popular twin-stepped design, but company CEO Lee Kimmel and Customer Service Manager/chief boat tester Gene Weeks knew there was more speed in the boat.

To achieve their goals, they added shorter intermediate steps to force just a little more air under the bottom to further break adhesion to the water, improving efficiency.

You can’t argue with the results. With Weeks at the wheel and a pair of 700-hp Mercury Racing HP700SCi NXT-1 packages providing the power, the boat ran 115.2 mph across a windy Sarasota Bay. The 6” chop further helped keep the 38 ZRC from sticking to the water. In mid-range acceleration tests, the boat ripped from 60 mph to 80 mph in 7.6. seconds and from 70 to 90 in 8.6 seconds.

“This boat is the answer to the problems that people are having getting insurance for catamarans,” said Weeks. With its sit-down layout and plenty-fast top end, he’s got a good point. It gives you the protection from the elements that most people expect in a cat and you can insure it more easily. Plus since, it’s got an 8’2” beam, which means that you can tow it to the next poker run without a wide-load permit. Taking a closer look at the 38 ZRC’s bottom, the first step starts right under the quarter F-16 canopies, at about the 17’ mark. It’s 2 1/2” tall. Go aft another 2’11” and there’s a new 1/2” step followed by another 2 1/2” tall step 3’ aft. The final half-incher is 3’8” farther back. Lifting strakes set close to the V in the forward section of the running surface help get the boat on plane quickly and carry the bow slightly up at all speeds. At speed, the boat rides on a keel pad with a shallow V. An 8” tall transom notch spans between the outer strakes.

After driving the boat in the wind-blown conditions, I would welcome the chance to run it in the washing-machine conditions that you’d get on a crowded Sunday in your favorite bay or during a poker run. The boat carves smoothly through circles at 75 mph and zigs and zags through slalom turns up to 60 mph. Even at 100 mph the boat responded predictably to evasive maneuvers.

When you get in big water, you’ll appreciate two things. First is that the boat is perfectly balanced and flies level when it launches off swells. Next is the 38 ZRC’s heavy-duty construction. The bottom has a 1 1/4” thick composite core with additional stiffening in the sides and deck. Stringers are composite cored forward of the engine compartment, while those beneath the motors are cored with marine plywood. Donzi puts the hull and deck together with a methacrylate adhesive and then bonds the joint around the inside perimeter with fiberglass. Another feature of the boat that I prefer is that you sit down to drive it. From the days when I raced offshore until now, I always feel more connected to the boat when I sit down to drive. The 38 ZRC is set up with five well-padded high-backed buckets. As the saying goes, there ain’t a bad seat in the house.

I liked that the boat is set up with port or starboard helms. I’d rather drive on the port side, freeing up my right hand to throttle. Or you can move the helm to starboard when you want to let a friend drive. When I drove, I felt the throttles were a little too far away from the port bolster. Donzi agreed and said it will move them about 2” closer, which should work fine.

To accommodate one- or two-person operation, the Livorsi Monster Series instruments are laid out with the most important gauges ahead of the port bolster. The list includes the SmartCraft monitor flanked by tachometers. On my test boat, there were no mechanical trim indicators for the drives or tabs because they’re included in the SmartCraft screens, something that will probably meet with mixed reviews because they’re not that easy to see in direct sunlight. There’s an Azimuth compass tucked under the quarter canopy. The deck beneath each canopy is finished in black to kill glare. 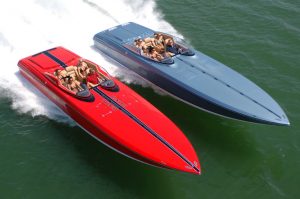 Forward of the centrally mounted controls, the Garmin 2206 GPSMap is visible from either front seat or from the aft bolsters. The trim buttons are just below so that you can reach them with your throttling arm, meaning you’ll always have the other hand on the steering wheel. It’s a smart setup. There’s also a second set of buttons ahead alongside the starboard steering wheel hub if the driver wants to help set the boat’s attitude when the throttleman’s busy reading waves. To ensure that you’re as comfortable as possible during a run, there are power-adjustable footrests.

On deck are twin hatches that provide access to the hull so you can check on it after a hard poker run. They also provide owners with the opportunity to customize the area with stowage bins or even a portable head for emergency calls from Mother Nature.

Cockpit stowage is provided in gunwale trays and in the base of the triple backseat bolsters in compartmentalized lockers. I prefer this to one continuous box because it lets you better contain things like oil and gear lube in one section and cleaning supplies in the other. You don’t need to stow a long item like a paddle on a 38’ go-fast. There are also large lockers between the aft seats and the engine compartment that are insulated so you could even use them for coolers.

To help backseat passengers secure themselves, there are T-style aluminum grab handles in the armrests. I prefer the softer loops found in other boats because they can’t hurt you as you exit if you get tossed out of the boat in an accident.

Your wife will bemoan that there’s no padding on top of the engine hatches, but women don’t understand that a purebred go-fast isn’t designed for tanning. The lightweight hatches save overall boat weight in more ways than one. They’re so easy to pull up by hand, you don’t need to install an extra hydraulic pump and assemblies to raise them.

With the hatches up, you have an easy step into the compartment onto the starboard outboard stringer. Stainless Marine sea strainers and Livorsi aluminum battery boxes are in good reach as are all the trim pumps on the compartment bulkhead. Normally, I’d gripe about the battery switch being under the hatch, but remember it’s a manual model, so it doesn’t matter.

Vertically installed aluminum L-angles provide a solid foundation for the 700-hp surcharged mills and you can get between the engines without a problem. About the only thing I saw that could use improvement was that some of the limber holes had a rough finish and could chafe hoses and wires. This was Hull No. 1 and Donzi said that won’t be the case on future models. What will always be the case with the 38 ZRC is that it can post the big speed numbers and remain driveable. Riddle solved.