Fountain Powerboats has a new 39’ center console, the 39 NX, that parent company Iconic Marine Group will be unveiling later this week at the Progressive Miami International Boat Show.

“We wanted to bring a fresh look and style lines to the boat,” said Iconic Marine Group chief operating officer Joe Curran. “The 38 was built to fish and this boat was built for comfort and then to fish.”

Among the comfort-oriented accessories on the 39 NX are dual Simrad 16” screens with radar and autopilot at the helm, which has side-by-side seats with foldup bolsters. Aft, there’s a dive door with a Garelick telescoping ladder and overhead is a fiberglass T-top. The bow features a chaise lounge on the front of the console, wraparound bow seating with a table and twin coolers. In the cabin, there’s a stateroom and pantry, plus a head with sink and vanity. 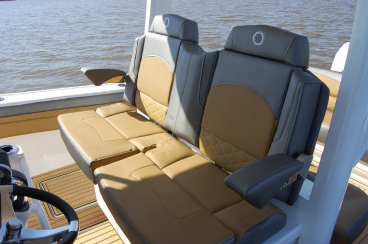 The new boat is 39’ long with an 11’3” beam and it’s 4” taller than the Fountain 38’ center console. During a phone call from the company’s booth at the boat show, which will open Thursday, Curran said, “The 38 looks like you can put it inside the 39.”

The 39 NX rides on Fountain’s twin-step Positive Lift hull design, but it was modified for the increased beam and size of the new boat. Curran said that he and Reggie Fountain III took a 39 NX and a Fountain 38’ center console out for a test with Curran driving the 38 and Fountain III driving a 39. Both were powered by triple 350-hp Mercury Verado outboards and Curran said the new boat “walked away from him.” With Mercury Racing Verado 400R outboards, he expects the 39 NX to exceed 80 mph once it’s dialed in.

While the company has been concentrating on center consoles, it borrowed from its offshore racing heritage in the construction of the new model. The 39 NX is the company’s first center console that’s built with resin infusion and a single-piece stringer and bulkhead grid that is built with the same construction process.“We took that from the racing heritage and we’re able to build a boat that’s bigger, stronger and put it on a diet so it will run,” said Curran.

He explained that Fountain started with a 39-footer because it puts the company in a position to go bigger or smaller. Next up will be a 43’ model and then we could see a 35 NX in the future.