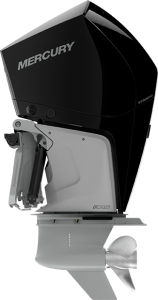 The most noteworthy specifications are the displacement and weight. First, they have a displacement of 4.6 liters and the FourStroke version weighs 527 pounds, the Pro XS checks in at 505 pounds and the Verados weigh 600 pounds. That gives the motors some advantageous power-to-weight ratios.

Mercury said that the motors’ 4.6-liter displacement is the highest in the 250 to 300-hp class, which should translate into some strong torque, especially at mid-range. Having two extra cylinders compared to the competition is going to give Mercury some strong bottom-end and holeshot numbers.

All the engines use Advanced Range Optimization that automatically adjusts fuel delivery to deliver maximum range. Pro XS and Verado models have Transient Spark to boost torque during hole shot. Additionally, the Pro XS and Verados can be rigged with digital or mechanical components to make them more compatible for repower applications.

Adaptive speed control allows for engine rpm to be maintained regardless of changes in load or condition without needing to make frequent throttle adjustments. Verado V8 AMS models are the only ones in the new series compatible with Mercury joysticks.

Like the V-6s, the larger siblings have the Top Cowl Service door that lets owners check and fill the oil without having to remove the cowl. Speaking of the cowl, the motors are available in traditional Phantom Black and shades of white with colored accent panels.

To put the power to the water, the V8 series engines have a 5.4-inch diameter gearcase that is an evolution of the lower unit used on the L6 Verado. The V8 AMS Verado is available with 1.85:1 or 1.75:1 gear ratios while the CMS-designated FourStroke and Pro XS all have 1.75:1 gearing.

For multiple engine installations, the V8 models mount on 26-inch centers and Pfeifer said that meeting this specification was a priority from the start of the project. The motors are available in 20-, 25- and 30-inch shaft lengths so they can be used on offshore and inshore saltwater fishing boats, bass models, pontoons, runabouts and commercial applications.

The new motors replace the 2.5L and 3.0L OptiMax, L4 Verado and L6 Verado models in the same horsepower ratings. The company will keep its 350- and 400-hp supercharged Verado models, but Mercury isn’t saying anything beyond that. The 350-hp Verado will remain in the Mercury Marine portfolio while the Verado 400R will be a Mercury Racing product.