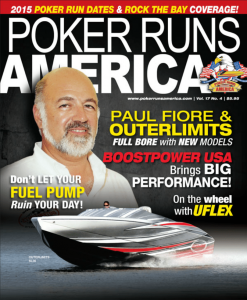 It was early February, just before Paul Fiore and offshore racer and company consultant Steve Curtis we’re leaving for the Qatar Cup in Doha Bay when Poker Runs America inquired about currently model launches and the direction of Outerlimits Powerboats for 2015. Fiore, who is now at the helm of one of the most acclaimed offshore boat companies in the performance boat industry, is steering the company to a continued, solid future with many exciting developments in the works for the go-fast and racing communities.

It was early February, just before Paul Fiore and offshore racer and company consultant Steve Curtis were leaving for the Qatar Cup in Doha Bay when Poker Runs America inquired about currently model launches and the direction of Outerlimits Powerboats for 2015. Fiore, who is now at the helm of one of the most acclaimed offshore boat companies in the performance boat industry, is steering the company to a continued, solid future with many exciting developments in the works for the go-fast and racing communities.

In the last few months, Fiore and the expert team at Outerlimits have been busy finalizing new boat models in preparation for the Progressive International Miami Boat Show and the new season. Yet, with many unanswered questions circulating the offshore community about the future of Outerlimits Powerboats since the tragic loss of his son Mike Fiore last August in the Lake of the Ozarks, Fiore remains optimistic about what lays ahead concerning the company.

“The direction of Outerlimits is the same as it was before and nothing has changed,” said Fiore. “Michael had a lot of new products in development and we are continuing with that. New  models will be showcased in Miami and there will be a few new campaigns for the racing arena as well.”
Fiore, an offshore veteran with decades of business experience in the boating industry, explained there are always challenges within the operations of a boat company, yet he looks forward to a strong year.

“There are always obstacles to hurdle over with owning a boat company and there always will be,” said Fiore. “I did it when I owned Hustler for many years and even when I helped Mike out at Outerlimits. Mike always wanted to do the next best thing and was consistently designing new models. We are continuing to do that.”
Every year, Outerlimits dazzles offshore enthusiasts with new models, complete with fresh concepts and designs. This year will be no different.

For instance, one of the models that will be showcased in Miami is its new SL41, which is designed to bridge the gap between the recently introduced SL36 and the SL44. It’s a full-cabin boat available with power options to include Mercury Racing’s 520 or 565 sterndrives up to Mercury Racing’s 700 SCis.

Featuring a five-step bottom with a stepped pad, the 41’s slick and streamlined profile is complemented with a fully bonded hull and deck and the cabin highlights an electronic concealed head, in addition to many standards and available options.

“It will be an all epoxy boat, like all of our boats are right now with a lot of new concepts,” says Fiore. “Basically, we are taking what we learned after setting the APBA-sanctioned world speed record in the V-bottom class last spring and applied it to the 41.”

In addition to also displaying a recently-built SL50, expect to see an Outerlimits’ 39’ Spirit of Qatar Race catamaran, a project that has been in the works for several months with the added input and expertise of offshore racer (and now a consultant for the company), Steve Curtis. The complete rigging will be finished by the spring and the 39’ pleasure catamaran will be available just prior to summer.

“Michael and Steve were good friends as they both grew up in the marine industry and he brought Steve in as consultant for some of the projects we are working on,” said Fiore. “While I can’t divulge any of the details on the 39 right now, lets just say we have a couple of new tricks up our sleeves for the coming season. However, Steve is a real gentleman and an expert at what he does. It’s great to bounce ideas around with him.” 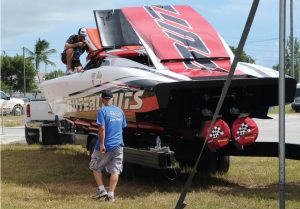 Perhaps some of the biggest news this year is the designing of a new Outerlimits center console. While it’s not yet officially named, Fiore currently labels it as the CC44, a 40-foot-plus-footer that will be available with outboards, I/O’s and even diesel power in a triple configuration. A plan that began more than a year ago, Fiore says they have just completed the hull mould and they are currently in the middle of building the deck mould.

Following months of researching the center console market, the CC44 will have all of the accommodations of a center console. For instance, the cabin will have a couple of bunks, a head, a sink, with more than six feet of headroom with much emphasis above decks featuring ample seating, a fully-loaded helm, and many bells and whistles the company is known to provide.

While the first production hull is currently being built, it will be delivered before summer. Two deck plans will be available including one recreational and the other for fishing.

“We already have two models sold, which is great,” said Fiore. “This is a market where a lot of guys seem to want to go. The reception so far has been good and we have to go where consumer demand is. That’s one of the main reasons why we started building cats. The lines and styling look like a center console, but will have the Outerlimits’ flair and design to match the rest of our line.”

With all these developments in the works, the history of Fiore and Outerlimits is just as interesting as the present. More than four decades go, Fiore worked as a troubleshooter for IBM, travelling the globe determining and solving computer problems. In his off-time, however, he would spend weekends drag racing on the local NHRA circuit (known today as a modified production circuit).

His drag racing “hobby” become more and more busy, as he moved up to Pro Stock, running a Shelby Mustang. Yet, while married to his ex-wife Joyce, with two young children Donna and Michael, Fiore retired from the automotive racing circuit, deciding that recreational boating was a better and safer place for the kids to grow up than on a drag strip. In 1972, he bought his first boat – a 19-foot Winner runabout propelled by a 140 hp Mercury engine – the biggest outboard available at the time.

After using the boat constantly on weekends and holidays, Fiore came across a 24-foot IMP X246 Magnum hull with an IMP deck (Apelco owned both companies at the time) and purchased it with the hottest package of the day – a Volvo (made by Chris Craft) drive with a Chevrolet engine. 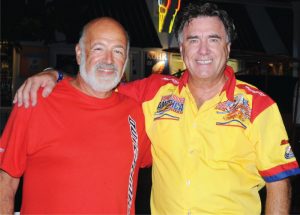 While really high performance power at the time wasn’t available as it is today, Fiore took matters into his own hands and after changing up the props, he reached a much improved speed of 52 mph. He then decided to modify the drive and after doing extensive research, he spoke with engineers from Mercury, OMC, and Volvo asking what the shape of a lower unit should look like to make it even more efficient.

He then took the drives off the boat, replaced it with his own lower unit. Modifying the nose cone, he developed his own mold made of epoxy resin and fiberglass, and extended the bullet double the size of the lower unit. Later that spring, Fiore put the boat in the water and it picked up about seven or eight mph. After some engine modifications, he hit 65 mph.

The boat wasn’t designed to handle that kind of speed and one day when Fiore was out running the boat he hit a wake, took off, came back down and landed sideways. He broke his pelvis, a couple of ribs and fractured his spine. Joyce was adamant that if he was going to continue boating, they needed a safer boat.

He then began to look for a larger, performance-style craft and while there weren’t many boats in the over-30-foot category at the time either, he looked at building his own boat. After spending many hours at boat shows, Fiore and a few of his friends went together in splitting the costs on building a 32-footer and hired a builder who knew fiberglass, woodworking and the mechanics of building a plug.

With just the basic dimensions (and without any real drawings), some designs of the boat consisted of a 44-inch freeboard, and a 24-degree bottom with specific strake sizes and placements. The deck line was laid out with sticks and they built from there. History was made in 1978 of what would become the 32 Hustler, built in a rented tin building in Patchauge, located at the eastern end of Long Island.

The first 32 they tested had twin engines – a 330 hp 454 Mercury on one side and a 325 hp 427 Mercury on the other with TRS drives and 23-inch props. In the end impressive speeds of 71 to 72 mph at 5000 rpm were achieved. After meeting their initial objective of building four boats, other boaters were impressed with the 32 and asked where they could buy one.

However, as his friends didn’t want to stay in the boat building business (and with an offer from a boat company for the molds) Fiore and his wife decided to buy the molds themselves. Still at IBM, Fiore contracted out all fiberglass work and would come in at nights, while Joyce ran day-to-day operations, ordering parts, and doing the books.

Fiore’s son, Michael, started working for the company after school and on weekends at the age of 13, starting out with electrical work and helped his father test boats. When Michael graduated high school in 1987, the 17-year-old worked at Hustler full-time as shop foreman, running production, testing, and taking care of boat deliveries.

By 1984, Hustler relocated to a former marina in Hampton Bays, Long Island. The Fiores were looking at building a bigger boat, a 40-footer. More research was in order. After speaking with a professor at the famous Webb Institute, Fiore hit him with the idea of doing something different in hull design.