A luxury performance boat that tops 130 mph and has the champagne chilled when you arrive at your destination, the Predator 447-R is an alpha offshore go-fast

Ben Robertson Jr. took his parents along for the ride when he drove the Predator Boats 447-R from his headquarters at BAR Marine in Jacksonboro, S.C., to the Charleston Boat Show. Charleston Harbor can get bumpy and 88-year-old Ben Robertson Sr. was shocked when he looked over and saw that they were running 130 mph.

“He said, ‘I didn’t even know how fast we were going until I looked over at the speedometer,’” Ben Robertson, Jr. said. “The boat handles well. It does everything it’s supposed to do. It’s not a raceboat, it’s as fast as anything out there and it handles.”

Following the Miami International Boat Show, Robertson Jr., took the 447-R on the Florida Powerboat Club’s Miami Boat Show Poker Run. The former Formula 1 world champion and offshore racer knows how to get the most out of a boat and he knows the value of making a statement. “We outran everyone,” he said. “I had a lot of compliments on the boat.”

The first Predator model that Robertson has had in the United States is the 447-R that he has been using for demo rides at boat shows and other events. It is powered by staggered Mercury Racing 1350s with M8 drives. The boat will run in the mid-130s with 200 to 300 gallons of fuel on board and Robertson said it will push 140 mph when it’s light on fuel. Pricing with the 1350s starts at $896,000. The next boats will be outboard and stern drive versions of the 337 Center Console.

Predator was launched in 2009 by company president Andree Bakkegaard. He had worked at Nor-Tech Boats in Cape Coral, Fla., learning the trade before returning to his native Norway to start Predator. Nor-Tech president Trond Schou is also originally from Norway.

The 447-R’s bottom was designed by Bakkegaard. It’s a four-step design with a notched transom and a pad in the keel. Much like the Nor-Techs he worked on, the Predator isn’t designed to be the fastest boat on the water, but it is intended to be a solid overall performer. “It’s not a boat that gets up and walks,” said Robertson. “You don’t have to steer it. It just goes.”

Predator Boats builds the 447-R with a carbon-fiber Kevlar laminate and the transom and stringers are cored with composite linear foam. It’s no lightweight, tipping the scales at 15,500 pounds. The boat measures 46’ long with a 9’ beam and has a fuel capacity of 383 gallons. Belowdecks, it has a full cabin with a private V-berth in the bow, standup headroom in the salon and a full galley and head. Among the luxurious accouterments on the boat include a champagne chiller and custom-engraved stemware. The champagne flutes travel in racks that are built on shock absorbers.

In the cockpit, the Predator Boats 447-R has side-by-side bolsters with dual steering wheels at the helm and three individual high-backed bucket seats aft. Robertson said he gets more questions about the twin helms than any other feature. “I tell people they’re for your wife to take over driving when you’re not going where she wants to go,” joked Robertson. The dash has a Raymarine chartplotter in the center with analog-style Livorsi gauges with a Mercury Racing VesselView screen to starboard and digital Livorsi trim indicators to port. The shift and throttle controls are in the starboard gunwale so if two people want to run the boat, the driver would steer from the port helm. A wraparound windshield protects everyone in the cockpit from the elements—and help keep them from realizing they’re running 130 mph. 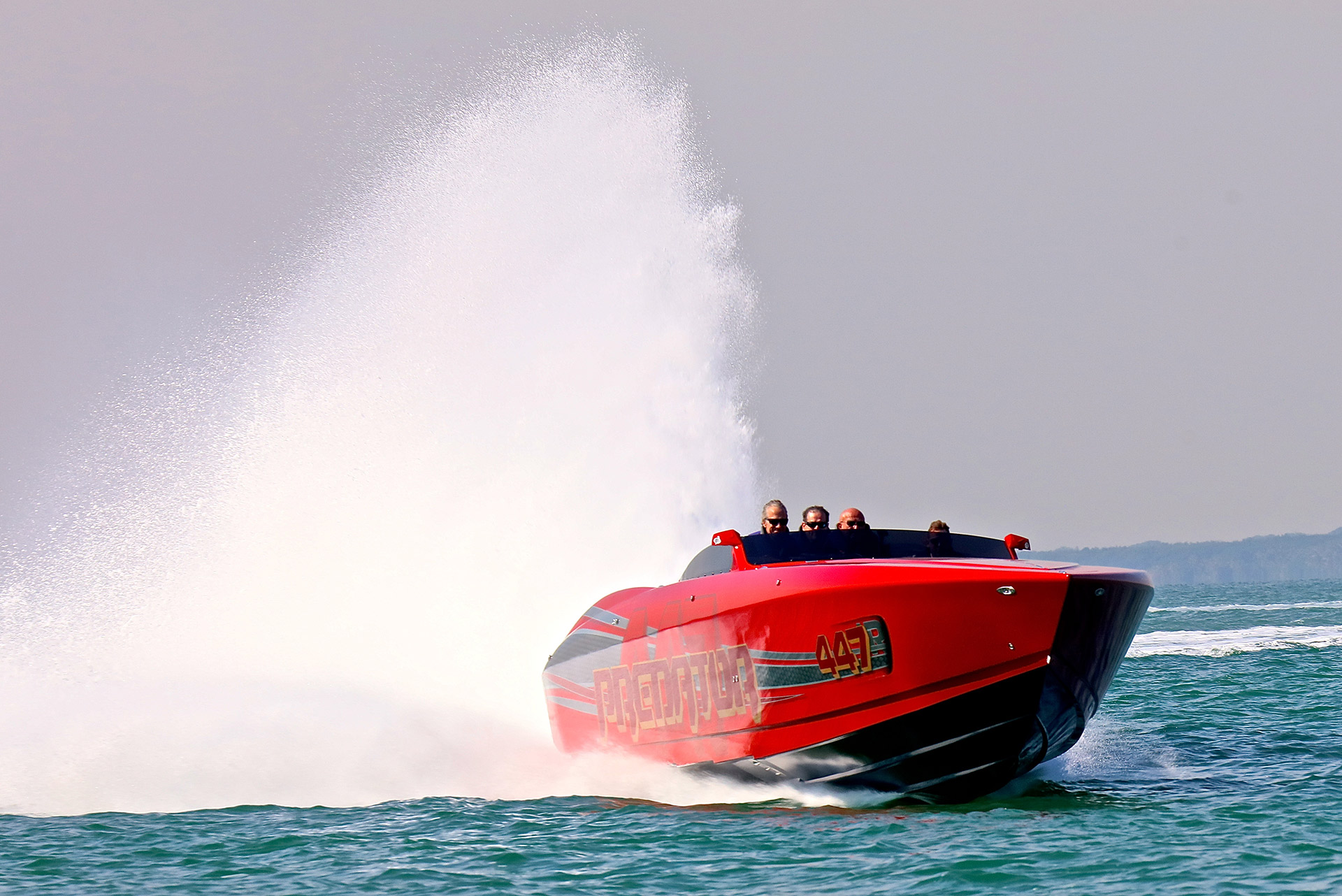 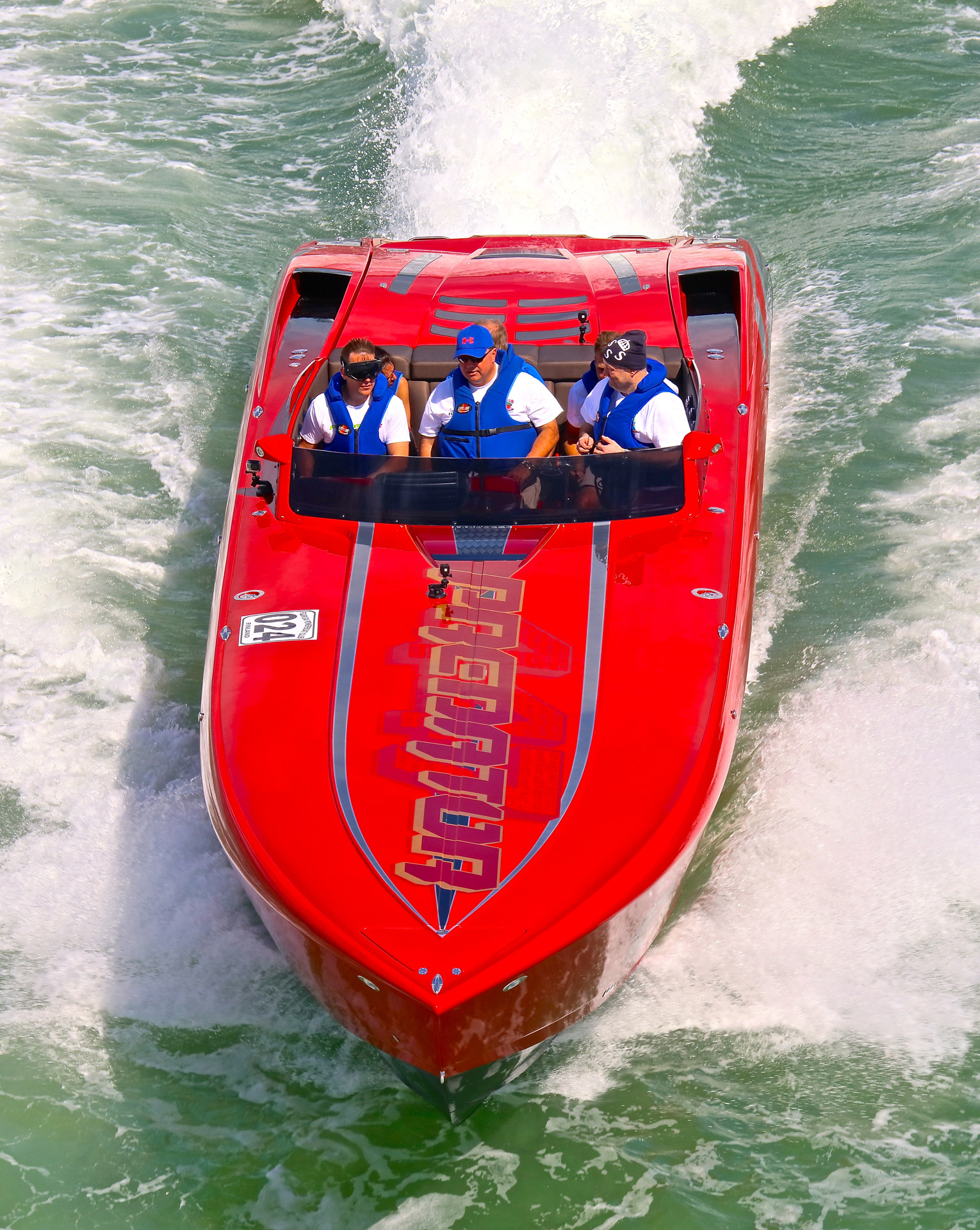 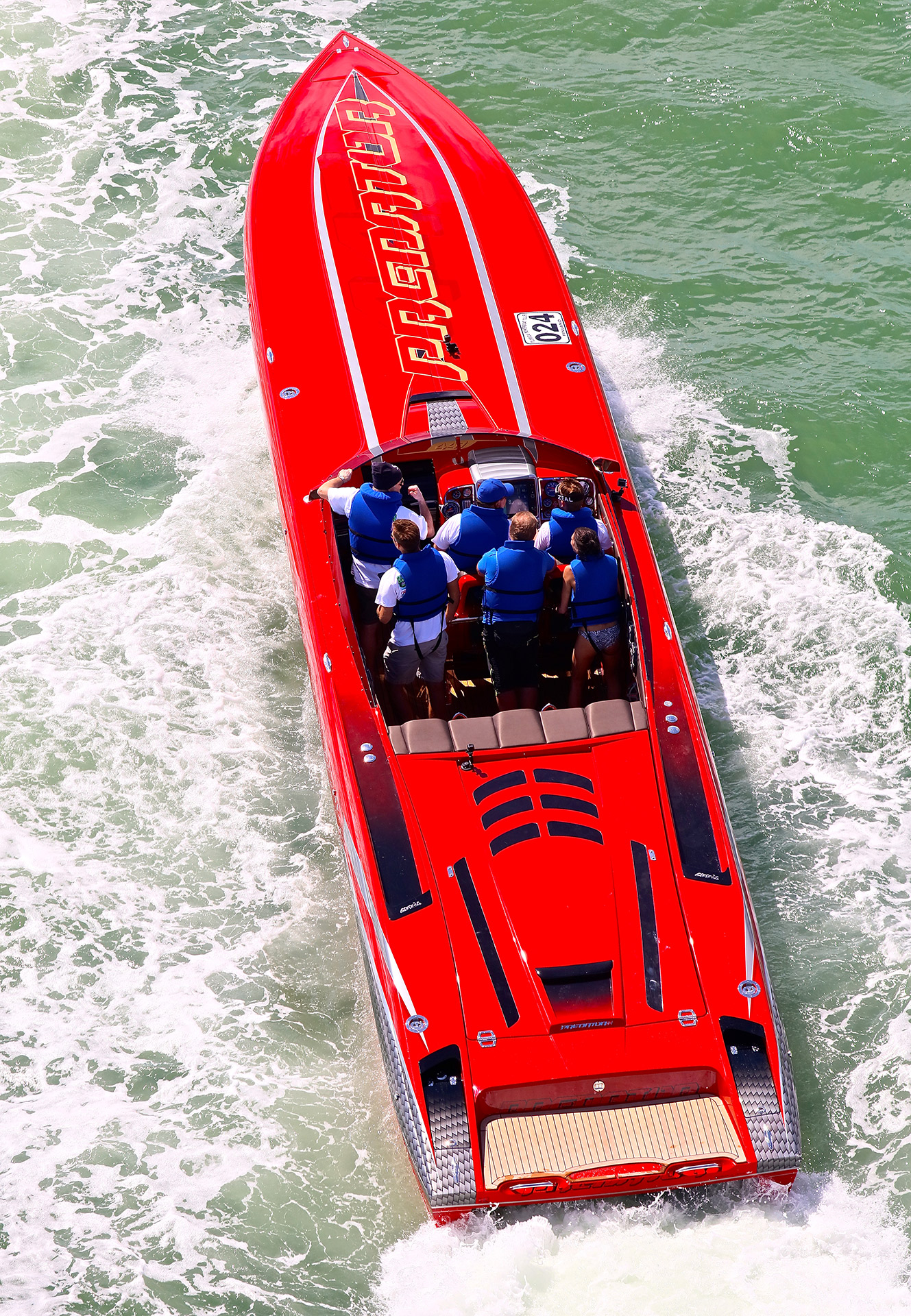 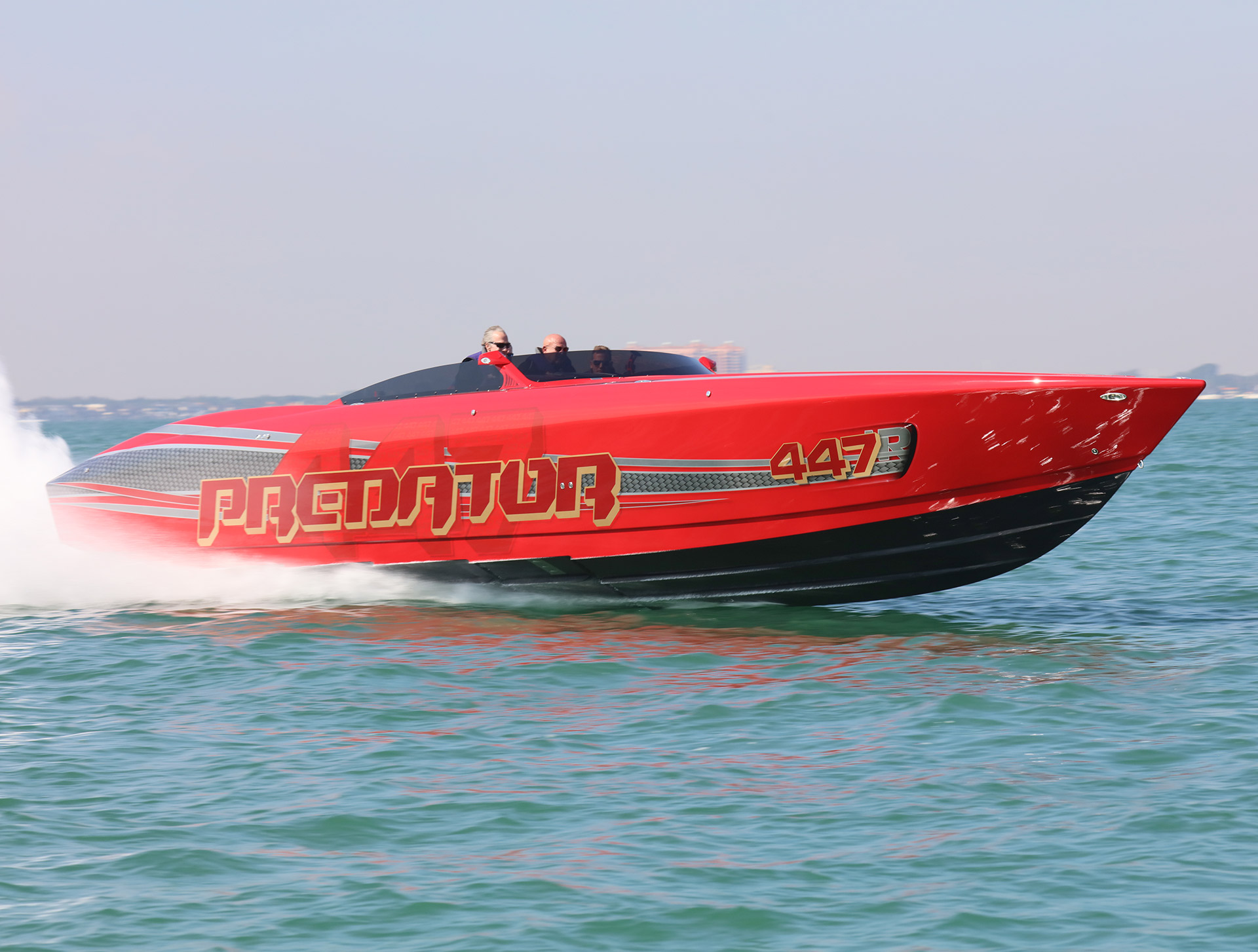 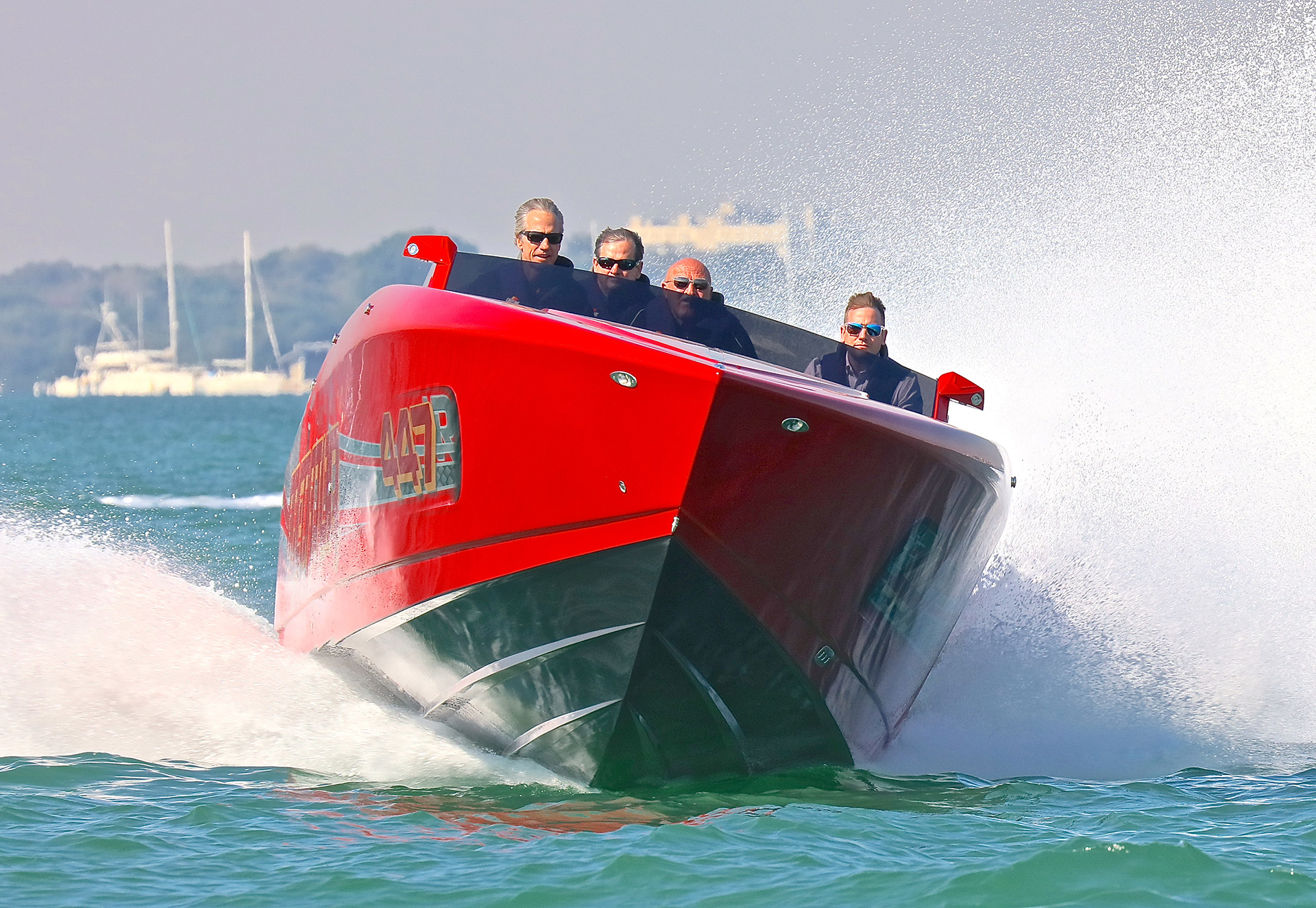 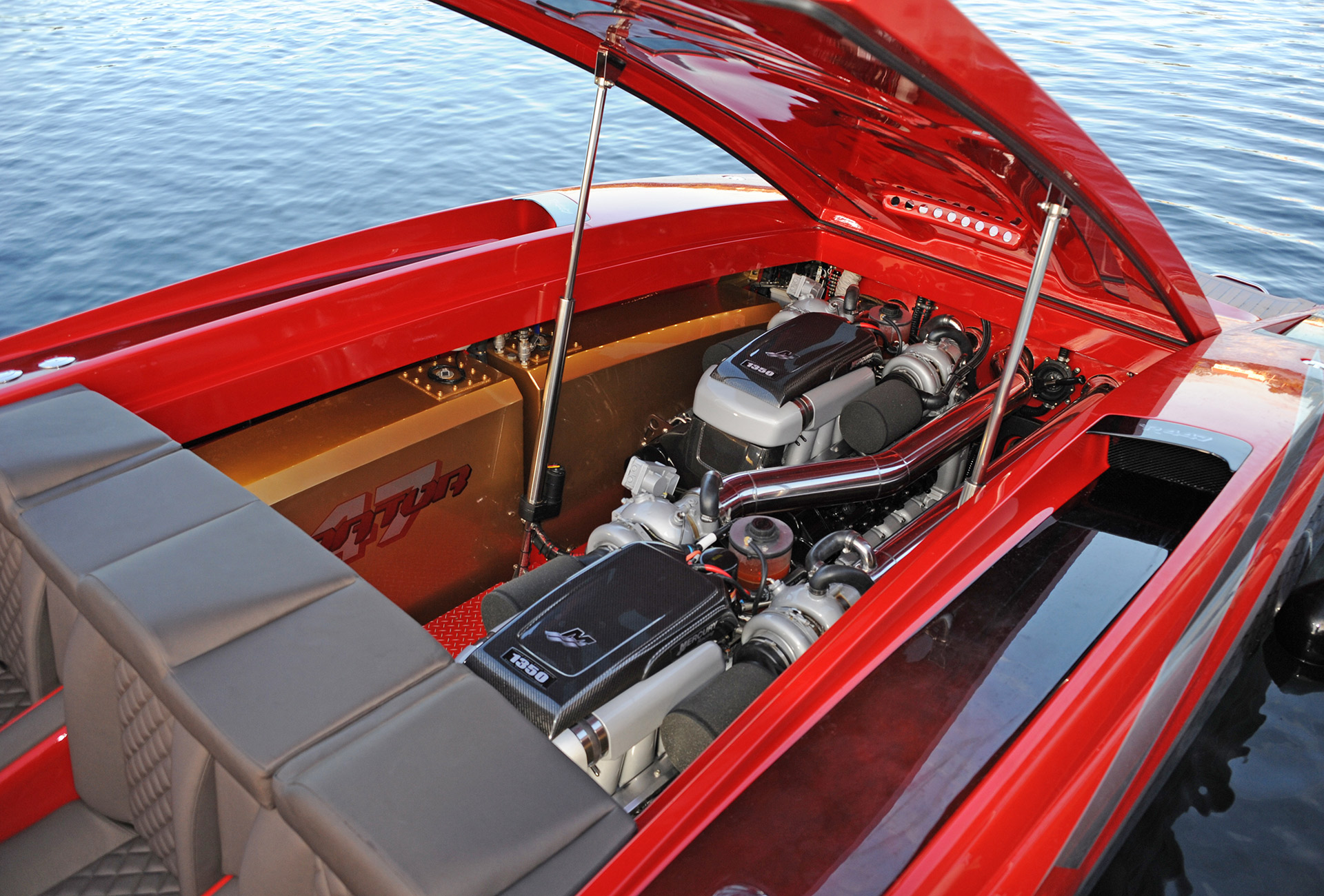 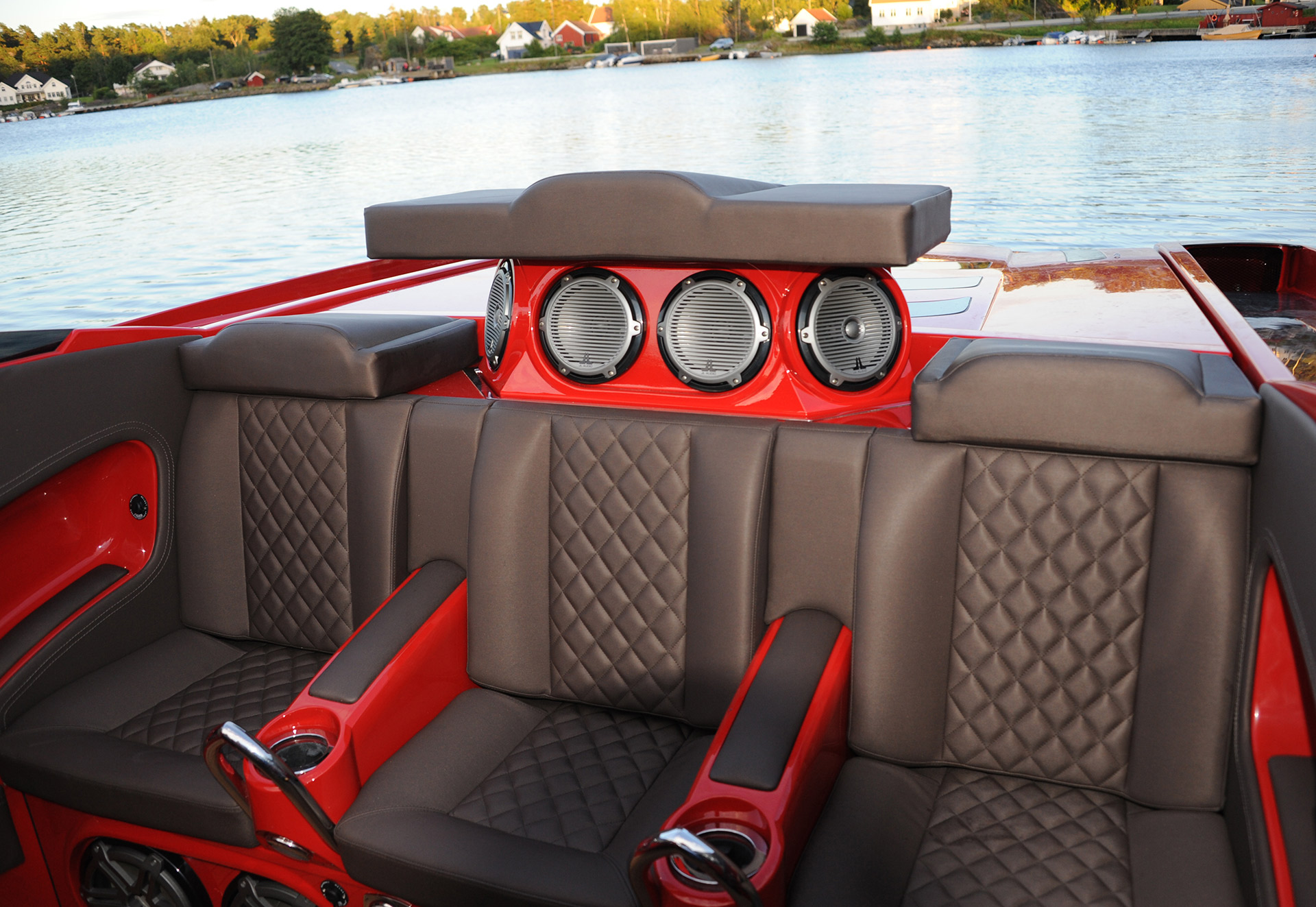 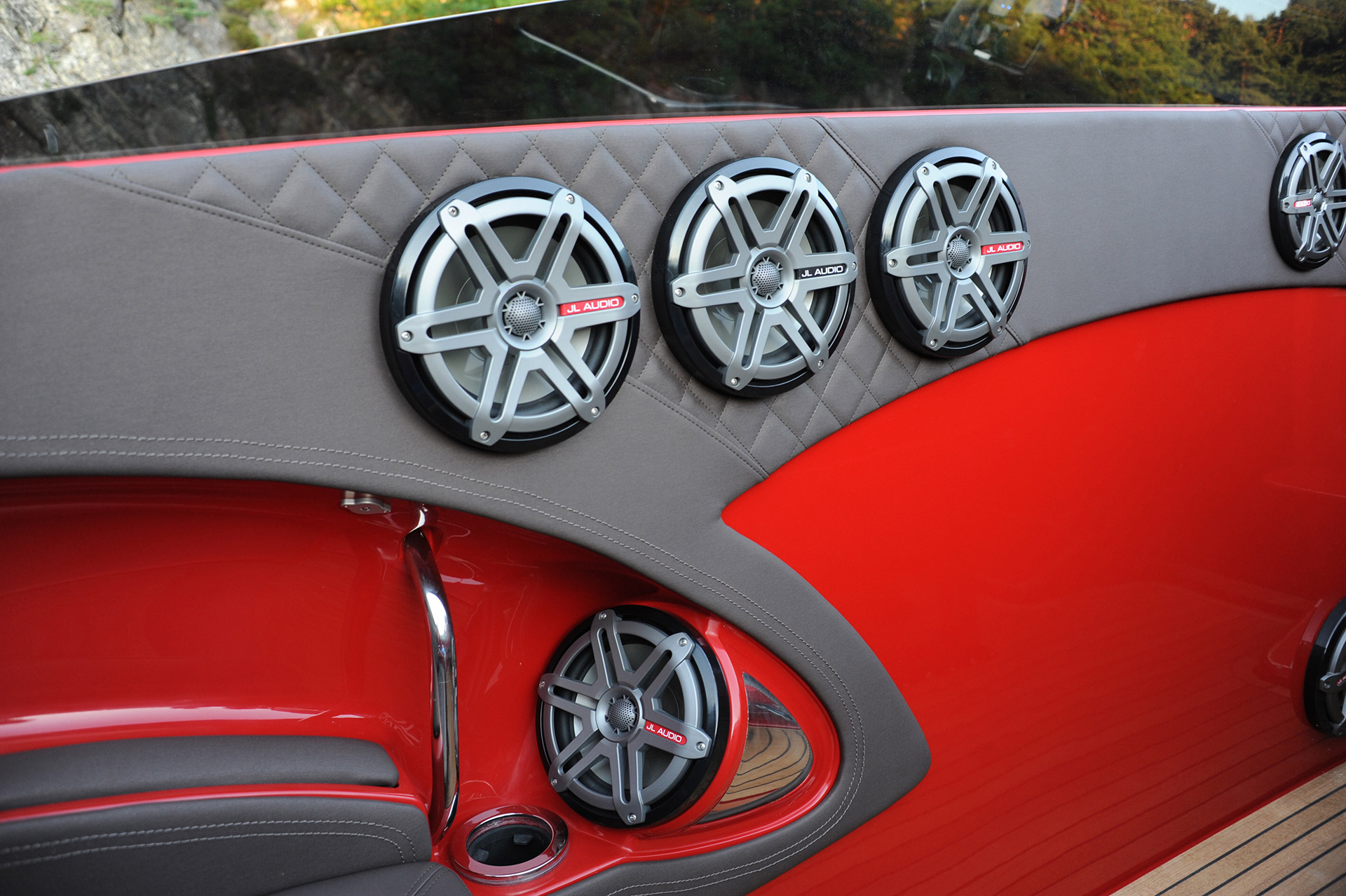