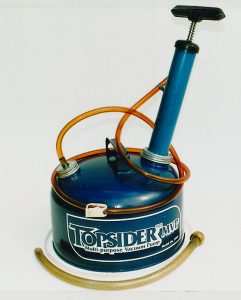 Boaters consider fall in the north country, when the leaves are turning and the tourists have gone back to wherever they came from, to be the most enjoyable time of the year on the water and it is. But if you do your boating where the lakes and rivers freeze over in the winter, it’s time to think about laying up your boat until spring.

Boats taken out of service for several weeks in areas where temperatures will go below freezing, must be carefully prepared to prevent engine or drive damage.
Preparation for this should begin the last time the boat is used by adding the recommended amount of fuel stabilizer to the fuel. Using the boat after adding the stabilizer assures thorough mixing with the fuel.

If the boat has been in the water for several weeks, as soon as it is removed from the water, the bottom from the waterline down and the drive must be cleaned. The accumulation of algae is very difficult to remove if allowed to dry. If a pressure washer is not available, use a good bottom cleaner and brush.

If the oil and filter were not changed while the boat was in the water, a flushing device must be attached and the engine run on a hose until it reaches operating temperature. 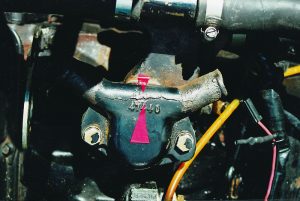 Place the drive in the down position, remove the propeller to prevent interference or possible injury and store it. If there is a freshwater
flushing attachment, the hose can be connected to it. Turn the water on before starting the engine and be sure there is a sufficient flow of water to the engine before it is started (some garden hoses are too restrictive). The water pump impeller can be damaged and the engine overheated within seconds without an adequate water supply.

Again when refilling the crankcase add engine oil supplement then run the engine at fast idle for a few minutes to circulate the fresh oil and supplement throughout the lubrication system. Check for leaks around the new oil filter while the engine is running, then shut it off, wait five minutes or so and check the oil level, add enough to bring it up to the full mark if necessary.

On carburated engines, remove the flame arrestor, restart the engine and run it at fast idle while pouring or spraying fogging oil into the carburetor and shut the ignition off immediately. Clean the flame arrestor with solvent and blow it out with compressed air before reinstalling it.

If the engine has a standard cooling system remove the exhaust manifold, riser, elbow and engine block drain plugs from both sides of the engine. To be sure all the water drains out, probe the drain holes or petcocks with a wire or cable tie. Sludge or rust can accumulate in the bottom of the water jacket and plug the drain hole preventing all the water from escaping.

Occasionally, there is a layer of mud-like sediment in the bottom of the water jacket. Antifreeze doesn’t mix with this material and if it gets cold enough the sediment freezes and cracks the block. Remove the drain plug from the power steering oil cooler if so equipped; if there is no drain plug remove the coolant hose. 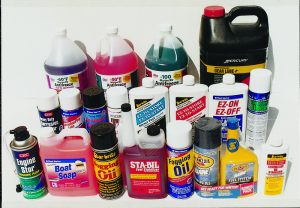 The object is to make sure there is no water trapped anywhere in the cooling system. After all water has been drained from the cooling system, put pipe sealer on the drain plugs (unless they are the plastic ones with an “O” ring) and reinstall them, then reconnect all hoses. Remove the thermostat housing and fill the engine with antifreeze, replace the housing with a new gasket. Disconnect the hoses at the thermostat housing which go to the bottom of the exhaust manifolds. While holding each one individually as high as possible, pour antifreeze in until it comes out the exhaust (if the existing hoses aren’t long enough use a longer hose for this operation), then reconnect the hoses to the thermostat housing. Leaving the engine dry invites rust, filling it with rust and corrosion inhibiting antifreeze protects the engine.

Important: If you have a high-performance supercharged engine equipped with an intercooler, remember, the intercooler is not drained with the engine. You must disconnect the water supply hose where it enters the intercooler, then attach another hose and holding it up pour antifreeze in until it comes out of the intercooler discharge line the same color as it is going in. Check the supercharger oil level at the plug on the front of the case, if low, fill it to that level with 90-weight gear lube.

If you have a sea strainer it also must be drained. Some have a drain plug, on others the bottom hose must be disconnected to let the water out and reconnected. Then fill the sea strainer with antifreeze and put the top back on. If the boat is equipped with an extension box or boxes between the transom and drive be sure there is no water trapped in it. If it doesn’t have a drain plug, Stellings recommends drilling a hole with a cordless drill in the bottom of the box at the lowest point and about an inch-and-a-half from the transom to let out any water. Then tap the hole for a pipe plug and install one, now you can drain the box at any time. The newer boxes will have this plug installed from the factory.

During winterizing it is a good time to inspect all belts, wires and hoses. Replace any that are cracked, worn, chafed, soft or bulged. Replace the distributor cap, spark plugs and ignition wires if necessary when recommissioning the boat. Some manufacturers recommend removing the valve covers, wiping out any condensation on the underside, around valve springs and rocker arms and spraying with lubricant then replacing the valve covers with new gaskets.

If you have a high-performance engine this would be the time to manually turn the crank to bring number one cylinder to the firing position and back off all rocker arms that are holding valves open, thus sealing the combustion chambers (this procedure was explained in a previous issue). Place a tag in a conspicuous location explaining what has been done so no one will try to start the engine without readjusting the valves. Clean and degrease the engine, apply touch-up paint as needed, spray corrosion inhibitor on the engine and all metal parts, wipe off any excess.

To prevent moisture from entering the intake system cover the flame arrestor and carburetor or throttle body with a plastic bag and secure it in place. Keep moisture out of the

exhaust system by taping the exhaust outlets closed. If you don’t have the proper equipment you might want to have a marina perform some or all of the following operation. Drain the drive and if it hasn’t been off for a year or more, remove it. Check the universal joints for wear and the bellows for cracks, replace if necessary. If they are in good condition replace the “O” rings, grease the universal joints, engine coupling splines and shift linkage, replace the drive, using new “O” rings between the drive-shaft housing and bell housing, fill the drive with new gear oil and fill the gear lube monitor in the engine compartment to the full line.

If the boat is equipped with a transmission, drain and replace the transmission fluid. Lubricate all grease points: gimbal housing swivel shaft, swivel pin, hinge pins and gimbal bearing, trim/tilt, power steering control valve, steering cable grease fitting, extended portion of steering cable and control cables, then touch up any nicks or scrapes and coat the drive with a corrosion preventive spray. The battery should not be left in the boat. Remove it, put tape over the vent holes and clean it with a water and baking soda solution, then rinse with water. Add distilled water to the electrolyte in each cell to bring it up to the indicated level if necessary, coat the terminals with petroleum jelly and store the battery in a cool, dry location. Every month or so, check the electrolyte level and slow-charge the battery for a few hours at five or six amps to keep it fresh.

Holding tanks, water heaters, wash bowls, showers, freshwater tanks, filters pumps, bait wells, live wells, air conditioners, generators and heads, if any have to be drained and flushed with non-toxic propylene, glycol-based antifreeze. Before recommissioning, add water freshener/purifier tabs to the freshwater tank to remove residual odors and condition newly-added water. And that’s all there is to it. By taking steps to protect your boat now, it will come through the winter in perfect shape and be ready to go as soon as the ice comes off.