Florida’s Tim and Cyndee Hill are two of the busiest promoters in the marine industry.

When attending an offshore race or a poker run, fans have expectations for an event. Access to the venue should be easy with short lines and a fun atmosphere.

To create the experience, a promoter has spent up to a year behind the scenes securing permits, finding sponsorships and hiring security and caterers. Think of it as throwing an outdoor party for thousands of friends and you are in charge.

Two of the busiest event promoters in the marine industry are the Hills, a Florida couple who produces the Roar Offshore National Championships and Roar Offshore Poker Run in October as well as events for the Fort Myers Offshore (FMO) powerboat club. Tim and Cyndee Hill will finish the year organizing more than a dozen events.

It’s a labor of love for the couple, who have full-time jobs outside of putting on events year-round.

“Nothing that we do in regard to powerboats pays the mortgage,” Tim Hill said with a laugh. “It consumes most of our lives, but doesn’t it pay for anything.”

The Hills got into organizing events when Tim took over as president of Fort Myers Offshore in 2019. Like most powerboat clubs, the group holds lunch runs and overnight events with Tim and Cyndee handling the logistics.

As the club membership has grown, the Hill’s success caught the attention of offshore race organizations looking to race in the sunshine state. The couple was asked by Offshore Powerboat Association (OPA) to stage an offshore race off Fort Myers Beach, where they had not raced in 13 years.

“They asked if we’d be interested in producing an offshore race and we thought, ‘We do eight runs a year with FMO, how difficult can it be putting one race on?’” Tim said. “Boy, that was a rude awakening.” 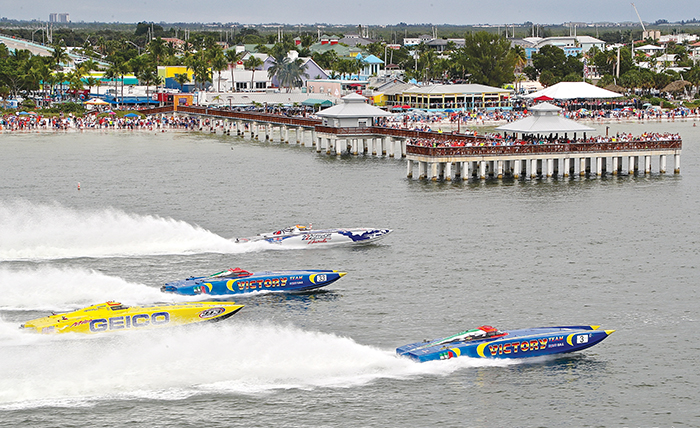 Most people are familiar with promoters in the concert business such as Live Nation or AEG Presents. The same goes for staging an offshore race with a local person or group serving as a promoter. The promoter pays for the event from the security at the entrance to the cranes in the pits, as well as appearance fees to the competitors.

Promoters bring in revenues through sponsorships, ticket sales, parking, hospitality tents, vendor space, and food and alcohol sales. Outdoor events, such as boat racing, are at the mercy of Mother Nature and a rain out can come at a significant lost for the promoter.

The Hills lost about $20,000 on the first offshore race they promoted in 2019 but have been on a winning streak since. They launched Roar Offshore Poker Run, which last year raised $14,000 for the Fort Myers Beach Lions Club.

“I was really hesitant to move forward and put the race on in 2021 because we don’t have deep pockets,” Cyndee said. “But it worked out.”

The Hills were in the midst of a 52-day road trip, logging more than 5,000 miles in a Chevrolet Corvette when Poker Runs America caught up them. The adventure mixed business trips with their support for the races on Lake St. Clair, Mich., and Michigan City, Ind., as well as attending the Boyne Thunder Poker Run in Michigan.

Both Cyndee and Tim met while traveling. He was attending an automotive trade show in Las Vegas and Cyndee was in town on a layover while working as a flight attendant. Two weeks later, they attended their first poker run together in Cape Coral, Fla., with Cyndee flying overnight from Alaska to attend.

A few months later, they attended the World Championships in Key West, Fla., and it was the first time Cyndee attended a powerboat race. Her family had smaller boats but didn’t know offshore racing existed.

“I was just floored, jumping up and down like a little kid and since then I was hooked,” said Cyndee who married Tim three years later. “If you would tell me now that I’d put on one of those races, I wouldn’t believe you.”

Organizing events for the Fort Myers Offshore club, helped pave the way for the Hills to promote events separate from the club. The club holds the same events on the same weekend each year, but it gives them insight on how to organize successful large-scale events.

The club’s mission is to provide academic scholarships for graduating high school seniors. Because the club hosts multiple events over the year, it can lose money on an event or two and still be profitable for the year. That’s not a luxury the Hills have with just two independent events.

In bringing back the Fort Myers offshore race after more than a decade, there was strong community support for the event, but local sponsorships have been tougher to get as the Hill’s events have become more successful.

“We wondered why the race ever went away and a lot of people said, ‘They couldn’t get the funding,”’ Tim said. “We were told people will start to say, ‘The races will be here, whether we fund it and support it or not.’ But without the support of our sponsors and local community, we just can’t put on the race.”

Before the racers hit the water in October, the Hills will have spent hundreds of hours organizing before even showing up to the race site. The permit book is more than 200 pages with at least 11 permits required from local, state and federal agencies. Cyndee will start planning for the 2023 race in November.

The Hills believe their success at running events is listening to its sponsors and fans, while working and learning from other promoters staging offshore races. On their six-week road trip, the Hills visited other race sites and met with the race teams that will be at their event in October.

“The race teams and our sponsors are our customers, and we want to cater to them and want them to love our event,” Tim said. “The race teams really appreciate our involvement, and we treat them like they’re our family and to make sure Fort Myers is the best race that it can be.”

Staging large events can be exhilarating and exhausting as the Hills learned when they organized the OPA National Championships and Roar Offshore Poker Run back-to-back weeks (they’ve since spaced out the events).

“We were absolutely worn out and we said we’ll never do that again,” he said.

As most promoters learn, there is a point during an event that they can relax and enjoy the fruits of their labor. For the Hills at their first National Championship event in 2019, they went to the 10th floor rooftop to watch from race control where they could see the entire racecourse.

“Once the checkered flag dropped and everybody was safe headed into the pits, Cyndee and I just looked at each other and started crying and gave each other a big hug,” he said. “It was super emotional. I have to say it’s been like that every year since as well. Once everybody’s safe and accounted for and the races are over, we just break down from exhaustion from what we accomplished.”