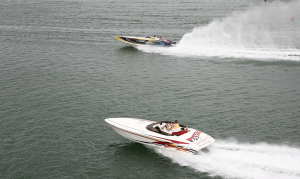 Virtually every poker run around the country has a charity that benefits from the event, but few have as direct of an impact as the Hartwell Lake Poker Run Benefitting Meals on Wheels—Anderson in South Carolina (www.hartwelllakepokerrun.com). The poker run, which will be held on June 22-24 weekend in Anderson, S.C., is the primary fundraiser for Meals on Wheels in that community. The program does not receive state or federal funding and it provides a valuable service for the elderly in Anderson, delivering food Monday through Friday for homebound elderly residents of Anderson and frozen meals for the weekends.

“Last year, we netted about $56,000,” said Meals on Wheels Anderson Executive Director Laurie Ashley, who is also managing the poker run this year.

The Harwell Lake run started in 2010 and has grown to more than 200 boats in 2016 with 206 official entries. “We have everything from 18’ runabouts to million-dollar catamarans,” said Ashley. This year’s title sponsor is Campbell Crane Rental, Inc., and Ashley said Old Stone Tractor is providing a great deal of support as well. Because many local boaters like to participate, the run is open to all boats and the entry fee is only $75. “We like to keep it reasonable because we have a lot of local people who come out and enjoy and support us,” Ashley explained. Because the lake borders South Carolina and Georgia, participants from both states enjoy the weekend. Meals on Wheels also gets support from law enforcement from both states for the poker run. 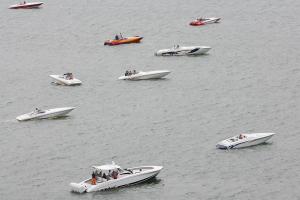 The weekend kicks off with a street party on Friday night where all the participants can get together and check out the boats. Local restaurants will provide food on Friday and Saturday and the Eric Scott Band will entertain the crowds both evenings.

Because of the size of the event, Ashley did say that officials are considering an open start where boaters can run to a card stop of their choice instead of having everyone move as a fleet around the lake.