A virtual reality component to the upcoming movie profiling the life of Don Aronow, Speed Kills, has been released.

Speed Kills Cinematic Virtual Reality Experience drops viewers into the middle of moments from the film, including boat racing and drug running. The VR experience has eight ‘episodes’ running about nine minutes in length.  The VR app also includes a sneak peek at the film’s theatrical trailer. 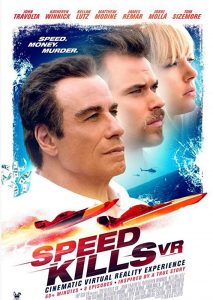 The VR Experience was shot alongside the filming of the movie by TopDogVR.  In total, TopDogVR says the experience has approximately 60 minutes of “story-driven VR.”

Speed Kills is scheduled for a theatrical release later this year.  The Speed Kills Cinematic Virtual Reality Experience is available for download on the Google Play Store, iOS App Store, and Oculus Rift.

Check out the trailer for the VR experience and watch a sneak peek at one of the episodes below: