A Boater’s Paradise on Both Sides of the Border 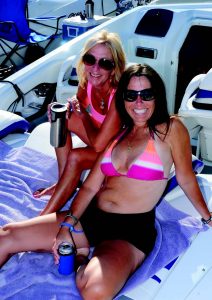 Each summer, the 1000 Islands region of Canada, which stretches from The Bay of Quinte to Prescott, Ontario, entertains thousands of visitors from around the world, as well as locals who know the beauty of the area. But one event in August stands out as the premier attraction for performance boaters, the 1000 Islands Poker Run Kingston, which is staged by Poker Runs America/ Powerboating Canada the Ontario Ministry of Tourism. Last year it was held on the weekend of August 7-8 and in 2016, it will take place August 19-21.

The 1000 Islands (pronounced “Thousand Islands” not “One Thousands Islands”) region is a powerboater’s paradise and is a popular destination located along the peaceful shores of northern New York in the United States and southern Ontario, Canada. There are areas of where you can see more than 100’ down. In days gone by these waters were patrolled by fierce pirates and today, poker runners from across the globe have plied the waters of the St. Lawrence Seaway. Our own editor Eric Colby drove the Skater 36, Flight Club, at a speed of 172 mph in the run on these waters and said his time behind the wheel of that boat is one of his fondest memories in a career that stretches over 30 years.

Last season, the 2015 Kingston 1000 Islands Poker Run came hot on the heels of the popular Alexandria Bay Poker Run that was held in upstate New York a few weeks earlier. The Kingston 1000 Islands event, however, is more than just a poker run. It’s a festival hosted in conjunction with the City of Kingston, Ontario, and surrounding region that attracts people from across North America and around the world.

Powerboating celebrities from both sides of the border brought some of the world’s best-known aquatic speedsters including the world champion, Aquamania, and the famous Canadian turbine-powered Mystic catamaran, My Way. The fleet included a variety of performance boats including Outerlimits, Cigarette, Fountain, Skater, Nor-Tech, MTI, Spectre, Sunsation, Baja and more. The flotilla numbered more than 70 boats.

The weekend kicked off Friday night with the boats on display in Confederation Park and the surrounding streets in downtown Kingston. Fans were in awe of Bill Tomlinson’s turbine-powered Mystic catamaran, My Way, and Patrick Higgins’ enclosed-cockpit Outerlimits, Go Fast Energy Drink, which took up half the block with its support trailer. Fast Eddie Como and his turbine-powered 50’ Airborne catamaran thrilled the crowd as did Como’s monster trucks. Cole Leibel displayed his 36’ Skater, Wild Cat as well.

As the evening progressed, the players made their way to the Poker Run Meet and Greet Party at the BluMartini Restaurant and Grill where many of the participants enjoyed cocktails and hors d’oeuvres. Some poker runners called it an early night while others enjoyed the Kingston nightlife, mingling at the various pubs and restaurants.

On Saturday morning, the boat drivers gathered for the mandatory driver’s meeting at Kingston’s City Hall. Officials went over the rules and regulations of the run and gave directions to the first card stop. Then the crews headed to their boats to await the official order, “Gentleman Start Your Engines.”

Fans who can’t get out on a boat can see all the action in the Speed Zone Theater, an airconditioned tent in Confederation Park that showed video highlights from the run and other intriguing footage. To watch the replays of the boats’ starts check out our web-site. www.pokerrunsamerica.com/events.

With the drivers getting anxious, spectators lined the shoreline of Confederation Basin to catch all the action. When the green flag flew from the Poker Runs America paceboat, drivers nailed their throttles and blasted their way to Brockville to draw Card 2 and enjoy lunch.

Hardy Park once again played host to the annual Brockville Ribfest, where the poker runners enjoyed lunch. Always a highlight on this run, Brockville attracts thousands of spectators every year to catch all the action. Following their lunch of award-winning ribs, the players mingled and prepared for the next leg of the run.

This year, after picking up Card 3 in Prescott from a card boat, the fleet made the return trip back through Brockville at full throttle, dazzling the crowds once again before returning to Kingston and the unveiling of the cards at the awards banquet.

The City of Kingston rolled out its red car-pet and allowed us to use the main banquet facility in Kingston City Hall. This served as an excellent venue with its sheer ambience. A full bar and dinner consisting of steak and jumbo prawns, plus wine from Sandbanks winery was the perfect way to end a great day on the water.

Following dinner, participants had the opportunity to check Chris Mastronardi’s Outerlimits and red tow rig as they congregated in Kingston’s Springer Market Square for the unveiling of the cards. Complete with the Jumbotron screen provided by the City of Kingston, the winners were announced larger than life as the public got a chance to see the draw up close.

As exciting as the 1000 Islands event was in 2015, in 2016, there will be even more bragging rights on the line. A new award, the King of the 1000 Islands will be presented at this year’s event. To qualify, a candidate must participate in the Alexandria Bay Poker run in upstate New York on July 22nd weekend and the Kingston 1000 Islands Poker Run on August 19-21. There will still be a winning card hand drawn at each individual event, but the King of the 1000 Islands will be the person with the best combined card hand of the two events. Players who drew cards in both events can mix and match to get the best hand no matter how lousy their original hands were. 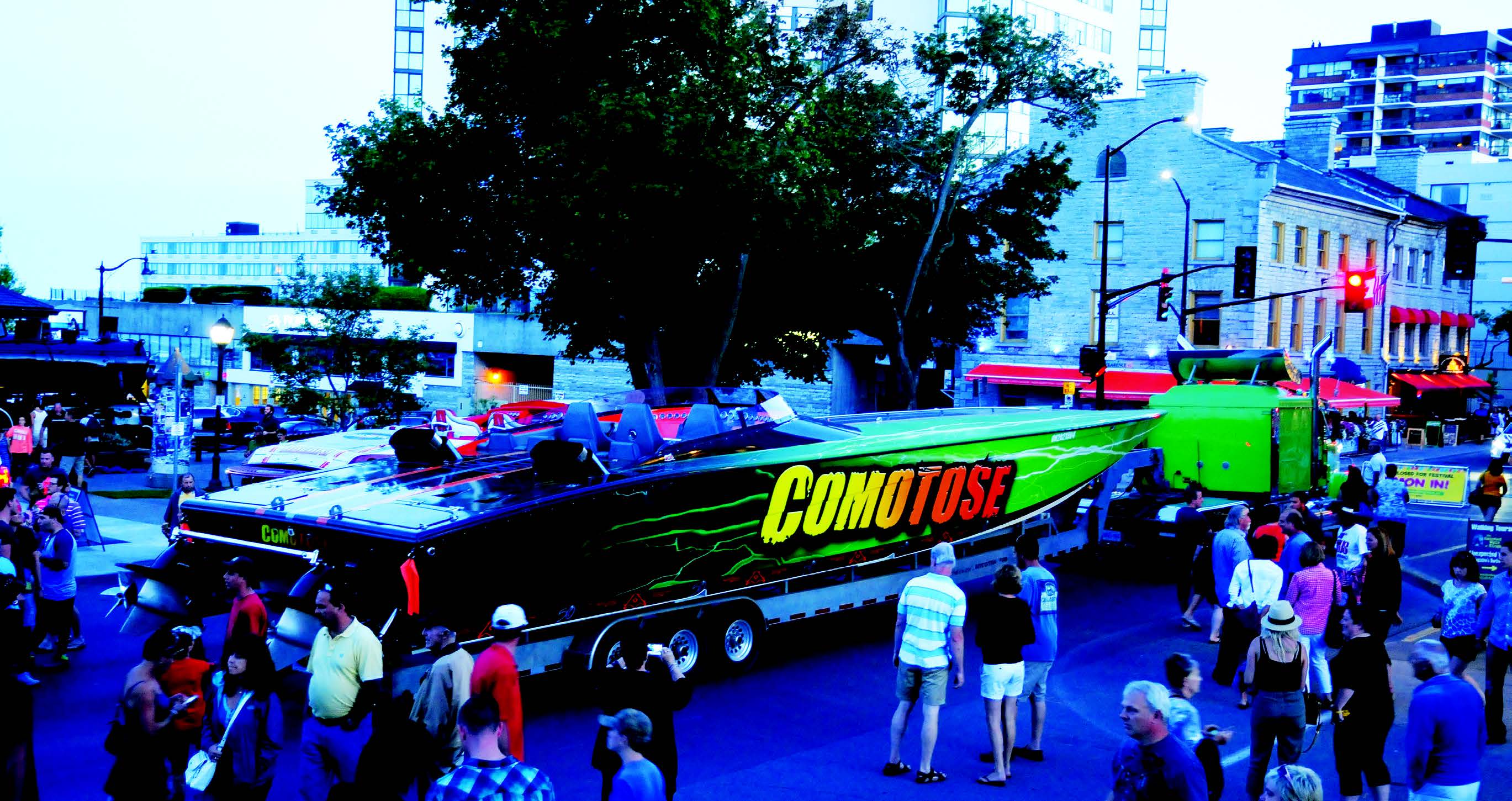 The 2016 event in Alexandria Bay on July 22 to 24 weekend will have the boats on display on land on Friday night followed by the poker run on Saturday with dinner at the Edgewood Resort. A special shootout to raise money for the Wounded Warriors charity will take place on Sunday just a few minutes from Alexandria Bay. There will be a Show and Tell event in Clayton, N.Y., where the public can come see the boats on land and meet the drivers before they take to the water and do a flyby pass off the village pier.

Now let’s see who the big winners were at the 2015 1000 Islands Poker Run. Taking first place with a straight was Alex DeCristoforo who participated in the event in his 35 Donzi. Second place went to Benny D’Angelo, who drew three Queens. D’Angelo made the trip from St. Remi, Quebec to participate in this event. Triple eights were good enough to put Martin Falardeau in third place. He ran in his 36 Outlaw. A pair aces put Ken Webster in fourth place and one card made the difference between fifth and sixth. Chris Lamer had two queens and a king to sneak ahead of Sam Singer of New York who had two queens and a jack.

If you’re planning a vacation on the water near the U.S./Canadian border, you will not want to miss the weekend of the Kingston 1000 Islands event, which will be held August 19-21, 2016, which is a few weeks after the Alexandria Bay. Remember, after participating in the two events, the poker runners will be vying for “The King of the 1000 Islands” title. Hosting such an event takes months of planning, hours of meetings, more than 80 local volunteers to make it all happen and a host of sponsors. We thank all of the following sponsors for their support: