It was just early last year when Poker Runs America put together an agreement to purchase one of the most popular poker runs on the poker run circuit. Originally created, owned and operated by event producer Jeff Jennings for several years, The Rock the Bay run is a very successful event and has dominated the waters of Chesapeake Bay for more than decade, bringing excitement to hundreds of performance boaters.

It was just early last year when Poker Runs America put together an agreement to purchase one of the most popular poker runs on the poker run circuit. Originally created, owned and operated by event producer Jeff Jennings for several years, The Rock the Bay run is a very successful event and has dominated the waters of Chesapeake Bay for more than decade, bringing excitement to hundreds of performance boaters.

After Jennings approached Poker Runs America last winter to take over this acclaimed event, it was only a natural move for president Bill Taylor and his team to take on the event since Poker Runs America magazine reaches more than 30,000 performance boating enthusiasts every issue. 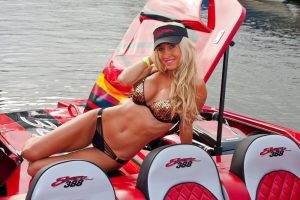 Following months of planning new concepts and initiatives to take the run to new heights, it was an unanimous decision to bring another popular poker run into our fold and introduce a new element. After approaching Victor DiMarco of DiMarco Marine Performance, who produces the popular Thunder in the City Poker Run in Chesapeake City, MD (and held weeks prior to Rock the Bay), both organizations devised the coveted Champion of the Chesapeake Title, which consisted of comparing the two top hands from each event, and the player with the highest hand would and claim the title.

A new concept that brought more notoriety to Rock the Bay, promotion was strong and anticipation among the players was at an all-time high. In the end Tom Meshinsky of Long Beach Island, NJ, played a strong hand consisting of a Four-of-a-Kind, Kings High (with a Nine) taking the winning hand of the event. As luck would have it, Meshinsky was also the winner of the Thunder in the City Run, automatically qualifying him as Champion of the Chesapeake! “I never get a good set of card hands,” said Meshinsky following the event. “I have been to approximately 25 poker runs and this year I finally got lucky. This is a great win for me. This event was a lot longer than other poker runs I have attended recently,” explained Meshinsky. “Some runs these days don’t have the five card stops like they used to, they just run to point A to point B. I like the concept of going from card stop to card stop.” 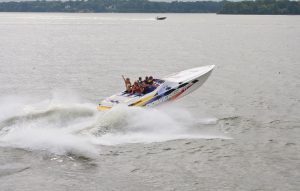 In addition to Meshinsky taking the overall victory, other winners included Alvin Esh of Intercourse, PA, who took second place with a Four-of-a-Kind, Kings High (with an Eight) running a 43’ Black Thunder Big Toy. In third place was Colonia, NJ-resident, Anthony Amalfe in his 38’ Cigarette Top Gun who played a third Four-of-Kind (consisting of four four’s), while in Fourth was Ambrose Fayola of Feasterville, PA, aboard his 33’ Power Play “Want to Play” after drawing a full house (consisting of Three Queens and two Four’s). Amalfe also took Fifth Place with another Full House (consisting Three Jacks and two Sevens) following the purchase of a second card hand.

It was early as 10:00 a.m. Friday morning when the staging area of Anchor Marine and The Nauti-Goose Restaurant began bustling with activity. Crews with boats in tow, and some even with RVs, rolled into North East, MD, for anticipation of a great weekend. With clear skies and sunshine overhead, the 12th annual event was off to a strong start as the participants began settling into the slips.

The Town of North East is a quaint shore side community offering access to the North East River where many water-based activities are enjoyed throughout the summer months. Shopping and dining can be enjoyed along its scenic main street and the town park is a great place for families to enjoy a quiet afternoon with its picnic tables, pavilions, and playgrounds.

By the time registration opened at 2 p.m., participants were already mingling along the slips and enjoying the excellent service of the Nauti-Goose. Anchor Marine, one of the largest boating service and sales center in the area, was the perfect venue for the run with its first-rate launch ramps, docking facilities and services are considered by many to be on par with such Florida hot spots located in Fort Myers, Cape Coral, Key West and Miami. 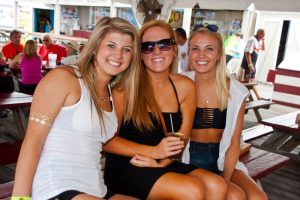 “The entire area, including Anchor Marine, the adjoining Nauti-Goose and all the docking was extremely accommodating and provided an excellent atmosphere for the participants,” explained Taylor. “Butch of Anchor Marine and his son opened his doors to everyone and the players enjoyed the Nauti-Goose with its first rate service, food and docking.”

Another participant who made the event exciting was long-time Chesapeake Bay runner, Mike Cassidy, who brought his Mercury Racing-powered 47’ Fountain Fighting Irish. Cassidy, in recent years, had his engines rebuilt by Sarasota’s very own Ron Potter of Potter Performance. The engines just scream with power and it’s not hard to miss Cassidy on the water with his Fountain’s shimmering “Irish” green graphics.

It was also the support of avid poker runner Richard Thomas who brought more excitement by bringing along his fellow boaters, while Darrell Kirban of Kirban Customs
was also instrumental in supporting the efforts for our event. Of course, Victor DiMarco, the producer of the The Thunder in the City run and owner of DiMarco Marine, was on hand to work with PRA for the awards ceremony and the Champion of the Chesapeake ceremony. 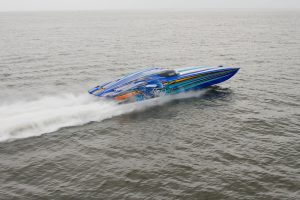 Another notable participant included former offensive lineman for the New York Giants, Brad Benson, who was in a real rushing mode for the run as he displayed his 52’ MTI Pass Blocker powered by a set of Mercury Racing’s mighty twin 1650 hp powerhouses. What was interesting was the players ran on the same waters as legendary Joe Horisk, of the popular 43 flat-deck Wellcraft Scarab fame that packed triple 800 hp powerhouses. Known throughout the performance boating community as simply Smokin’ Joe, Harris represented Wellcraft Scarab at poker run events throughout the late 1980s and 1990s at a time when Scarab was one of the leaders in the offshore world and went head to head with Baja Marine, one the premier performance boat builders of the time.

Following registration, after the boats were fueled with 93 Octane and the trailers secured on the grounds of Anchor Marine, the participants made their way to the welcome reception at the Nauti-Goose where they enjoyed cool beverages and complimentary Hor’s D’oeuvres.

The next morning, after an excellent breakfast, the driver’s meeting and the drawing of the first card at the Nauti-Goose, participants prepared for the first leg of the run. What was more exciting was Poker Runs America set up its enclosed, air conditioned Speed Zone Theatre where poker run events and offshore races were presented on large video screens, offering the opportunity for spectators to view the action and understand what takes place at a poker run. As some of driver’s in the video footage were also in attendance, spectators had the chance to speak to them personally about their experiences and exotic hardware. 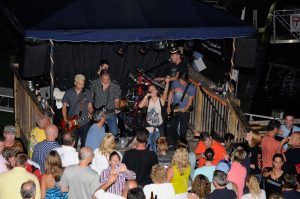 Even though the weather consisted of cloudy skies with a chance of rain, spirits were at an all-time high. With up to 45-plus boats, and with expert lensman Randy Nuzzo of Powerboat Photos over head in the helicopter capturing all the action, the start of the run went without a hitch as the power pack blasted their way from Anchor Marine to various card stops including Still Pond for Card 2; Middle River-Sue Creek for Card 3; then it was a nice run to the Lunch Stop and Card 4 at Waterman’s Crab House in Rock Hall.

Following lunch, some of the group enjoyed a relaxing raft-up at Jelly Fish Joel’s for the afternoon, before returning to Anchor Marine for the awards ceremony. The excitement continued that evening at the Nauti-Goose for the awards and unveiling of the cards, where the players were served excellent appetizers, followed by prime rib, crab’s legs and pecan-crusted chicken as the main courses.

Following the announcement of the winners, participants mingled throughout the night, enjoyed the excellent beverages, and took in the excellent live entertainment.

Be sure to mark your calendars for August 22-23, for the 2015 Rock The Bay Poker Run. For more details visit  www.pokerrsunsamerica.com or contact coordinator@pokerrunsamerica.com PRA