Cobalt has done it again. Hard on the heels of the radical-chic A-Series sport boats, the Kansas-based luxury specialists have brought us their first deck boat. A deck boat. Some would suggest a decade too late, but the reality of sales figures demonstrates a recent increase in popularity for this practical, enjoyable, hull format.

Cobalt’s slogan for their Sport Deck is “Fun Follows Function” and the design is unique. Whereas many deck boats look like a clumsy attempt to bond a pontoon platform to a runabout, Cobalt has carefully expanded the hull and interior to accommodate the palatial space and luxe amenities we would expect from Cobalt’s version. The expansion was accomplished by employing what has been variously described as a “modified tri-hull” or “split-chine” design. 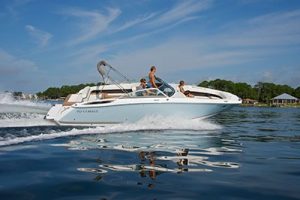 A departure for Cobalt, when attempted by other manufacturers this hull shape usually results in a pickle fork nose or a clumsy scow-bow. Cobalt has managed to avoid both of these aesthetic pitfalls. The sides rise vertically from the waterline to a dramatically high freeboard, giving the boat a solid and robust profile – a phenomenon enhanced by the acres of uninterrupted black gel coat on our test boat. At the dock, this boat had a menacing aspect, underscored by the illusion of machine gun ports in the bow, actually the LED docking lights, and Cobalt’s own telescoping boarding ladder. Our 26SD tester would look right at home in a James Bond movie!

Powerful dock presence notwithstanding, checkout the profile of the SD in this editorial feature and you’ll see the SD has a stylish image at speed when the craft is in motion. However, we would still prefer the lights tucked under the bow and there’s no reason why the ladder couldn’t be hidden beneath the anchor hatch. 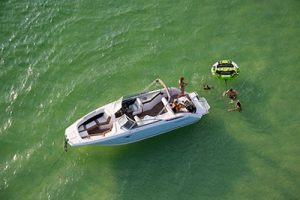 The featured image also provides a good view of the hull’s undersides. Like we said, a major departure for Cobalt. We’re used to Cobalt vee-hulls that rise effortlessly on plane, travel faster than their size and as weight and power would predict, ride like an island and handle with sports car aplomb. The 26SD has lost none of that. In fact, it has gained somewhat in agility. The boat pivots around those massive chines like a slalom skier at full cut. Boats that grab the water in a turn often exhibit some misbehavior, sometimes scary, when really pressed. Nope, the 26SD behaves…like a Cobalt.

Some of that traction derives from the Volvo DuoProp hanging off the stern. The counter-rotating propellers have their own water-grabbing qualities that, we suspect, contribute to the SD’s good manners. Motivated by a 375 hp Volvo big block, the twinned props also launch the 5,500 pound SD on plane in no-fuss Cobalt style and will set the big deck boat skimming at more than 50 mph. This was also the quietest Volvo big block installation we’ve ever experienced. With no odd induction noises or low frequency harmonics, this 8.1 L GI was unobtrusive in the extreme. In the helm area, normal conversation was possible and running with the engine cover partly open we discovered that, not only was this big block naturally quiet, but the Cobalt engine compartment offered a high level of insulation. 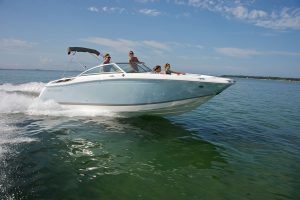 Performance, however, is only part of the deck boat equation. On board the SD, it’s all about space. Not just creative seating arrangements, but with the wide (91”/2.3m) cockpit and expanded bow, the 26SD has that welcoming sense of open, airy, and nobody’s crowded feeling. Aft, the port side is dominated by a long banquette that includes the helm area and blends into the huge sun pad on top of the motor box. The side bench and the stern lounge feature Cobalt’s “flip backrest system” that allows the seat back to serve in both directions. Walk-thru to the swim deck and you’ll find the marvelous fold-out platform extension introduced two years ago. 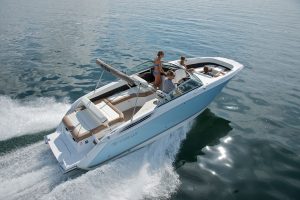 The starboard’s “entertainment center” has been kept slim and tidy, plenty large enough to serve its purpose, but it doesn’t impact on the living area. And the head gets a gold star. Capacious, with a big door, good ventilation and lighting, this area has been skillfully tucked under the port windshield deck, intruding minimally on the boat’s interior. Full marks.

Up front, bow seating is wide open with a dedicated lounger on the port side and a very comfortable easy chair to starboard. That comfort is enhanced by Cobalt’s new flip-down armrests. In use, they’re wonderful. But we would have like to have seen the arm rests integrated with the seats.

Overall, Cobalt has chosen to give the upholstery an edgy, angular style with squared off corners and blocky seat backs. It’s another departure from the more curvaceous and classic Cobalt style we’re used to. Cobalt offers three palettes for the 26SD, brown dominated our test boat. But there’s no debating the quality and craftsmanship. Cobalt’s choice of materials, the stitching, fit and finish truly do set the industry standard.