As Poker Runs go, there are large events, and small events, exotic venues, and destinations in the heart of North America’s most popular tourism regions, but nothing in the world of performance boating compares to the elegance of the annual Poker Runs America Casino Lac-Leamy weekend, where the five-star accommodations entertainment and gourmet dining elevate the boating experience to an entirely new level.

It truly was weekend of opulence in the finest tradition of the lifestyle of the rich and famous, when a select group of up to fifty Poker Runners took over the Casino Lac-Leamy Marina adjacent to the luxurious Hilton Lac- Leamy Hotel in Gatineau, Quebec, just across the river from Ottawa. The view from the five-star suite said it all – glance to the west, and you see the magnificent Parliament Hill, the seat of Canada’s federal government… look to the south, and the beautiful rolling hills of Quebec’s Gatineau region beckon with scenery that is unsurpassed in North America… glance down from your penthouse balcony, and you can see the Poker Run fleet moored in the tranquil marina lagoon… it’s an idyllic setting that is truly beyond comparison.

The Casino Lac-Leamy Poker Run encompassed a full weekend of activities, with boaters and their guests registering on Friday, August 24, at the Hilton’s convention centre, and then proceeding to the launch facilities at nearby Gatineau Marina, then travelling just 2 kilometers by water to the mooring area at the Casino Marina.

Secure parking facilities for the tow vehicles and boat trailers were provided on the grounds, under the watchful eye of Casino security.

Once the boaters settled in to their rooms, it was time to party Brazilian style at the Hilton’s Terrasse Restaurant L’Arome, where everyone had a chance to socialize with their fellow Poker Runners, and enjoy some of the most incredible barbecue delicacies on the Poker Run circuit.

As a major entertainment venue, the Casino Lac-Leamy offers live entertainment of the highest caliber, and they pulled out all of the stops for our group, with a live band – a spectacular evening of music and dancing that had all of our guests buzzing with excitement.

Now, it would be a shame to spend a weekend in the Casino without trying your luck, so our hosts staged a Friday Night Poker Runners Black Jack tournament – the High Roller Poker Run Group competed for a $5,000 prize, and the High Stakes Poker Runners hit the tables in pursuit of a complimentary Hilton Hotel and Casino Weekend Package.

We started the day with an 8:00 a.m. gourmet buffet breakfast at the Casino Banco Restaurant, and then the drivers and navigators headed off to their mandatory pre-run meeting in the Casino’s Salon Royale. The Quebec Provincial Police Marine Unit was on hand to welcome the group, and provide safety guidelines, while the PRA staff described the navigation waypoints along the Ottawa River.

It was a day filled with beautiful sunshine and the waters were perfect for performance boating when our Poker Runners headed for the docks to fire up their engines. We assembled on the water for the traditional announcement of “Gentlemen, start your engines” at 10:00 a.m., and the group did a “fly by” salute to the thousands of spectators who lined the riverbanks, before setting course for Parc La Baie. A support fleet of volunteer marshal boats escorted the Poker Run boats through the popular recreational areas, assuring the safety of all concerned, and then it was throttles down for the next leg of the route to Rockland Municipal Marina, where Pierre Lemieux, the Deputy Member of Parliament for the riding and Richard Lalonde, the Mayor of Rockland, welcomed the Poker Runners, as hundreds of spectators cheered the boats.

The on-site logistics were handled by volunteers from the Rockland Lions Club, and Dave Bodner’s marshal boat fleet was based at the Rockland Municipal Marina. The town provided a very nice souvenir gift bag in addition to the Poker Run card.

As tradition dictates for the Casino Lac-Leamy Poker Run, our group headed to the magnificent Fairmont Chateau Montebello for a lunch to remember – nestled in the wooded shoreline of the Gatineau Hills, Chateau Montebello is the largest log structure in the world. The Chateau has been host to world leaders and entertainment celebrities throughout its 79-year history, including many Presidents and members of the Royal Family… imagine walking in the footsteps of Roosevelt and Churchill, Princess Grace, Bing Crosby, and a list of dignitaries of the 20th and 21st centuries!

Following the lunch activities, the Poker Runners headed off to the Golden Anchor Marina in Hawkesbury for a high octane fuel stop, and then it was time for the final leg bringing everyone back to the Casino docks by 4:30 p.m.

With all of the Poker Run card envelopes in the hands of the judges, the participants were treated to a cocktail reception followed by a gourmet dinner at the Grand Salon Hilton Lac- Leamy, where the cards were revealed and our winners declared. Bill Taylor welcomed everyone, and brought the awards presentation to center stage, before handing the microphone over to our MC, Dave Kirkland for the official reveal of the poker hands, starting with announcement of the “wild card” winner, Michel Miller, who took home a $3,000 Gevril Swiss timepiece.

Part of the thrill of this event was a special “High Rollers” poker hand, which gave participants a chance to win $50,000 cash… this exciting game involved a Casino-style deal, where competitors picked their cards from a fresh set of five decks…. Under the watchful eye of a closed-circuit camera system, everyone in the room shared the thrill as each player picked five cards from the table, these were handed to the judges, who revealed the first three cards, and kept the remaining two closed – for the moment, and then revealed each hand as the excitement grew.

The venue for the Casino Lac-Leamy Poker Run is so popular that many of our participants extend their stay to spend a few extra days enjoying the recreational boating attractions of the region – it truly is a unique and very beautiful area to visit, filled with northern hospitality that is unparalleled among the Poker Run venues. 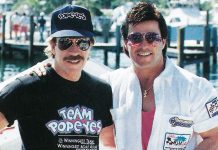