The start of the second leg of the run at the lunch stop in Rockland.

Hosted in the rural riverside community of Hawkesbury, ON, the run not only attracted some of hottest hardware but was held alongside the region’s spectacular Ottawa River Festival, which attracted approximately 7,000 people that came to enjoy the various activities including live entertainment, BBQs, a classic Ford car show, a midway, celebrity chef presentations and more. 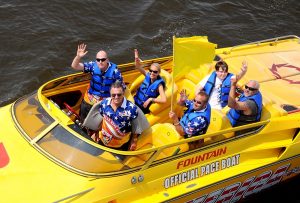 On a special note, Poker Runs America/Power Boating Canada welcomed Chris and Justin LeBlanc of Hawkesbury, ON during the run day aboard the PRA 47’ Fountain pace boat with Mercury Marine’s Adrian Rushforth as well as Nick and Michelle McIntyre of the Sand Banks Estate Winery.

Chris and his son Justin, 12, were provided with a great ride thanks to Claude Theriault (and the efforts of former Mayor of Hawkesbury, Rene Berthiaume) who generously provided the LeBlanc’s with a free boat ride voucher awarded at last year’s Ottawa River Poker Run/Rendezvous.

Justin, who recently lost his leg due to battling Ewing Sarcoma – a rare bone cancer – three years ago, was excited about the opportunity as he and his father enjoyed an exciting day on the Ottawa River. 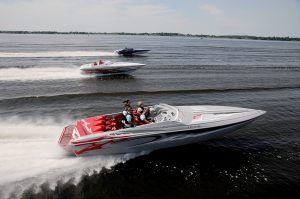 “He loved the ride,” said Chris. “When we came home after the poker run, Justin was exhausted. The speeds high-performance boats go are unbelievable. It was a pretty amazing day.”

The poker run, which began Friday with a series of offshore boats pulling into The Golden Anchor Marina as early as 12 Noon, kicked-off Friday evening at the hosting facility of Deju Vu Restaurant and Bar in downtown Hawkesbury. The players then rejoined Saturday morning at 9:00 a.m. at Deju Vu for breakfast and the mandatory driver’s meeting, which outlined the rules and regulations of the run.

At 10:30 a.m. sharp, the boats pulled out of the Golden Anchor Marina to the open water for the start of the event. At the revving of the 47’ Fountain pace boat, the water mixed from blue to white as the group throttled up and made their way to the first and second card stops, which was followed by a solid blast to a catered lunch in Clarence-Rockland. 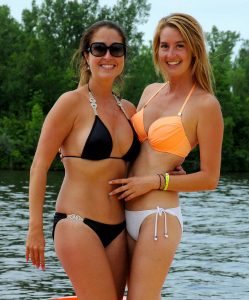 Following lunch, it was a matter of being dealt the remaining of the cards and enjoying an afternoon blast back to Hawkesbury for the playing of the Wild Card, enjoying an excellent wine tasting in Confederation Park (provided by the local Sand Banks Estate Winery) and taking in the amazing, high-flying feee-style motorcross spectacle by Jason Thorne and Metal Mulisha.

Later in the evening, the players returned to Deju Vu for a great dinner and the much-anticipated unveiling of the cards.

In first place was Patrick Higgins and the Go Fast team who came in full force to take the top spot, while David Caron-Tessier came in second Brian and Wilma Ross won third.

Also sharing the spotlight were the series of players in the Rendezvous portion of the event. Taking first place was Claude Racine and Linda Caron, while Rene Berthiaume came in second and Yves Ouellette and his crew came third.

Three additional crews also took the stage including Mario and Evelyn Garand who were recognized for the Best Dressed Crew Award, Jean-Luc Sigouin and crew who won The Most Exotic Engine Compartment Award, while Stan and Inez Quinn were other lucky players after taking winning the Wild Card Hand earlier in the day.

The 2015 Ottawa River Poker Run was just the second stop on our 2015 Tour, be sure to check all the details for the upcoming Bay of Quinte Poker Run/Rendezvous July 24-26 and The 1000 Islands Poker Run August 7-9.