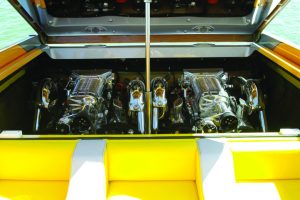 s say you’re in the middle of the start of a poker run. Everyone is jacked up. Drivers have a heavy throttle hand and a twitchy second one on the wheel. Would you want to be in a boat that’s slow to react to change or one that’s quick to respond to your input?

Obviously, you’d want to be at the wheel of the quicker boat and if you were at the helm of the Laveycraft 32 NuEra, you would be. With twin Teague Custom Marine 800 EFIs and TCM Platinum XR drives, the boat has amazing mid-range acceleration. Running from 50 to 70 mph took only 5.5 seconds. And when I hit the gas at 60 mph, I reached 80 in only 5.6 seconds.

I had the chance to check out the three-year-old model with the big power the day before the 2007 Desert Storm Poker Run on Arizona’s Lake Havasu. The next day, I had the rare opportunity to watch it run in confused conditions during the run. The 32 NuEra impressively worked its way through the confused conditions.

You wouldn’t necessarily expect that a tall-sided boat less than 35’ long would be at its best in these kinds of conditions, but the 32 NuEra benefits from an unusual twin-stepped bottom design. While most steps run at a slight angle aft from the chine to the keel, those employed by Laveycraft are serpentine or “S” shaped as they run aft from the chine to the keel. This results in more even lift across the bottom. There’s still plenty of keel in the water, but the steps pick it up evenly across the surface.

I ran my test with Laveycraft co-owner Chris Camire. He and his brother Jeff run the Corona, Calif.-based company as a potent one-two punch. Chris is a hands-on exceptional rigger so he makes sure that every detail is covered on every Laveycraft from the 21 XCS to the 32 NuEra.

While Jeff runs more of the day-to-day management, he can still often be found in the spray booth plying the skills that earned him a reputation as one of the finest gelcoaters in the West Coast Custom game. The detail work on my test boat was amazingly intricate with a stenciled green snakeskin pattern on a yellow hull and deck.

minutes, I had the 32 NuEra up to 108 mph and even when I had to make a slight course adjustment at 95 to 100 mph, the boat responded well. I put the 32 NuEra through a battery of tests, including slalom passes at a variety of speeds, circle turns and even trimmed down all the way at 90 mph, a move that can often trip up a stepped bottom boat. My test model mastered everything I threw at it with ease. It was truly a pleasure to drive. 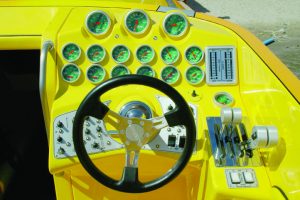 Speaking of the power in our test boat, the TCM 800 EFI is a potent, compact package that lets manufacturers high-output engines in the same spot where a conventional non-supercharged engine would fit. A big part of that is the low-profile intercooled 3.3 Whipple supercharger and electronic fuel injection system that save a bunch of height over old-school carburetors and roots-style blowers. The 509-cid engine is built with all the right stuff. Depending on customer choice, Manley or Carrillo connecting rods link the JE forged aluminum pistons to the forged steel crankshaft. Brodix aluminum heads are match-ported to the block and valves are stainless steel on the intake side and inconel for exhaust. The valvetrain features a Crane hydraulic roller cam and lifters, Manley pushrods, Isky valve springs and Crane roller rocker arms. For the proper appearance, the engine is dressed with TCM polished aluminum valve covers with breathers and it exhales through Custom Marine Inc., E-Top stainless-steel headers.

Those engines linked to, what else, TCM Platinum XR upgraded Bravo drives with 1.32: ratios. Mercury Racing 15 x 32 five-blade Maximus stainless-steel propellers were set up to rotate to the outboard side. Tabs were Mercury Racing 280-S K-planes and the full hydraulic steering was from IMCO.

With the engine hatch up, I got a look at some of the cleanest rigging you’ll ever find. The engines were installed on full stainless-steel cradle mounts secured to through-bolted aluminum L-angles. Rigging featured all stainless-steel cushioned clamps in perfect parallel runs. Batteries are secured in Eddie Marine billet aluminum boxes, two to port and one to starboard. Trim pumps for the drives are on the firewall bulkhead, while those for the tabs are aft on the transom, still in reach to top off and fitted with TCM reservoirs. TCM also provided the extra-large fuel filter mounts and all fuel lines are Aeroquip 5/8”. The engine builder also provided the strainers for the intercoolers. While in the engine compartment I also got a look at the signature Laveycraft Duratech clear coat finish over the balsa coring. Not only does it look, cool, the clear-coat is practical. “If this was painted, we couldn’t see failures in the laminate,” said Camire. Baltek balsa coring is used throughout the 32 NuEra and all is vacuum-bagged in place. The stringers, bulkheads and even transom are also balsa panels and what’s interesting in the transom is that the high-density material actually has grain running fore and aft instead of vertically or across the span. Additionally, the cockpit is constructed with a full liner. When the primary pieces of the boat are assembled, they are bonded together, and the hull-to-deck joint is bonded around the perimeter with fiberglass.

In the cockpit, the attention to details was astounding. The stainless-steel grab rails were symmetrically sanded and matte finished with a clearcoat so that it looks like brushed aluminum. The shape is easier to grip for passengers seated on the deep aft bench, which has stowage in the base, or standing up. At the helm, Lavey finished the Livorsi gauge faces in the same pattern as the green snakeskin-like stripe to match the graphics.

Forward there’s an Eddie Marine glove box ahead of the port bolster and steps molded into the console make it easy to get on deck. To starboard, those custom Platinum Series gauges are arranged with tachometers flanking the 140-mph speedometer up top and in the middle, primary engine monitors include oil pressure, water pressure and boost instruments with those for water temperature, volts and fuel pressure across the bottom. Bluewater Performance mechanical indicators keep you apprised of drive and tab position. The trim switch for the drives is on the throttle lever, with those for the tabs abaft the sticks. It’s a good spot. If they were ahead of the throttles, it would be too tight to get your hand in there. I also liked the custom feel of the aircraft-style ignition switches instead of keys. While the bolsters have manual dropout bottoms, I preferred driving the boat while seated.

Belowdecks, there’s good seated headroom on the facing lounges and plenty of space to stretch out on the V-berth. Stowage is plentiful in lockers, outboard of the lounge backrests and in the V-berth base. But the 32 NuEra isn’t about the cabin. With the big Teague motors and unique bottom, this boat is a rocketship that’s ready to launch.